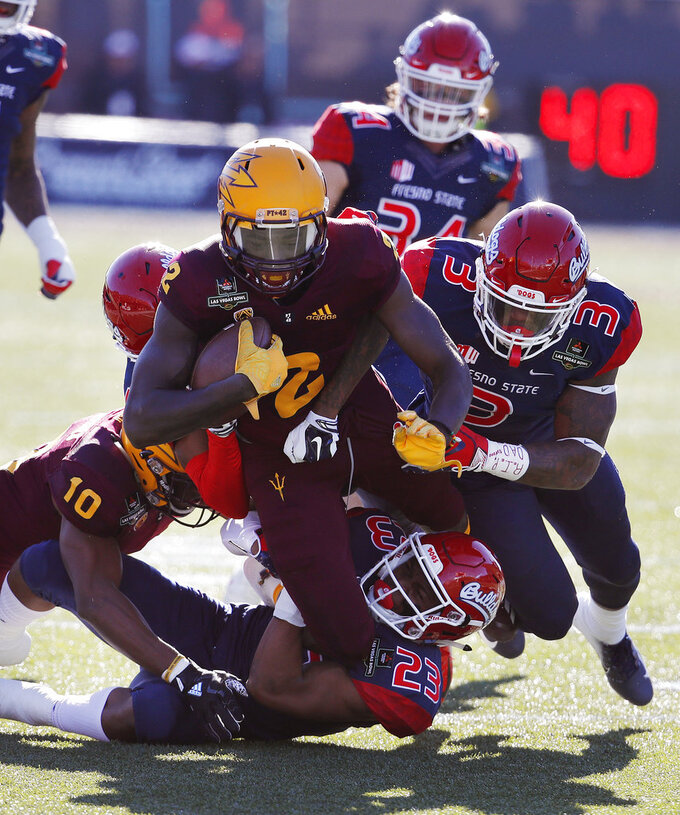 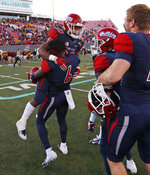 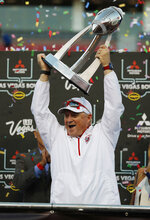 LAS VEGAS (AP) — Running back Ronnie Rivers might be the embodiment of Fresno State's turnaround.

It wasn't guaranteed Rivers would be able to play this season after sustaining a foot injury in spring practice, and he was limited by a shoulder injury late in the year. But Rivers was there, leading the way as the Bulldogs completed their journey after going 1-11 two seasons ago.

Rivers rushed for 212 yards and two touchdowns to help No. 19 Fresno State beat Arizona State 31-20 in the Las Vegas Bowl on Saturday.

Anthoula Kelly had a 70-yard interception return for a touchdown, and Marcus McMaryion rushed for a touchdown and was 15-of-29 passing for 176 yards to help Fresno State (12-2) set a school record for wins in a season.

"It's a group that persevered," Fresno State coach Jeff Tedford said. "This group can be remembered as the only team in NCAA history that went from a double-digit losing season to back-to-back double-digit winning seasons."

Rivers put Fresno State back in front 24-20 with a 68-yard touchdown run up the middle in the third quarter and had a 5-yard scoring run in the fourth quarter to seal it. The Bulldogs were 2-0 against Pac-12 opponents this season, also beating UCLA 38-14 in September.

"We've been emphasizing on the word 'finish' this past week and just going out there and finishing the job, getting this 12th win," said Rivers, who gained 156 yards on 15 carries in the second half and was honored as the game's most valuable player.

Fresno State was able to overcome turnovers on three consecutive drives in the second half, including when McMaryion threw the first of two interceptions to set up Brandon Ruiz's 44-yard field goal that gave Arizona State a 20-17 lead.

Dejonte O'Neal also fumbled off the pylon when reaching out to score on a throwback screen.

"But I think it says a lot about our team," Tedford said. "Our team plays together, believe in one another. They don't panic and they just keep playing."

Eno Benjamin rushed for 118 yards a one touchdown for the Sun Devils (7-6) in their third straight bowl loss. Manny Wilkins threw for 129 yards, with a 3-yard scoring pass to Kyle Williams and two interceptions.

First-year coach Herm Edwards put the loss on the failure to score points off takeaways, getting three points following the three Fresno State turnovers. Arizona State had 63 yards of offense in the second half.

"We made it a game we wanted to play in. We made it uncomfortable for them," Arizona State coach Herm Edwards said. "But then they got a score. We had to catch up a little bit and that's where they can really come after you."

Benjamin set the school single-season rushing record on a 13-yard run in the second quarter, finishing with 1,642 yards rushing to break Woody Green's mark of 1,565 yards in 1972.

Wilkins said he did not sustain an injury despite taking a hit to the knee on the final pass of his college career, which was intercepted by Juju Hughes.

"I'm good. I left it all out there, so that's all I needed to do," Wilkins said.

Arizona State: The Sun Devils will be disappointed to finish with the exact same record as last season, but signs of progress under Edwards were evident. The defense found several young playmakers and played well against Fresno State without freshman linebacker Merlin Robertson. The offense, which played without star wide receiver N'Keal Harry after he declared for the NFL draft, needs to be upgraded to contend in the Pac-12.

Fresno State: The Bulldogs used a strong second half to complete its best season in school history. The senior-heavy offensive line led the way for Rivers, who will be the focal point of the offense in 2019. With a 22-6 record in two seasons at Fresno State, Tedford has reminded everyone why he is one of the best coaches in college football.

Fresno State will finish the season ranked for the third time in school history and should earn its highest final-ranking ever. Arizona State could merit consideration from voters in the preseason poll.

Arizona State: The Sun Devils need to replace Wilkins, and with commitments from three top high school quarterbacks, it seems his successor might not have been in uniform at the Las Vegas Bowl. If Arizona State can find stability there quickly, the pieces look to be in place to challenge in the Pac-12 South.

Fresno State: The Bulldogs are looking at a major roster overhaul, losing McMaryion, four of five starting offensive linemen and four defensive starters. However, a return to the Mountain West Conference title game isn't an unreasonable expectation based on what Tedford has accomplished in his first two seasons at Fresno State.