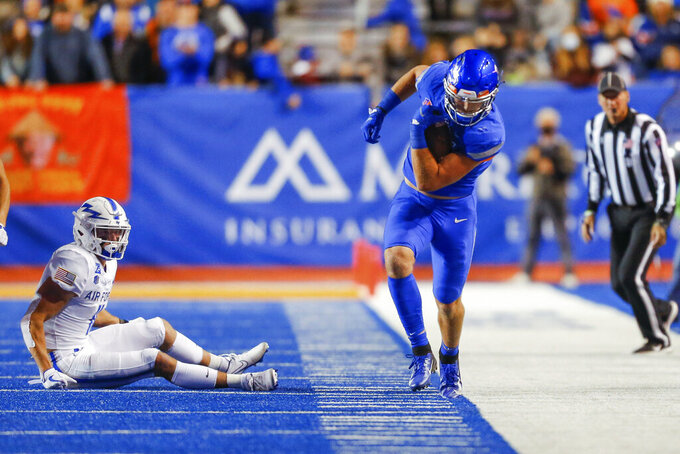 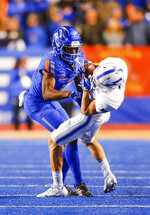 Air Force (6-1, 3-1 Mountain West Conference), which hasn’t started a season this well since 2002 when the Falcons began the season 6-0 before finishing 8-5, snapped a four-game losing streak to the Broncos.

“We really settled in after the first three series and made some big plays when we really needed them,” Air Force coach Troy Calhoun said. “We were able to keep them out of the end zone and came up with some key stops, even at the end of the game to hold them to just a field goal.”

“Everyone knows what the standard is here, whether it’s on the road or at home,” Boise State coach Andy Avalos said. “The standard is the competitive nature and the standard we have on the field is that it gives us an opportunity to be successful. And there are a lot of things we have to continue to improve on. … We had some opportunities and we didn’t execute.”

After falling behind early, Air Force employed the nation’s top rushing attack to grind down Boise State and take a 21-14 halftime lead.

Still clinging to a 21-14 lead late in the third quarter, the Broncos drove deep into Falcon territory to set up a first-and-goal at the 6. But Air Force prevented a score when Alec Mock sacked Hank Bachmeier on fourth-and-goal at the 2.

McKenly O’Neal missed a 30-yard field goal with 11:38 remaining that would have given Air Force a two-score lead, but he nailed a 28-yarder after Boise State fumbled a punt away at its own 15-yard line with 2:49 left to play to up the Falcons’ lead to 24-14.

The Broncos got a 37-yard field goal from Jonah Dalmas with 49 seconds to go and recovered the onside kick, but Tre Bug picked off Bachmeier on first down — setting off a wild celebration along the Air Force sideline that spilled onto the field and drew five unsportsmanlike penalties.

After the win, Air Force players lingered on the field, taking selfies on Boise State’s famed blue turf and relishing a victory in Boise for only the second time in the program’s history.

And Calhoun tried to keep the win — and Air Force’s best start in his tenure — in perspective.

“It’s trite — and I say it over and over — but it’s one game,” Calhoun said. “We need to enjoy this one, but we need to get better and have some things we need to fix. We made a good number of mistakes, but we hung in there and persevered.”

Bachmeier finished with 259 yards passing and a touchdown in the loss, Without leading rushers Cyrus Habibi-Likio and George Holani, the Broncos struggled just to get 78 yards rushing.

Air Force: With the victory, the Falcons are in prime position to represent the Mountain Division in the Mountain West championship game for the first time in school history. With its toughest remaining conference game at home against San Diego State, the spot is Air Force’s to lose just past the midway point of the season.

Boise State: The Broncos’ mystique on the blue turf appears to be waning, if not gone altogether. And while Boise State has played some tough opponents at home this season, its glaring deficiencies running the ball and making offensive adjustments at halftime are keeping the team on a mediocre trajectory, something the program isn’t used to.

Boise State: The Broncos travel to Colorado State on Oct. 30.