Rolovich believes Washington State will be able to play USC 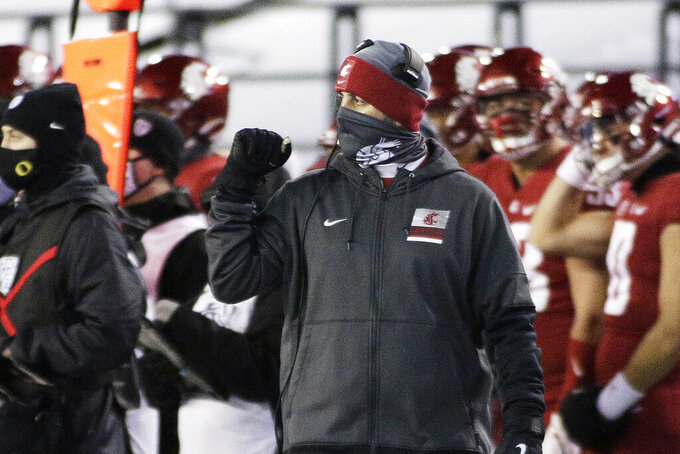 Washington State coach Nick Rolovich walks along the sideline during the first half of the team's NCAA college football game against Oregon in Pullman, Wash., Saturday, Nov. 14, 2020. (AP Photo/Young Kwak)

Washington State coach Nick Rolovich said he believes the Cougars will have enough healthy players to play their next scheduled game on Dec. 4 against Southern California.

Rolovich spoke after the Cougars held their first practice in nearly a week Wednesday. Washington State had to cancel its game at Stanford last weekend and this week’s Apple Cup against rival Washington due to a combination of injuries and players being held out due to positive COVID-19 tests and contact tracing protocols.

"Way more confident than when we canceled Stanford. I think we’ve got a real chance,” Rolovich said.

Washington State athletic director Pat Chun announced during a radio show Tuesday night that the Cougars had 12 football players currently in COVID protocols. Washington State was about to leave for its game at Stanford last Friday when it received test results that ruled out a total of nine players either due to positive tests or contact tracing and placed the Cougars below the 53-man minimum of scholarship players available.

The game against Washington was canceled last Sunday.

Rolovich said he’s already been in touch with USC coach Clay Helton and informed him the Cougars believe they will be able to have their roster back in a position to play.

Rolovich also said he’s holding out hope of rescheduling the Apple Cup against Washington for the final week of the season on Dec. 19 if neither the Huskies or Cougars are in the Pac-12 championship game.

“It’s hard to plan anything this season just because of all the stuff that’s happened,” Rolovich said. “I think the ability to be flexible and the communication throughout the conference has gotten to a point where I think we’re all just trying to help each other get to games.”