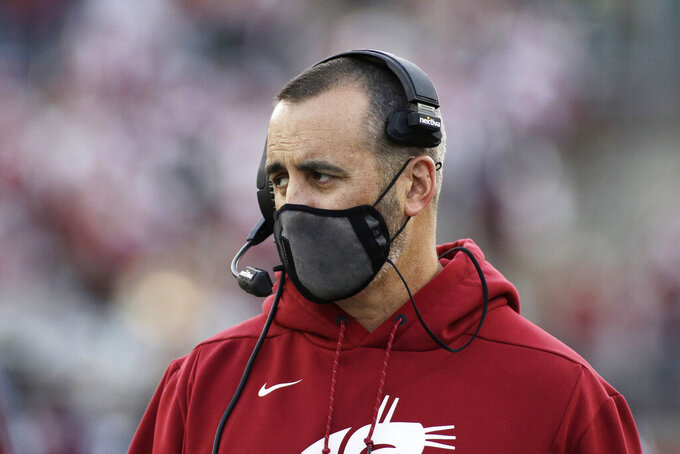 FILE - In this Saturday, Oct. 16, 2021, file photo, Washington State coach Nick Rolovich watches during the first half of an NCAA college football game against Stanford in Pullman, Wash. The NHL suspending San Jose's Evander Kane 21 games for submitting a fake vaccination card and Washington State firing football coach Nick Rolovich for failing to comply with a vaccine mandate Monday provided two more reminders of the impact the coronavirus is still having on professional and college sports. (AP Photo/Young Kwak, File)

Former Washington State football coach Nick Rolovich's termination for refusing to get a COVID-19 vaccination was unlawful and an attack on his Catholic faith, his attorney said Wednesday.

Attorney Brian Fahling also said in a statement that Rolovich intends to take legal action and that the litigation will detail what the attorney called athletic director Pat Chun's “animus towards Coach Rolovich’s sincerely held religious beliefs” and his dishonesty at the expense of the former coach.

Rolovich and four of his assistants were fired Monday for not complying with the governor’s mandate that all state employees be vaccinated against the coronavirus. The attorney said Rolovich was escorted by campus police to his car and not allowed to speak to the team or visit his office after his dismissal.

Rolovich had requested a religious exemption but it was denied Monday, the state’s vaccination deadline.

“The institution also indicated that even if the exemption had been granted, no accommodation would have been made,” Fahling said in the statement.

University officials declined to comment on the attorney’s statement.

The statement didn't specify Rolovich's religious grounds for seeking an exemption and the coach himself had declined to discuss details in recent weeks.

Pope Francis and the U.S. Conference of Catholic Bishops have stated that all COVID-19 vaccines are morally acceptable and that Catholics have a duty, responsibility or obligation to be vaccinated. However, some Catholics still oppose vaccination.

Statewide, about 1,800 workers have been fired, resigned or retired because of the governor's mandate, state officials said. Rolovich was the highest-paid state employee in Washington at $3.2 million per year. He was fired for cause and will not be paid the balance of his contract.

Rolovich was hired from Hawaii two years ago, after Mike Leach left for Mississippi State, and led Washington State to a 1-3 record in the Pac-12 in a 2020 season cut short because of the pandemic. He finished with a 5-6 record in Pullman.

He was replaced for the remainder of the season by Jake Dickert, the Cougars' defensive coordinator who was elevated to acting head coach.