Rosier has his QB job back at Miami, and now aims to keep it 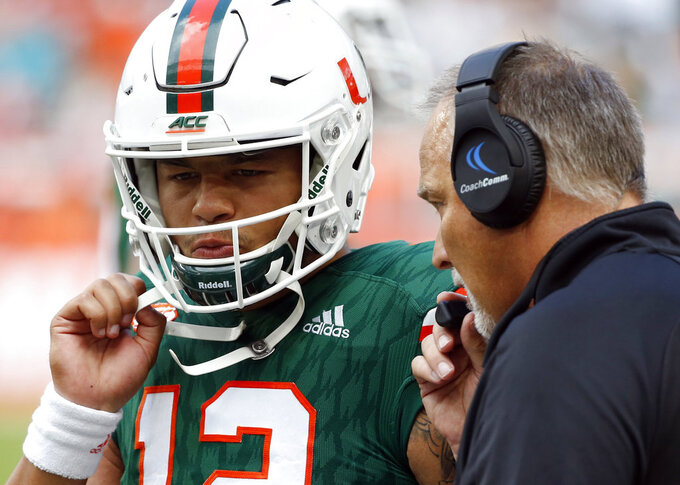 FILE - In this Oct. 14, 2017, file photo, Miami head coach Mark Richt talks with quarterback Malik Rosier (12) during the first half of an NCAA College football game against Georgia Tech in Miami Gardens, Fla. Miami has changed starting quarterbacks again, with Rosier returning to the first-string spot that he lost to N'Kosi Perry three games ago. (AP Photo/Wilfredo Lee, File)

CORAL GABLES, Fla. (AP) — There are two distinct truths about Miami quarterback Malik Rosier, and they don't go together.

His passing percentage is mediocre.

His winning percentage is fantastic.

The backup-turned-starter-turned-backup is now the starter again for the Hurricanes, who visit Boston College on Friday night knowing that a loss could likely doom whatever realistic hopes they have of winning a second consecutive Atlantic Coast Conference Coastal Division title. The stakes are high now, and Rosier understands the significance.

"We've got to come out and execute every play," Rosier said.

That's not been the easiest task for Rosier.

He's 14-4 as Miami's starter, got the Hurricanes to the Coastal title last season and has gone 5-1 in his regular-season road starts. Some Miami fans hopped on social media to complain about Rosier getting the starting job back from N'Kosi Perry, saying his 52 percent completion rate this season simply isn't good enough.

"I understand that I haven't been playing the greatest," Rosier said.

But he wins. And that's what matters most to coach Mark Richt right now.

Rosier felt he had done enough to keep his job, especially after throwing for two scores and running for three more in a September win at Toledo. Richt thought the time was right to give Perry a chance, then wound up going back to Rosier during Miami's loss two weeks ago at Virginia. Richt met with Rosier back at home after that game, and before long the quarterback order on the depth chart was flipped again.

The atmosphere in Chestnut Hill, Massachusetts after sundown Friday will not be pleasant for Miami (5-2, 2-1).

The Eagles (5-2, 2-1) are 4-0 at home this season, winning those games by an average of four touchdowns. It's the annual "Red Bandana" game, where Boston College will pay tribute to former Eagles lacrosse player Welles Crowther — who is believed to have saved at least a dozen people during the terrorist attacks in New York on Sept. 11, 2001 before he died.

And if that wasn't enough, Boston College is just feasting on opposing quarterbacks.

The Eagles have given up eight passing touchdowns all season, only one of those on their home turf. They're coming off a game where they registered seven sacks against Louisville, and opponents are netting only about 6 yards per pass attempt.

"They're a super-strong, mature, solid football team that will get after you," Richt said.

But Rosier has been in these spots before. He's completed only about half (98 for 194) of his passes in the six road regular-season starts, but he's put up 18 touchdowns (four of them rushing) against only four interceptions in those games.

"I think Malik is just better equipped from his abilities and his experience to lead this team right now," Richt said.