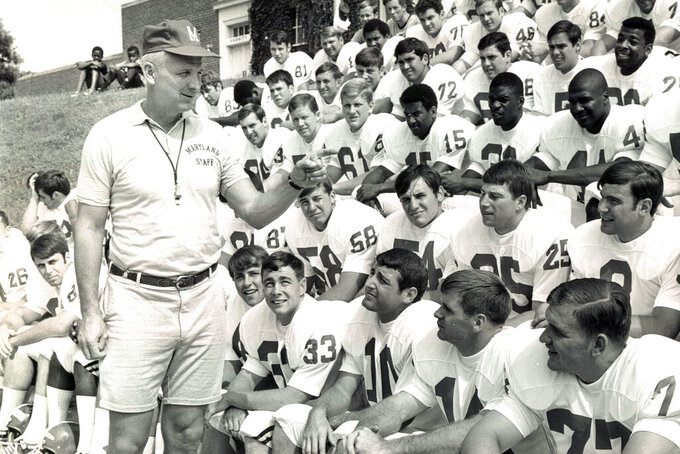 This Sept. 1, 1969, photo shows Maryland football coach Roy Lester greeting Maryland NCAA college football players on picture day in College Park, Md. Lester, who sandwiched a disappointing three-year stint as Terrapins coach between a highly successful career at the high school level, has died at the age of 96. His daughter, Amy Lester Greco, says her father died Sunday, May 3, ,3030, in Rockville, Maryland, due to complications from the new coronavirus. (Paul Hutchins/The Baltimore Sun via AP)

Roy Lester, who sandwiched a disappointing three-year stint as Maryland's football coach between a highly successful career at the high school level, has died. He was 96.

Lester's daughter, Amy Lester Greco, said on a Facebook post that her father died Sunday in Rockville, Maryland, due to complications from the new coronavirus.

“How blessed I am to have been his only daughter," she wrote. “I am not a perfect person but everything good about me came from this beautiful man."

Lester made a name for himself in Maryland during a 10-year run at Richard Montgomery High School in Rockville during which the Rockets went unbeaten six times and had an 86-10-1 record.

That led to him being hired in 1968 to coach at Maryland, where he inherited a program that won only two of 19 games over the previous two years.

Lester guided the Terrapins to a 3-7 record in his first year and went 2-9 in each of the next two seasons before being fired. He was followed by Jerry Claiborne, who led Maryland to seven bowl games over 10 seasons.

In a Twitter post, current Maryland coach Michael Locksley said of Lester: “He came up the ranks as a high school coach and took over during a tumultuous time. He laid the solid foundation for the Claiborne era."

Lester returned to high school coaching in 1972 and won three state championships over the next 15 years while coaching at Paint Branch and Magruder.

When he retired in 1993, Lester had won 260 games at the high school level, a far contrast from his 7-25 career record at Maryland.

Though it's been decades since Lester coached at Richard Montgomery, those who knew him there remember him vividly.

Jim Riggleman played baseball at RMHS as a sophomore and junior when Lester was at the school. Riggleman’s brother, Mickey, was a defensive end for Lester on those powerhouse Rockets teams.

Jim Riggleman grew up to be a major league manager with five teams. Speaking Tuesday from his home in St. Petersburg, Florida, the 67-year-old recalled how friendly Lester was during his time at Richard Montgomery.

“If you played any sport there, he knew who you were and who your family was. Coach Lester taught physical education and really impacted the whole school," Riggleman said. “He loved baseball. We had a lot of good talks about the game. He would sometimes come down to spring training with my brother. It was great to see him there."

Riggleman was among many Richard Montgomery grads who paid homage to Lester long after the coach retired.

“Every year between Dec. 25 and Dec. 31, there was something I guess you’d call the Roy Lester Get-Together," Riggleman said. “One of his ex-players would organize it and we’d all meet at a place up the road in Gaithersburg. We’d sit around and tell stories and he loved it. I guess it’s gone on about 35 years now. And I’m sure we’ll have it this December to remember him."

Lester grew up in Spencer, West Virginia, and attended college at West Virginia University, where he lettered in football, basketball and baseball. He graduated in 1949 with a degree in political science.

He began his coaching career in 1950 at Walton High School in West Virginia. After two years there, Lester moved on to Allegany High School in Cumberland, Maryland. He was an assistant coach at Maryland for three years before taking over at Richard Montgomery.

One of the stars of Lester's first teams at Richard Montgomery was Mike Curtis, a bruising fullback who went on to shine at Duke and as linebacker in the NFL. Curtis died last month in Florida.