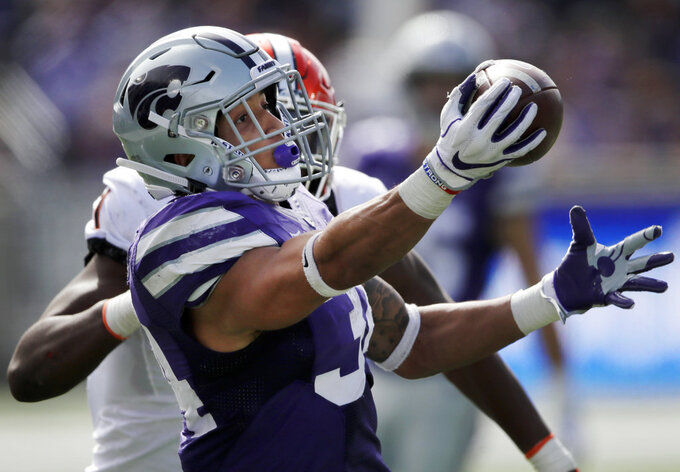 FILE - In this Saturday, Oct. 13, 2018, file photo, Kansas State running back Alex Barnes (34) catches a Skylar Thompson pass while covered by Oklahoma State linebacker Calvin Bundage, back, during the second half of an NCAA college football game in Manhattan, Kan. This season, four Big 12 backs are averaging at least 100 yards rushing per game in conference action.(AP Photo/Orlin Wagner, File) 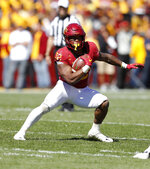 The Big 12 has its share of stars at those positions again, but this season they share the marquee with the running backs. Last season, only Oklahoma State's Justice Hill averaged 100 yards per game in league play. This season, four Big 12 backs are averaging at least 100 yards rushing per game in conference action — Hill, Kansas State's Alex Barnes, Iowa State's David Montgomery and Oklahoma's Kennedy Brooks. A fifth, Kansas' Pooka Williams, is averaging 100 yards rushing for the season and ranks in the top 20 nationally in yards rushing per game.

"He's a big guy with a lot of physicality, but also has big play ability and then, you can tell he really understands their schemes," Riley said. "He's very patient, like the great Kansas State backs are. Really sets up the blocks well."

Barnes ran for 819 yards last season, and he has carried even more of the load this season. He rambled for 250 yards and three touchdowns against Baylor, then followed that with 181 yards and four touchdowns on 34 carries against Oklahoma State.

"He's playing well in all categories, and yet, for the most part, that's not a surprise to anybody and something we've seen in recent years, especially last year," Kansas State coach Bill Snyder said.

Montgomery got off to a slow start this season, but he has posted at least 100 yards in the past three games he has played in. He's coming off a 189-yard performance in a 30-14 upset of West Virginia. Iowa State coach Matt Campbell has heard some compare Montgomery to Kansas City Chiefs running back Kareem Hunt, a player Campbell coached at Toledo.

"I think the comparisons to both those guys are really in their demeanor, in terms of the game of football," Campbell said. "Both guys have a great passion for the sport of football. Those two are great competitors ... David's got a lot of those similarities. He's a guy that between the white lines is phenomenal. He loves to practice, he's engaged, he's competitive. He wants to win at everything."

Brooks is the latest freshman star running back at Oklahoma, following the likes of Samaje Perine, Joe Mixon and Trey Sermon in recent years. He's coming off a career-best 168 yards against TCU, and he seems to have given Oklahoma the home run threat it lost when Anderson got hurt. Brooks is averaging 10.7 yards per carry in Big 12 games.

"The fun thing for that kid is as far as he is now physically and where he can get to, there's a ton of room for growth," Riley said. "As good as he's playing now, the future can be really bright for him."

Sermon has been the power back to balance Brooks' speed for Oklahoma. He ran for 110 yards and two touchdowns against TCU and has 458 yards and five touchdowns this season.

Hill is perhaps the most important piece to Oklahoma State's success. The Cowboys are 3-1 when he rushes for at least 100 yards and 1-2 when he doesn't. His best game this season was a 189-yard effort against Kansas. He is climbing Oklahoma State's career rushing starts heading into Saturday's home game against Texas.

Texas freshman Keaontay Ingram has given the Longhorns' running game a boost with 75.5 yards per game in conference play.

Williams, a freshman, has rushed for 609 yards this season and averages 6.9 yards per carry. He had 107 yards from scrimmage last Saturday against Texas Tech. He ranks 19th nationally in rushing with 103.3 yards per game.

"Pooka — I don't know if I have the words for how well that guy's played for us," Kansas coach David Beaty said. "He had 19 total touches over 100 yards again (against Tech). Just phenomenal. Some of the things he did, couple of the runs he made — I haven't seen those by a young guy. He is a talented kid, great kid. Gives our team energy every week."