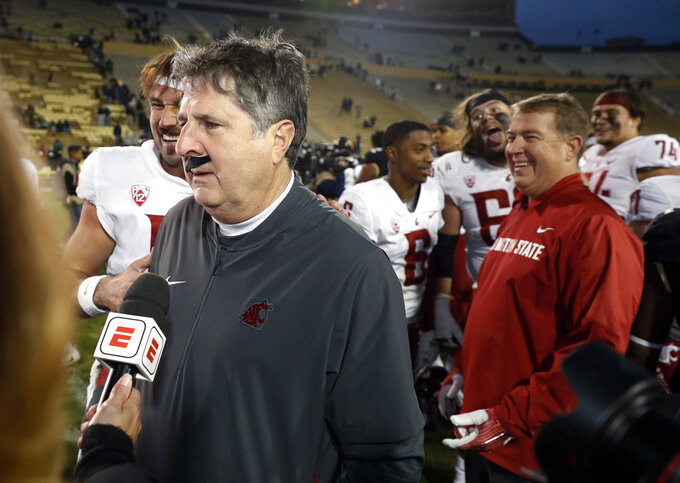 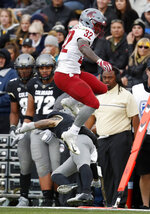 While quarterback Gardner Minshew is getting most of the attention, running backs James Williams and Max Borghi have also helped fuel the rise of No. 8 Washington State this season.

Williams and Borghi play key roles in the complex Air Raid offense, which is mostly geared to passing.

In Saturday's 31-7 blowout of Colorado, the Cougars rushed a season-high 33 times for 131 yards. The two running backs added eight catches for 77 yards and scored a pair of touchdowns.

"I think one of the biggest things was how good our running game was today," Minshew said afterward. "Our O-line and our running backs hit it hard."

Coach Mike Leach likes to point out that the Air Raid depends heavily on running backs who serve as blockers and receivers.

"You have to rush, catch and block at WSU," Leach said. "Not just one of the three. You have to do all three."

The backs have certainly done their part in protecting Minshew, who has been sacked just seven times this season. The Cougars, meantime, have sacked opposing quarterbacks 30 times.

"We got two running backs who can do it all," Williams said.

Washington State (9-1, 6-1 Pac-12) can win the Pac-12 North if it beats Arizona on Saturday night and rival Washington on Nov. 23. The Cougars also have an outside chance of making the College Football Playoff for the first time if they win out.

The Cougars are where they are thanks in part to Williams, a 205-pound junior, and Borghi, a freshman.

Williams, who is from Burbank, California, has rushed for 437 yards and nine touchdowns and he leads the team with 63 receptions, good for 506 yards and another three touchdowns.

"James does a good job of making people miss when he is in space," Leach said. "He can do everything you ask a running back to do."

Williams said he has improved as a rusher by concentrating on hitting holes.

"I used to have a problem with bouncing things out when I shouldn't have," Williams said.

While Williams is a shifty and powerful rusher, the 5-foot-10 Borghi is low to the ground and rushes through gaps in the line. Leach said they complement each other with their play.

Borghi has rushed for 283 yards and six touchdowns this season, and caught 34 passes for 238 yards and four more scores.

Of course, they don't call it the Air Raid for nothing. The Cougars rank first in the nation in passing yardage, but only 128th among FBS teams with an average of 77 rushing yards per game.

Borghi, who was in high school in Colorado at this time last year, has been a revelation. He reminds many of former Stanford standout Christian McCaffrey, who now plays in the NFL. The two have worked out together in the past.

"I don't know where his ceiling is," Leach said. "We are kind of in the business of not having ceilings."

Borghi spurned offers from Colorado and Stanford to come to Pullman.

"Everyone was projecting us to go 3-9 and have a horrible season," Borghi said. "It's been fun proving everyone wrong, and it's pretty much us versus everybody."