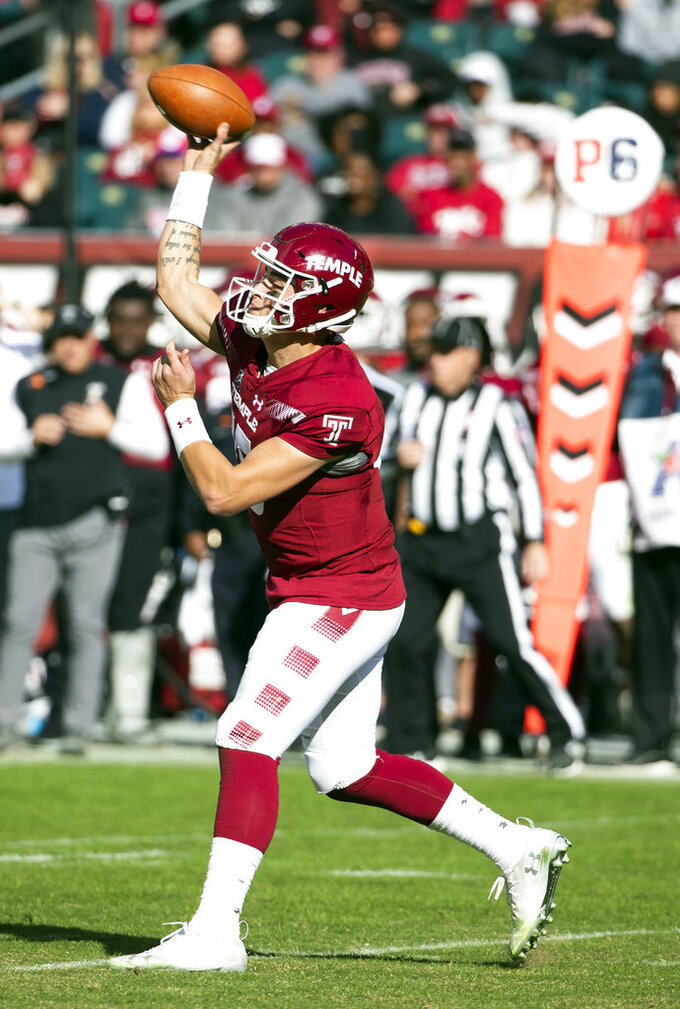 Temple's quarterback Anthony Russo (15) throws a pass during the second half of an NCAA college football against Cincinnati, Saturday, Oct. 20, 2018, in Philadelphia. Temple won 24-17 in overtime. (AP Photo/Chris Szagola) 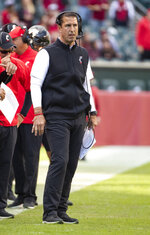 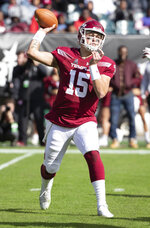 PHILADELPHIA (AP) — After throwing three interceptions, Temple's Anthony Russo came through down the stretch and the Owls handed one of the most surprising teams in the country its first loss.

Russo threw a tying, 20-yard touchdown pass with 49 second left to Brandon Mack, and then a 25-yard TD to Isaiah Wright in overtime as Temple beat No. 20 Cincinnati 24-17 on Saturday.

Russo was 20 for 41 for 237 yards passing, with three touchdown passes and three picks for the Owls (5-3, 4-0 American). He led a seven-play, 75-yard drive in the closing minutes to tie the game with the TD to Mack.

"We just didn't quit," Russo said. "I think that's a big step for our team and something we're going to build on."

Cincinnati (6-1, 2-1) got a first down on its first play of overtime, but an errant snap behind quarterback Desmond Ridder left the Bearcats with second-and-21 and a personal foul pushed them even further back. Ridder was intercepted on third-and-36 by Shaun Bradley to end the game.

"They just took shots," Cincinnati coach Luke Fickell said. "They made some plays down the field and you have to give them some credit."

"You can't get overwhelmed with being 6-0 and forget about the things that got you there," Fickell said. "This is an opportunity for us to quit worrying about the undefeated, the rankings and really kind of go back to work."

Cincinnati's Michael Warren II and Charles McClelland combined for 202 yards on the ground and the Bearcats dominated the middle quarters after falling behind 10-0.

McClelland's 42-yard dash with 6:09 left in the third quarter broke a 10-10 tie and gave the Bearcats their first lead. Warren had 132 yards on 25 carries and scored a 24-yard touchdown in the first quarter.

"We went at them and we just kept chipping away and chipping away," Collins said. "The guys did a great job when it mattered."

The Bearcats picked off Russo twice in the final six minutes, but Temple's defense kept holding and giving the offense a chance. Temple got the ball back after a Cincinnati punt with 2:37 to play and Russo took over from there for a tying drive.

"You could sense and feel a little bit of that going down the stretch there," Fickell said. "Defensively, you play so well for so long and something has to give down the stretch."

Cincinnati: After turning the ball over twice in the first half, the Bearcats' defense was dominant before Temple's final drive. Normally a strong dual-threat option, Desmond Ridder struggled with Temple's pressure and ran for only nine yards.

"If you can't protect the quarterback, it's going to be a long day," Fickell said.

Temple: Two short fields set up a 10-0 Owls lead, but the offense really struggled to find its footing in the second and third quarters. Temple's defense forced enough pressure to get the ball back in its offense's hands and keep the game alive.

Offensively we started fast, sputtered in the middle, and then when it counted the came up huge," Collins said. "When it mattered most, the guys on this team stepped up and made plays."

Cincinnati kicker Cole Smith converted just one of his four field-goal attempts. The four tries were more than the three he'd attempted all season entering Saturday.

One of Smith's misses, though, was a bit peculiar. On a fourth down with 1:46 remaining in the first half, Temple called timeout to stop the clock. There was also a television timeout.

The Bearcats snapped the ball after the timeout and Smith's kick split the uprights, but the officials ruled the ball had not been marked for play out of the television timeout. Moments later, Smith missed wide right.

"There is no explanation for it," Fickell said.

Cincinnati: at SMU on Saturday

Temple: at UCF on Thursday, November 1.