Rutgers fires coach Ash after 8 wins in 3-plus seasons 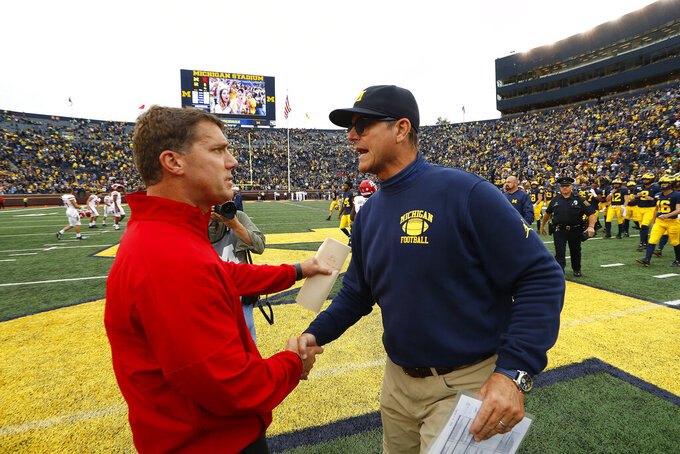 PISCATAWAY, N.J. (AP) — Chris Ash's tenure as Rutgers coach is over after three-plus seasons that resulted in only three Big Ten victories.

Athletic director Pat Hobbs announced Sunday that Ash had been fired four games into his fourth season, with the Scarlet Knights showing little progress. Rutgers (1-3, 0-2 Big Ten) was embarrassed 52-0 by Michigan on Saturday. The Scarlet Knights went 1-11 last season and have not won a Big Ten game since 2017, losing 14 straight to conference foes and 16 in a row to Power Five teams.

"We appreciate Chris's dedicated efforts on behalf of our football program, our department and our University," Hobbs said in a statement released by the school on Sunday afternoon. "This change is especially difficult because of the steadfast commitment that Chris and his family have made to our student-athletes. Progress has been achieved in many areas, but, unfortunately, that progress has not been realized in the field of play. As such, it is in the best interest of the program to make a change."

Hobbs also announced offensive coordinator John McNulty has been fired and tight ends coach Nunzio Campanile will serve as interim head coach for the remainder of the season. Rutgers will host Maryland on Saturday.

A national search for the next coach will begin immediately, Hobbs said. Even before the move to let go Ash, there was speculation that former Rutgers coach Greg Schiano would be a candidate to return to the school.

Schiano was Rutgers coach from 2001-11, leading a massive rebuild that took the program from the bottom of major college football to six bowl appearances in seven seasons. Schiano left to become Tampa Bay Buccaneers coach after the 2011 season, but lasted only two seasons. He spent three seasons as Ohio State defensive coordinator before parting ways with the program after last season. He took a job in February as defensive coordinator with the New England Patriots and friend Bill Belichick, but resigned the post about a month later, saying he wanted to spend more time with family.

Schiano had been all but officially hired by Tennessee after the 2017 regular season, but a fan mutiny led the university to back out of that deal.

Rutgers hired Ash as a first-time head coach in 2016, fresh off a stint at the Ohio State's defensive coordinator under Urban Meyer. He helped the Buckeyes win the 2014 national championship.

Ash took over a program mired in off the field issues, including several arrests and an academic scandal involving former coach Kyle Flood.

As part of his buyout, Rutgers will owe Ash approximately $8.47 million, with part of his $2.3 million salary from this year still to be paid and the $7.5 million he's owed through the 2022 season.

McNulty's departure erases some long-awaited stability at offensive coordinator. The only offensive coordinator to coach for more than one season at Rutgers since he did it during his first stint in Piscataway from 2007-2008, McNulty has another year left on a three-year deal that pays him $625,000 this season. He is owed about $900,000.

Ash and McNulty's buyouts will be paid for by athletic department-generated funds, according to Rutgers.

Campanile is relatively new to college coaching, coming to Rutgers as Ash's running backs coach in February of 2018 after building Bergen Catholic into a New Jersey parochial football power from 2010-2017.