Rutgers looks for first win against Penn State since 1988 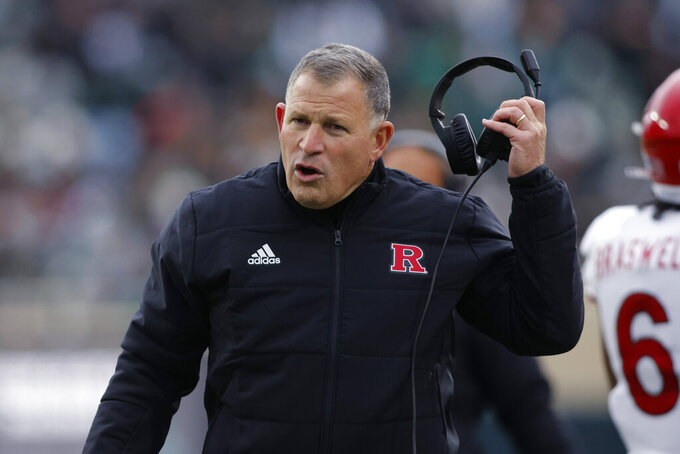 PISCATAWAY, N.J. (AP) — Since joining the Big Ten Conference in 2014, Rutgers has found it just doesn't do too well against some teams.

The obvious is No. 2 Ohio State, who has beaten the Scarlet Knights nine times, including this season's 49-10 tilt.

The other team that has owned Rutgers is No. 11 Penn State.

Penn State's only two losses this season have been to No. 2 Ohio State and No. 3 Michigan.

With two games left in the regular season, they are in line to get another top-notch bowl bid.

“They’re one of the top 15 teams in America,” Rutgers coach Greg Schiano said. “They’re playing at that level now. That’s what I would say the biggest thing is. They’ve gotten better over the course of the season.”

In their history, Penn State is 30-2 against the Scarlet Knights and has won 16 straight. In eight Big Ten meetings, Rutgers has not scored more than 10 points in any game and it's been just single figures in the last seven.

Penn State coach James Franklin doesn't want his players focused on streaks or where they finish or what bowl bid they might get.

“Consistency is also important and we’ve seen programs also have the big wins and then they win, but they lose two or three games that they’re not supposed to,” he said. “What you’re really trying to do is do both, which is challenging.”

Penn State has not shied away from trying to convert fourth downs: The Nittany Lions have been successful on 17 of 25 attempts, the 15th-best rate among FBS teams.

Lately, they’re getting it done with a T-formation that includes both Nick Singleton and Kaytron Allen in the backfield with tight end Brenton Strange.

Singleton took two runs out of this formation for long touchdowns on fourth-and-inches last week.

Rutgers running back Kyle Monangai set a program record for a Big Ten game with 162 yards rushing against Michigan State. He opened the season as a starter but lost the job to Sam Brown. When the freshman was hurt against Indiana, he got the job back.

“We were going to scout another running back and this guy just kept showing up, and I remember coming back and saying, that’s a really good running back there," Franklin said. “And he is playing really well right now. I think kind of their offense right now kind of goes through him.”

While Franklin said he expects Porter back at some point this season, it is unclear whether the team’s shutdown defender will play Saturday.

Johnny Dixon started in Porter’s place alongside Kalen King on the other corner.

The players and their families will be honored in a ceremony 30 minutes before the scheduled kickoff.

Freshman Gavin Wimsatt was named Rutgers' starting quarterback three weeks ago. He is coming off his best game, throwing 20 of 34 for 236 yards and two touchdowns in the loss to Michigan State last weekend.

The offense was 8 for 16 on third down, had seven pass plays of at least 15 yards and no turnovers.

Wimsatt's statistics have improved each week, although he will be facing one of the conference's top defenses this week.

Schiano said Penn State suffocated Maryland last week, limiting the Terps to 134 total yards (60 rushing, 74 passing). It was the fewest it has given up since holding Purdue to 104 yards in 2019. The Nittany Lions had seven sacks.