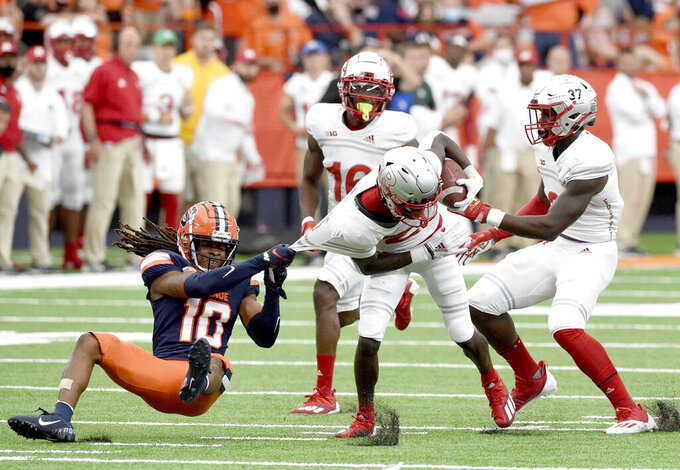 An unsportsmanlike conduct penalty against Syracuse (1-1) coach Dino Babers after he disputed a personal foul call on Orange linebacker Mikel Jones gave Rutgers (2-0) a first down on the Syracuse 11. Kyle Monangai ran it in on the next play to give the Scarlet Knights a 7-0 lead with 6:46 to go in the third quarter.

A fumble by Syracuse quarterback Tommy DeVito was recovered on the Orange 10 and a 27-yard field goal by Rutgers’ Valentino Ambrosio made it 17-7 with 8:23 remaining in the game.

“I didn't see it. I don't know how it happened,” Rutgers coach Greg Schiano said. “In the heat of the battle you get upset when you think you were wronged.”

Noah Vedral was 22 of 28 for Rutgers for 145 yards and a 30-yard touchdown pass to tight end Jovani Haskins. He was sacked four times by a Syracuse defense that held the Scarlet Knights to 198 yards.

“I thought the defense played extremely well,” Babers said. “I think the kicking game, maybe it cost us as much as the offense not scoring enough points. I thought the defense came out in some tough situations with some amazing energy and some fantastic stops. You're supposed to win these types of games unless you turn the ball over more than the other team and you lose the kicking game.”

The Orange turned the ball over three times. Rutgers had no turnovers.

The Scarlet Knights sacked DeVito five times and Garrett Shrader once. DeVito was 15 of 25 for 149 yards and one interception.

Following a scoreless first half, both teams traded punches in the third quarter. After Monangai's score, it took the Orange just 52 seconds to tie on a 24-yard burst up the middle by Sean Tucker. The Scarlet Knights returned the favor when Vedral found Haskins wide open in the middle of the field for a 30-yard score.

Syracuse held Rutgers, which scored 61 points in its season opener against Temple, to just 49 yards and five first downs in the first half. The defense also sacked Vedral three times.

“We knew this was going to be a grimy, tough, gritty game. That's what it was going to be. They have a scheme that's very, very hard to prepare for unless you're an elite group, and we're not there yet, offensively,” Schiano said. “On offense, we have to work to do. We had some field position today that you should capitalize on, and we didn't.”

SU SPECIAL TEAMS NOT SO SPECIAL

Backup punter Colby Barker shanked a punt for 8 yards. The Orange had a punt blocked in the first quarter, muffed a punt that it recovered and missed a 29-yard field-goal attempt.

RUTGERS, ON THE OTHER HAND

Adam Korsak punted six times for a 52.2 yard average and pinned the Orange inside its 20 five times.

IF YOU HAVE TWO QUARTERBACKS, DO YOU HAVE ONE?

Neither DeVito not Shrader distinguished themselves for Syracuse.

Rutgers: The Scarlet Knights struggled but should have things much easier next week.

Syracuse: The Orange defense played Rutgers tough but the offense struggled to protect DeVito, who also was inconsistent throughout.