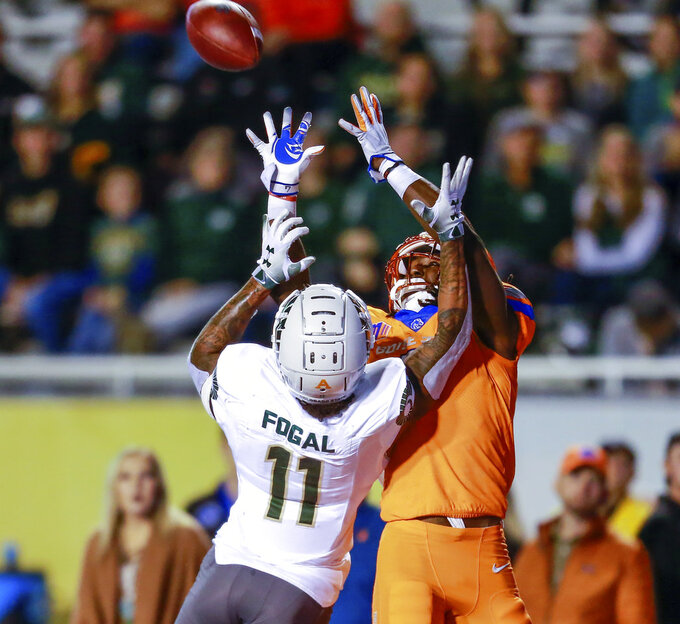 Boise State wide receiver A.J. Richardson (7) reaches for the ball while he battles with Colorado State safety Jordan Fogal (11) in the first half of an NCAA college football game, Friday, Oct. 19, 2018, in Boise, Idaho. Richardson pulled in the catch. (AP Photo/Steve Conner) 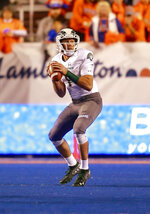 Boise State (5-2, 3-1 Mountain West), which had to rally from a 35-10 halftime deficit last season against the Rams, flipped the script this time in racing out to a 35-7 halftime lead and never looked back.

"I just thought the fast start tonight was the key to our success, and some of the plays we made on special teams . they were outstanding," Boise State coach Bryan Harsin said. "If you lose momentum in a game, you have to find a way to get it back. . But we kept that momentum throughout the game, which was key for us."

Colorado State (3-5, 2-2) was its own worst enemy, turning the ball over three times and giving up a wild punt return for a touchdown. K.J. Carta-Samuels was 19-of-30 passing for 238 yards with two touchdowns and two interceptions.

"Too many things went wrong for us tonight to have a chance to win," Colorado State coach Mike Bobo said. "I didn't think we had to play a perfect game, but we certainly needed to play better than that."

In the first half, the Broncos' offense was so efficient that the only third down it failed to convert occurred when Rypien stumbled over his own feet after taking a snap under center. But that was about the only miscue he had in finishing with the same number of touchdowns as incompletions (22 of 26 passing).

Rypien hit A.J. Richardson twice on scoring strikes of 13 and 35 yards in the first half before finding Sean Modster for a 17-yard touchdown near the end of the second quarter. Modster also scored on a 26-yard reception in the fourth.

Boise State defensive back Avery Williams had an interception along with a 44-yard kickoff return for a touchdown, the Broncos' first since Nov. 23, 2013 against San Diego State.

Colorado State: Suffering a blowout loss wasn't the way the Rams wanted to begin a critical stretch of conference games, especially if they had any plans to play in the Mountain West title game. With two losses in conference action, Colorado State has no margin for error and will need to get some help along the way to get to the championship.

Boise State: The Broncos successfully re-established their dominance at home after struggling in a 19-13 loss to San Diego State two weeks ago. Boise State still controls its own fate and will need to protect its home turf against three good opponents — BYU, Fresno State, and Utah State — to finish the regular season in order to have the opportunity to defend its Mountain West title.

Boise State: The Broncos will play next Saturday at Air Force where they are winless in three previous games.