Saban makes official what "everybody knows," it's Tua's job 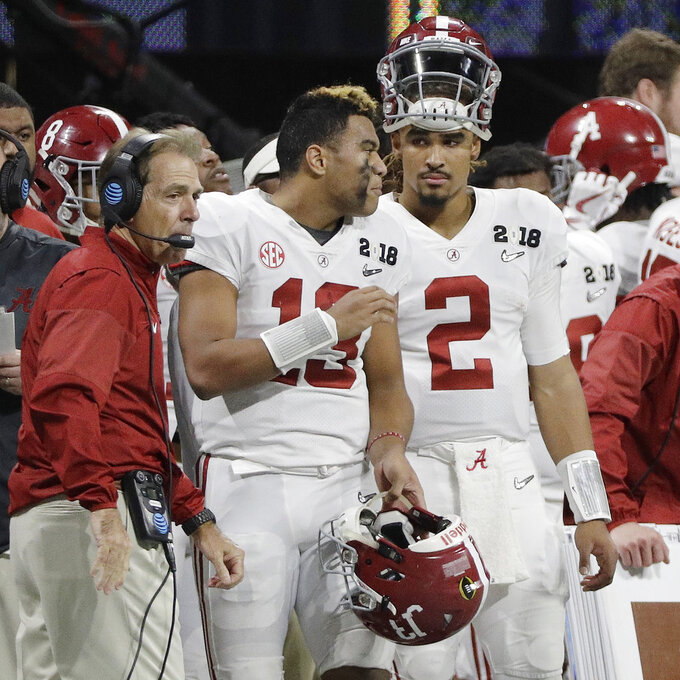 FILE - In this Jan. 8, 2018, file photo, Alabama quarterbacks Jalen Hurts (2) and Tua Tagovailoa (13) and head coach Nick Saban watch from the sideline during the second half of the NCAA college football playoff championship game against Georgia in Atlanta. (AP Photo/David J. Phillip)

TUSCALOOSA, Ala. (AP) — Nick Saban made official what anybody who watched No. 1 Alabama's opener likely assumed: Tua Tagovailoa is the Crimson Tide's starting quarterback.
The top-ranked Tide's coach didn't wait for the question to be asked Monday before saying Tagovailoa will start Saturday against Arkansas State, but even he acknowledged it wasn't much of a secret.
He said two-year starter Jalen Hurts will still play a role.
"I think everybody knows that Tua's going to start this game and we're going to use Jalen's skill-set in the future to help however we feel that he can benefit the team," Saban said. "I just want to be clear with everyone that I have done this in the past where we don't say who the starter's going to be for the first game and we give both quarterbacks an opportunity to play in the game, which is exactly what we did in this game. Not a whole lot different than what we've done in the past."
It was just amplified this time because of the circumstances. Hurts has a 26-2 record as a starter and has led the Tide to a pair of national championship games.
Tagovailoa was the hero of the title game against Georgia in January after entering for the second half, guaranteeing a quarterback battle during the offseason. The sophomore from Hawaii was terrific in his first start in a 51-14 victory over Louisville . He was 12-of-16 passing for 227 yards and two touchdowns while running for a third score.
"We make all of our decisions here based on winning," Saban said. "Whoever we feel will give us the best opportunity to go out there and win, that's who we're going to play. Obviously, it's how you practice, how you prepare. I said it at the beginning, who wins the team.
"In our opinion, the one player did a little better job of that so he got the opportunity to start and we got the opportunity to play both guys and look and see how they performed and we're going to continue to try to help both players improve and get better."
It had become a touchy subject for Saban after repeated questions about the starter leading up to the game. Saban got testy with an ESPN reporter following a postgame question about the decision.
Saban called sideline reporter Maria Taylor and apologized.
Taylor simply asked: "What answers did you have about your quarterbacks after watching them both play tonight?".
Taylor was part of the ESPN crew for Monday night's game between No. 20 Virginia Tech and No. 19 Florida State. She declined to comment when asked about Saban's remarks the past two days.
Saban is taking pains to avoid seeming critical of Hurts .
"If I get asked to vilify a player and make another one a crown prince publicly, I might not respond to that, and I need to learn a better way to respond to that," he said. "And I will in the future. And I pray every Sunday that I never get angry. But it was a time and circumstance thing for me. I was a little upset by the way we finished the game, the penalties we had, the mental errors that we had. So it was totally my responsibility and we apologize for it."
Saban said he hasn't made any decision on working to let Hurts take advantage of the NCAA's new rule allowing players who play in four games or fewer to redshirt. Hurts has two years of eligibility left and played significant time in the opener.
"I don't know how you can prepare when you pick and choose when you're going to play players," Saban said. "I don't know how you can do that. I mean, you have to get somebody ready to play in the game. So if you have any suggestions, I'd be glad to listen to them. But I don't know how you do that. I don't know how a player really can choose when he wants to play and have any respect for his teammates."
___
Associated Press writer Joe Reedy in Tallahassee, Florida, contributed to this story.
___
More AP college football: https://apnews.com/tag/Collegefootball and https://twitter.com/AP_Top25