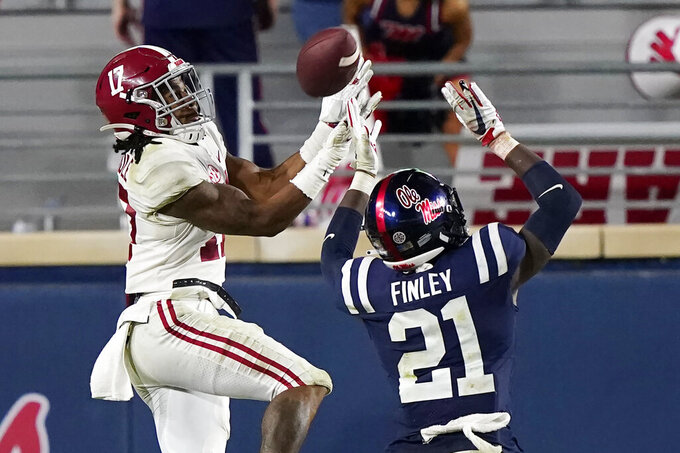 KNOXVILLE, Tenn. (AP) — Alabama coach Nick Saban said junior wide receiver Jaylen Waddle has a high ankle sprain with a fracture and will be out the rest of the season if he needs surgery.

Waddle was hurt when he took the opening kickoff out to the Alabama 15. He was tackled by Kenneth George Jr., and Waddle's right foot got caught between the grass and George's body. Waddle was helped off the field putting no weight on his right foot before being carted to the locker room.

Saban said after a 48-17 win over Tennessee that it's a really sad time for Waddle and his family with Waddle probably needing surgery.

“We’re going to fly him back privately with the doctors and take him back to Birmingham and see what we have to do right away,” Saban said. “If that’s the case, and we’re pretty certain that it is, he would probably be out for the year.”

Waddle has been one of the nation's top punt returners the past two years and has seldom had the ball kicked his way this year.

“I think we responded well on focusing on the most important thing, which is the next play at hand,” Metchie said.

He opened this season with at least 120 yards receiving in each of the first four games and led Alabama with 557 yards on just 25 catches. Waddle was averaging 22.3 yards per catch and had four touchdowns.