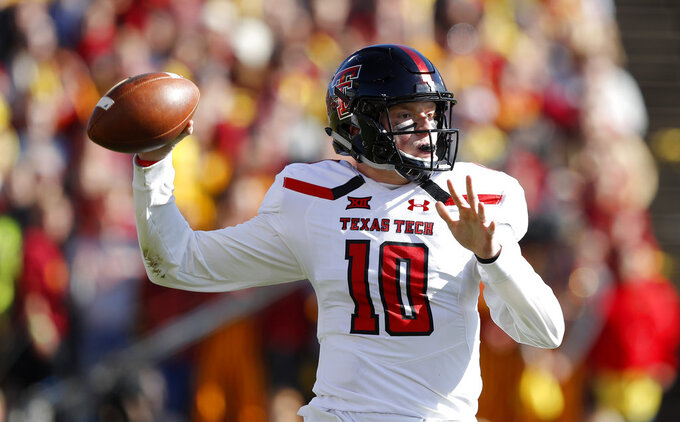 AMES, Iowa (AP) — This used to be the time of the year when Iowa State would start to fade — if it hadn't already.

Coach Matt Campbell and the Cyclones have instead finished their second straight October unbeaten, and they're peaking heading into the sport's most crucial month.

Bowman's two-point blunder was the break the Cyclones (4-3, 3-2 Big 12) needed to clinch their third straight win behind Purdy, their star freshman, after a 1-3 start.

"You work 10 months to get to November to be in it and to play meaningful games," Campbell said. "We've worked really hard to shed that image that you can't do that here."

With the game tied at 31, Bowman fumbled the snap, retrieved the ball and flung it away with his foot in the end zone as a hard-charging JaQuan Bailey approached. Bowman, who was supposed to run a naked bootleg and find an open receiver, failed to get the ball back to the line of scrimmage, putting Iowa State ahead 33-31.

"That's not good enough. It's on me," Texas Tech coach Kliff Kingsbury said. "We've got to get better quick."

Butler, who had four catches for 148 yards, then corralled a beautiful pass from an inconsistent Purdy to put a weird and wild game out of reach.

Purdy threw for 250 yards and a pair of touchdowns and David Montgomery added 125 yards rushing.

Bowman had 323 yards passing for Texas Tech (5-3, 3-2), but he also had three picks. Iowa State linebacker Marcel Spears had two of those interceptions, and he brought one back for a touchdown.

"We're grinding our way through it, and your back is against the wall when you start 1-3," Campbell said. "Who are we? What are we about?"

Iowa State: At times, the Cyclones looked more like that team that started 1-3 than the one on a winning streak. But Iowa State's defense made a number of big plays, none bigger than its third safety in as many weeks. The Cyclones could be favored in four of their final five games — and the second spot in the Big 12 title game remains an unlikely but somehow realistic goal.

Texas Tech: The Red Raiders blew a massive opportunity to take charge in the Big 12 standings with home games against Oklahoma and Texas. Tech wasted an early 10-0 lead, committed 10 penalties and rushed for just 30 yards. The Red Raiders have allowed a staggering 106 points in their last two trips to Ames. "We didn't finish. We've been preaching on finish throughout the summer, but we came up short. It was really tough," linebacker Riko Jeffers said.

Purdy's emergence might have come with a cost. Campbell said after the game that Zeb Noland, a sophomore whose job Purdy took in a 48-42 win at Oklahoma State, took a personal leave of absence this week. "I don't know where that is right now. But he did nothing wrong," Campbell said, noting that he's hoping to have something more definitive next week.

The Red Raiders defense, which has been much improved this season, also made its fair share of plays. Texas Tech tied the game at 31 with 12:50 to go when Jeffers stripped Purdy in the end zone and Dakota Allen recovered the fumble for a touchdown. Tech held Purdy to his lowest yardage total since taking over three games ago, and Montgomery needed 33 carries to reach those 125 yards.

Antoine Wesley had eight catches for 119 yards, including a gorgeous 31-yard TD grab to tie the game at 24-all after Iowa State had scored 10 points in the first four minutes of the second half. ...Tech opened the scoring by blocking a punt that Thomas Leggett fell on in the end zone. ...Iowa State was 7 of 16 on third downs. The Red Raiders entered play ranked second in the Big 12 in third down defense.

"At halftime he told us that we had to go out and play the way that we know how to play. We're either going to be pretenders or contenders, and that's all he had to say. We're not pretenders, so it had to be the other one. So we had to boss our stuff up," Spears said about Campbell's halftime speech.