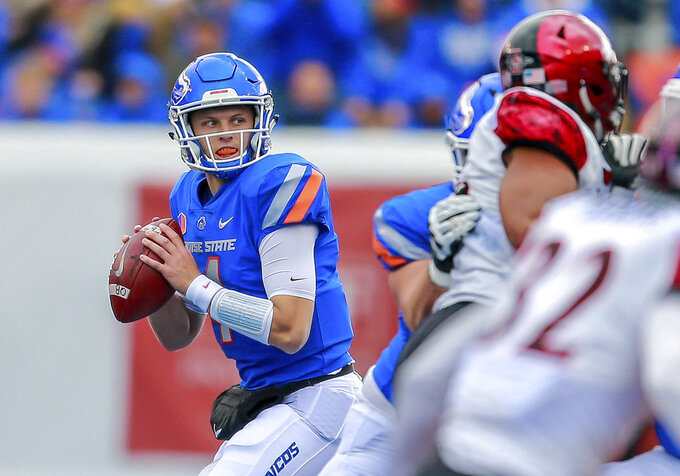 BOISE, Idaho (AP) — In becoming the first visiting coach since 2000 to beat Boise State twice on the school's famed blue turf with a 19-13 upset on Saturday afternoon, San Diego State coach Rocky Long shrugged off the distinction. He seemed more concerned with trying to keep his young team focused and harnessing all the talent.

"We had 19 freshmen and redshirt freshmen to make the trip," Long said. "And half of them played . and sometimes they do unusual things_and it's not always what they're coached to do."

In the first half, one of his freshmen muffed a punt that Boise State recovered at the San Diego State 4-yard line to set up a touchdown.

But with the Aztecs clinging to a tenuous 13-7 lead in the fourth quarter, Jordan Byrd, another one of Long's freshman, ripped off a 72-yard touchdown run to all but seal the victory.

"We all know (Byrd's) fast," Long said. "In practice when he breaks loose, no one comes close to catching him. We just need to get him out in the open to prove he's fast. And he proved he was fast today."

Playing that many freshmen isn't necessarily Long's preference, but injuries to key veteran leaders like senior quarterback Christian Chapman and leading running back Juwan Washington, Long hasn't had a choice.

However, one of Long's seniors, linebacker Ronley Lakalaka, also provided a key play on defense, intercepting a deflected pass in Boise State territory and returning it to the 17. The ensuing drive led to a San Diego State touchdown and put the Aztecs ahead 13-7, a lead they never relinquished.

As much as the momentum swung on a pendulum of freshmen play, the Aztecs (4-1, 1-0 Mountain West) leaned heavily on their defense. Winners of two of their last three games in Boise, San Diego State needed only 267 yards of offense to pull off the victory.

Boise State (3-2, 1-1) struggled to generate any offense early, finishing the first quarter with more points (7) than yards (2). The Broncos scored on a 1-yard run by Alexander Mattison after Riley Whimpey recovered a muffed punt at the San Diego State 4.

"There was no rhythm, no momentum_and that falls back on us as coaches," Boise State coach Bryan Harsin said. "You have to have answers for that and figure out a way to create momentum. We just didn't sustain the drives and that momentum that we needed to keep it going."

Entering the game without having thrown an interception this season, Boise State quarterback Brett Rypien threw two in the first half. He finished with 21-of-41 passing for 170 yards. He was also sacked four times.

However, it was an interception thrown by Broncos' backup quarterback Chase Cord that ended up giving San Diego State control of the game.

Lakalaka's made a one-handed grab off a deflected pass from Cord and returned the ball to the Boise State 17, setting up San Diego State's lone first-half touchdown to take a 13-7 lead.

While the Broncos moved the ball better in the second half, they never could find a rhythm on offense until the outcome was all but decided.

Then the Aztecs defense made the lead stand up, limiting the Broncos to a total of 229 yards, 79 of which came with less than seven minutes remaining in the game.

San Diego State has already cobbled together a pair of impressive victories against Pac 12 foe Arizona State and now Boise State, the defending Mountain West conference champ. And in doing so, the Aztecs have thrust themselves into the conversation about which team will emerge from the Group of 5 to play in a New Year's Six bowl game.

But Long, who has won at least 10 games in each of the last three seasons, wasn't interested in discussing the possibility of where this team may wind up after the regular season.

"It's way too early to talk about that," Long said. "We have to play next Friday against a good Air Force team. It's hard enough to play against a triple option team, but to have to do it on a short week ... that's tough."

San Diego State: The Aztecs might find their way into the rankings this week and have suddenly emerged as a threat to reach a New Year's Six bowl game. Having survived a challenging stretch to open the season including a victory over Arizona State, San Diego State should stay in contention during the softer portion of its schedule before getting healthy again.

Chapman and Washington are expected to return from injuries suffered earlier this year in time for the tougher conference games to wrap up the season.

San Diego State: The Aztecs put themselves in a prime position to host the Mountain West title game if they emerge from the West division with the same record or better as Boise State. However, San Diego State will still have to face a tough Fresno State team in November, but should have most of their injured starters back by then.

Boise State: The Broncos' dreams of crashing the New Year's Six bowl party as the representative of the Group of 5 evaporated with its second loss this season. Boise State will have to regroup but can still reach the Mountain West championship game if it can avoid any more missteps.

San Diego State: The Aztecs will have a quick turnaround, returning home on Friday to host Air Force in another conference matchup.

Boise State: The Broncos will travel to Nevada for a pivotal Mountain West divisional clash.