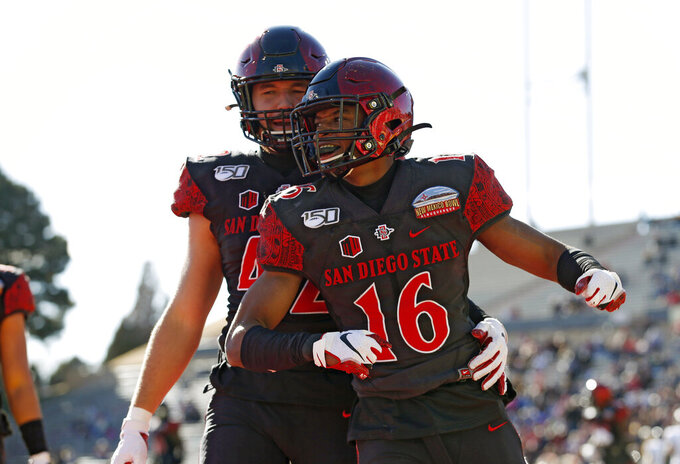 San Diego State cornerback Luq Barcoo (16) celebrates with linebacker Troy Cassidy (42) after an interception in the end zone during the first half of the New Mexico Bowl NCAA college football game against Central Michigan on Saturday, Dec. 21, 2019 in Albuquerque, N.M. (AP Photo/Andres Leighton) 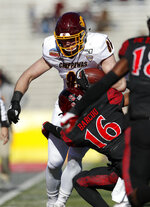 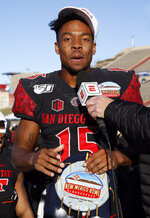 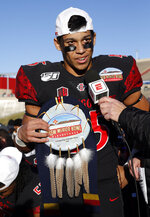 ALBUQUERQUE, N.M. (AP) — Coming into the New Mexico Bowl, San Diego State's defense was the focus. The Aztecs ranked second in the nation in rushing defense and second in rushing yards allowed per carry. But San Diego State's offense, with only an average of 19 points-per game, ranked among the nation's worst. Something had to give against Central Michigan and its strong defense.

So the Aztecs offense stepped it up Saturday

“We don't listen to the stuff outside the locker room,” Matthews said. “It all came together.”

Jordan Byrd ran for a career-high 139 yards and a touchdown to help the Aztecs (10-3) cap their 10th straight bowl appearance with a victory. San Diego State opened 7-1 record, then dropped two of its last three conference games to fall out of contention for a Mountain West title game berth.

San Diego State coach Rocky Long said he and his coaching staff did nothing differently to prepare the offense or get them motivated.

“We just played a whole lot better today,” Long said with a shrug.

San Diego State prevented Central Michigan (8-6) from sustaining consistent, with quarterback Quinten Dormady under pressure and forced to throw into tight coverage. He passed for 164 and threw three interception.

Central Michigan's Jonathan Ward, who came into the game with 1,082 yards and 15 touchdowns, was held to 7 rushing yards and 26 yards receiving.

Kobe Lewis ran for 97 rushing yards, with a 66-yard rushing touchdown in the third quarter. Despite the loss, Lewis credited Chippewas coach Jim McElwain for changing the culture of the program that went from 1-11 to 8-6 in one year.

“I didn't care what the score was,” said Lewis. “I wanted to play hard and finish hard.”

McElwain said he still felt Central Michigan had a successful season even through the team finished with losses in the Mid-American Conference Championship and New Mexico Bowl.

“You learn from your failures,” he said.

McElwain said he was returning next season as head coach despite talk linking him to over jobs.

The victory served as homecoming for Long. He last won the New Mexico Bowl in 2007 as New Mexico's coach. Long is 4-9 in bowl games and used to look at the field from his office. “It was real special to me because I have ties to this place,” Long said.

San Diego State: The Aztec came into the postseason with its highly touted defense but concerns about an offense that took a lot of time off the clock to score. San Diego State attacked Central Michigan in the air and on the ground in a balanced attack to end with its 11th double-digit win season in program history.

Central Michigan: To overcome San Diego State's nationally ranked rushing defense, the Chippewas needed big games from Dormady and Ward. However, both were held by the defense line. Central Michigan had to improvise and rely on Lewis, but it was not enough to overcome the pressure.

San Diego State: Cornerback Luq Barcoo is graduating after a strong season that included nine interceptions. That's a significant blow for a defense that was ranked among the top 20 in various categories nationally. Yet, the defensive line and secondary remain young, and most starters are scheduled to return. The Aztecs open next season Sept. 5 at home against Sacramento State

Central Michigan: The Chippewas will look to building on their dramatic turnaround from a year ago when they won only one game to an 8-6 record. However, Central Michigan will need it to reshape its offense with the loss of quarterback Quinten Dormady and running back Jonathan Ward, both graduating seniors. The Chippewas open next season Sept. 5 at home against San Jose State.