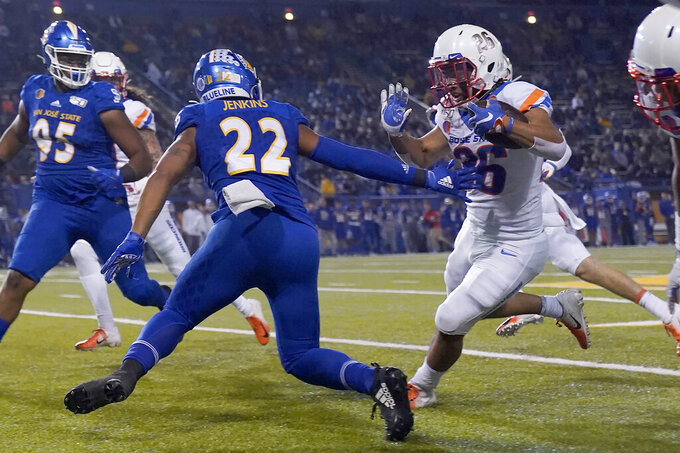 FILE - In this Saturday, Nov. 2, 2019 file photo, Boise State's Avery Williams (26) races past San Jose State's Tre Jenkins (22) on his punt return for a touchdown during the first half of an NCAA college football game, in San Jose, Calif. No. 25 San Jose State will face perennial conference powerhouse Boise State in the Mountain West championship on Saturday, Dec. 19, 2020 in Las Vegas. The game is usually played on the higher seed’s home field but this year it will be held at Sam Boyd Stadium. (AP Photo/Tony Avelar, File)

LAS VEGAS (AP) — After winning just a handful of games over his first three seasons, San Jose State coach Brent Brennan knew during spring ball that this year’s Spartans would be special.

Brennan was watching his team scrimmage one day before all practice was shut down due to COVID-19, and it clicked.

“The speed we were playing with on both sides of the ball, the physicality, the violence, the execution,” Brennan said. “The whole thing looked different; it was surreal. I almost got a little teary.”

The game is usually held on the higher seed’s home field but it is being played at Sam Boyd Stadium after it became the temporary home for the Spartans. The team relocated to Nevada because of virus-related restrictions in its home county in Northern California.

The teams were scheduled to meet during the regular season on Nov. 28, but that game was canceled due to COVID-19 issues and declared a no contest.

“It was unfortunate,” Brennan said. “I called a team meeting, told them what had happened and obviously guys were disappointed. Big opponent, national recognition on national TV, and guys were excited for that opportunity to compete.”

Now his upstart Spartans finally get their shot at a Broncos team that will be playing in its fourth straight Mountain West championship.

“I don’t see a lot of flaws in their game,” Boise State coach Bryan Harsin said. “I think they’ve played well in all three phases.”

San Jose State’s offense is averaging 30.3 points and 433.7 yards per game, while its defense allows 17.5 points per contest, good enough to rank 13th nationally. The Spartans also rank fifth in the nation in averaging 30.1 yards per kickoff return.

HOME AWAY FROM HOME

The Broncos have won seven of their last eight at Sam Boyd Stadium. San Jose has won four of its last six at the former home of the UNLV Rebels, including a 30-20 win over Nevada this season.

San Jose State quarterback Nick Starkel spent the first three years of college in the SEC, at Texas A&M and Arkansas. He didn’t arrive in San Jose until late January and barely had a chance to get integrated with the Spartans since spring ball was halted after just a handful of practices. Starkel used phones and Zoom sessions to build chemistry, which seemed to work. He ranks 22nd nationally with a 66.2% completion percentage.

“When I first got here, I saw a team that was mature in their knowledge of the game,” Starkel said this week. “A team that knew not just the routes that they were running or the protections or run plays we were calling, but they knew why they were doing those things.”

If Starkel isn’t enough of a problem, Boise State’s defense has allowed 183.7 yards rushing per game and has the tough chore of containing running back Tyler Nevens, who averages 8.9 yards per carry. Over his past two games, Nevens has rushed for 336 yards on just 28 carries, including a 69-yard run against Nevada last week.

Boise State’s Avery Williams won his second straight Special Teams Player of the Year award Tuesday after ranking third in the league and ninth nationally with a 29.6-yard kickoff return average. Williams, the nation’s only player to rank in the top 10 in both punt returns and kickoff returns, will be looked upon to get the Broncos in good field position.

With a taste of success last season, yet still falling short of becoming bowl eligible, the Spartans adopted the mantra “climbing the mountain” shortly after spring practice was shut down. The players took it a step further by texting videos of themselves in group chats running to the tops of mountains and looking over the Bay Area.

“Guys were just finding ways to get out and demonstrate to the team that they were willing to climb the mountain,” Brennan said. “That’s kind of stayed with us.”