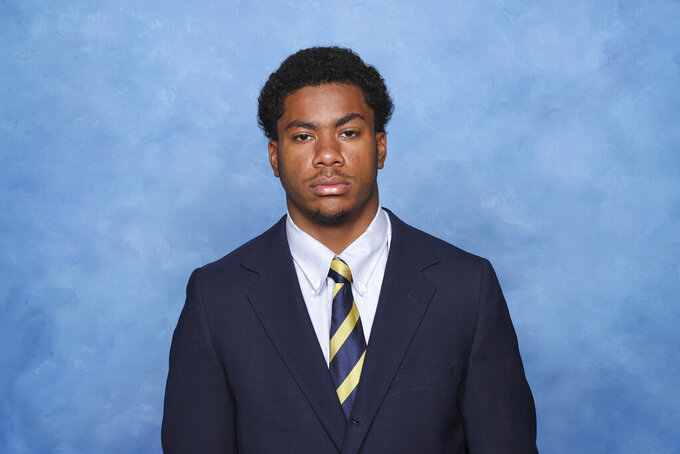 SAN JOSE, Calif. (AP) — San Jose State has postponed its football game this weekend after a freshman running back was killed Friday when he was hit by a school bus while riding a scooter near campus.

Athletic director Jeff Konya said Saturday's game against New Mexico State will be played later this season after the Spartans mourn the death of Camdan McWright.

“We are all saddened by the tragic loss of Camdan McWright,” Konya said. "The San Jose State community is a very close one, and the campus is devastated. We lost a very bright, talented young man too soon. Our heartfelt thoughts and prayers go out to the McWright family.”

The San Jose Unified School District bus had the green light when the 18-year-old McWright entered the crosswalk directly in the vehicle’s path, the California Highway Patrol said. McWright died at the scene, about two blocks from the university, authorities said.

No one was injured on the bus and the 14 students, ages 14 to 17, were escorted onto a second bus that drove them away from the scene, the highway patrol said. It said the 36-year-old bus driver pulled over and remained at the scene. Investigators don’t believe alcohol or drugs were a factor in the crash.

McWright, a running back, was previously a football star for St. Genevieve High School in Los Angeles, near his hometown of Sylmar. He had played in one game this season.

“We lost an amazing young man tragically this morning,” coach Brent Brennan said in a statement. “Camdan had a bright future ahead of him and everyone in this community that had the opportunity to spend time with him knew that. We are still trying to deal with the news of this tragedy, and appreciate everyone’s support during these difficult times.”

University officials are cooperating with the highway patrol’s investigation and will make counselors available to students and staff, the university said.

“We grieve for Camdan, his family, friends, teammates, and the Spartan family,” university President Steve Perez said. “We grieve together and will provide all of the support that Camdan’s family, our students and our football program require to help move through this tragic time.”