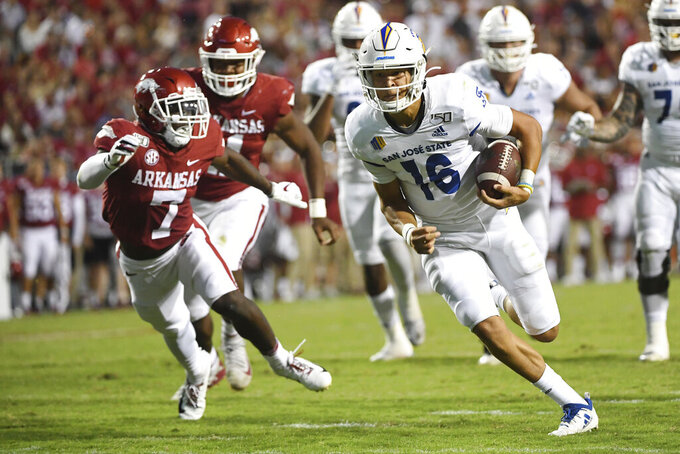 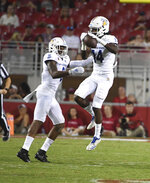 FAYETTEVILLE, Ark. (AP) — Coming into Saturday night, the last time San Jose State beat a power conference opponent was in 2006 when the Spartans beat Stanford — a team that finished 1-11 — by a single point. Cardinal coach Walt Harris, who was in his second season, was fired at its conclusion.

Arkansas coach Chad Morris is in his second season, coming off a 2-10 year and Saturday's game between his Razorbacks and San Jose State was only briefly that close.

"It's been two really, really hard years," Brennan said. "To see (us) rise to the occasion, to stay together, to keep believing. We didn't fold. We actually bowed up. We made it hard on them."

Packer's score was the game-winner, but San Jose State's (2-1) five interceptions of Arkansas quarterback Nick Starkel were the true catalyst. Two of Starkel's picks came after he and the Arkansas offense had marched into the red zone. But an overthrow was picked off by Jay Lenard at the 13 on the first drive after halftime and an errant pass was nabbed by Nehemi Shelton at the 1 on the next series.

"This performance is completely unacceptable," Morris said. "You get what you deserve in life. We didn't deserve to win this football game."

San Jose State scored on each its final three possessions of the first half, breaking a 7-all tie behind quarterback Josh Love's 18-for-26, 240-yard passing performance to that point. He would finish with a career-high 32 completions on 49 attempts for 402 yards and two touchdowns, both of which seemed unlikely if not for Arkansas' harried defensive play.

An improbable third-down conversion propelled San Jose State to its third first-half touchdown. A 5-yard pass over the middle on third-and-10 should have ended the Spartans' drive. But instead of turning up field and trying to force his way through, Tre Walker — who finished with 161 yards on 12 catches — danced, waited on blockers and turned the opposite way, finding the edge, picking up 20 yards and drawing a smattering of boos from the Arkansas crowd. Those calls of disapproval disappeared four plays later, replaced by silence brought on by incredulity after Love threw a 26-yard touchdown pass to Isaiah Holiness to make the score 24-7.

It came after some on the Arkansas defense boasted during the week about shutting down the San Jose State defense. Spartans offensive lineman Troy Kowalski, who in his fifth season has never seen a winning record, cried when the final horn sounded.

"Being here, this my fifth year, being through what I've been through, coming to an SEC school, no one believes in you," Kowalski said. "One of their linebackers says, 'You're going to run for zero yards against us.'

Starkel was making just his second start of the season. He failed to win the job out of fall camp, but replaced an ineffective Ben Hicks in the second half of Arkansas' Week 2 loss to Ole Miss and then led the Razorbacks to a 21-point win over Colorado State last week in throwing for 305 yards. He never looked like the same quarterback against San Jose State.

Besides his five interceptions, three more of his passes bounced in and out of the hands of Spartans defenders. He didn't receive much help from the Arkansas rushing attack, either, as the Razorbacks ran for just 131 yards on 32 carries and didn't score. Starkel finished 28 for 50 for 356 yards, the most by an Arkansas quarterback since October 2016 against Alabama.

"I feel like I let everybody down," Starkel said. "I let my teammates down, my brothers, my family, these coaches who work so hard to prepare us, get us in the right calls. I just let them down."

The Texas A&M transfer did lead Arkansas to a 24-all tie after trailing by 14 in the fourth-quarter. He threw two touchdown passes in the final 15 minutes, including the tying score on an 8-yard pass to Trey Knox with 2:56 left. Love and San Jose State responded with a 5-play, 75-yard series capped by Packer's touchdown. Starkel then threw his final interception on the next play, a last-ditch deep ball.

The boos grew louder again as Arkansas walked off the field after the game. Morris, despite the clear rebuild he had to begin upon his December 2017 arrival, knows the pressure is on after a poor first 16 games under his watch.

"Outplayed us, outcoached us, and I was very disappointed in the effort we got tonight," he said. "For three quarters, they were the SEC football team."

San Jose State: A 2-1 start is the Spartans' best since 2015, the last time they made a postseason bowl.

Arkansas: The Razorbacks are searching for answers as they prepare for the bulk of SEC play. Arkansas hasn't won consecutive games since beating Ole Miss and Coastal Carolina, each by a single point, in then-coach Bret Bielema's final season in 2017.

TURBULENCE IN THE AIR

Arkansas' five interceptions thrown are tied for the second most in a game in school history. The last time a Razorbacks quarterback threw five picks was in the 1991 Independence Bowl when Arkansas, then in the Southwest Conference, lost to Georgia, 24-15

San Jose State had never beaten an SEC opponent until Saturday. It was just the Spartans' fourth win over a power conference team this century. The Spartans beat Stanford in 2000 and 2006 and beat Illinois in 2002.

"Last drive, everybody on the sidelines is coming up to you and saying they believe in you. That's been the big word this week, believing in yourself," Love said.

Arkansas will look to snap a seven-game losing streak to SEC foe Texas A&M when the two meet at AT&T Stadium in Arlington, Texas, next Saturday.