Sanford, Colorado close out year on cusp of coaching change 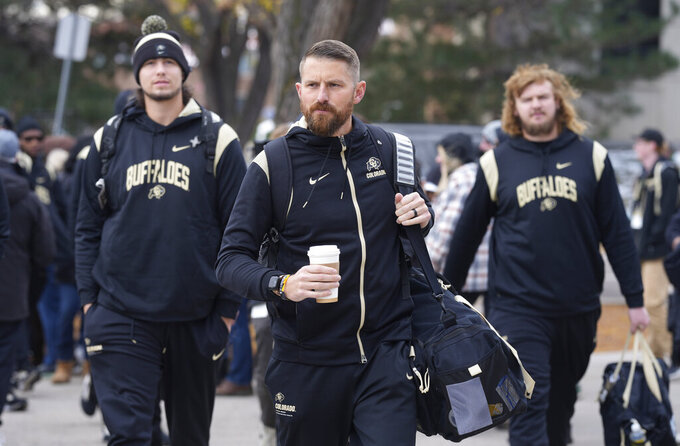 That had the team hooting and hollering with every goal and save. Anything to keep the mood light and upbeat in what's been a grinding season.

For 21 or so Buffaloes players, this Saturday against No. 14 Utah will mark their final occasion to run onto Folsom Field behind their live buffalo mascot Ralphie.

This very well could be Sanford’s last go-around at Colorado, too.

No matter what transpires, Sanford hopes in the short time since he’s moved from offensive coordinator to stepping in for dismissed head coach Karl Dorrell in October that he’s left a little bit of mark. He has gone 1-5 amid a coaching search that may soon bring a new coach to town.

“We did everything we could to push this program in the right direction,” said Sanford, who has been with numerous programs across the nation, including a stint as head coach at Western Kentucky. “But more importantly than that, we cared for these players.

"That’s the legacy that I hope I leave.”

With rumors swirling about which coach might arrive in Boulder next — Deion Sanders' and Bronco Mendenhall's names have surfaced quite a bit — Sanford has tried to keep the Buffaloes (1-10, 1-7 Pac-12) focused on ending a five-game losing streak to the Utes (8-3, 6-2, No. 14 CFP).

And have some fun along the way.

Anything to avoid “sheer drudgery,” a term that stuck with Sanford years ago after listening to a fellow coach use it at a convention.

“That really hit home for me because I’ve been a part of programs that we’re winning a ton of games, and it was sheer drudgery in the building,” Sanford explained. “It was awful — for everyone, coaches, players. Everyone’s sitting here like, ‘Well, that would be nice, to have sheer drudgery be 11-1.’ It is good, because people keep their jobs. Players get the NIL (name, image, likeness) deals.

“But those programs break eventually. Those cultures break. For me, it’s been, ‘What can we do to make this an enjoyable week with each other, for each other?’”

Hence, the penalty-kick competition — a nod to the World Cup going on in Qatar. The goal-scoring created quite the lighthearted atmosphere, too.

“Of course, you could sit here and be like: ‘Hey, this team’s 1-10. Why the heck should that be fun? They should be running wind sprints,'" Sanford said. "Listen, us running wind sprints isn’t going to help us win games. I’ve lived that. I’ve seen it all. What we want to do is to make these last days together the freaking most enjoyable days we can to give ourselves the most joy we can Saturday.”

An upset of Utah could send them into the offseason on a positive note. The Buffaloes are a 29 1/2-point underdog, according to FanDuel Sportsbook.

Through it all — including six losses by 30 or more points — they've stuck together.

"That’s a testament to how close we are as a team, the adversity that we have fought through. That's one thing I've always said is nothing brings you close like being miserable together,” senior tight end and captain Brady Russell said. “We've just become such a close, tight-knit group. ... I’m going to miss all my guys.”

Sanford was brought in last December to try to revamp a sputtering offense. It hasn’t gone according to plan, with the Buffaloes' offense going 25 straight games without gaining 400 or more total yards, according to Pac-12 research. They’ve been outscored by a 158-34 margin over their last three games.

With Utah, Colorado will be playing its fourth straight contest against a ranked team.

"It’s been a tough stretch,” Sanford said. "We’re going to do everything we can to make sure we have the best that we can out there.”