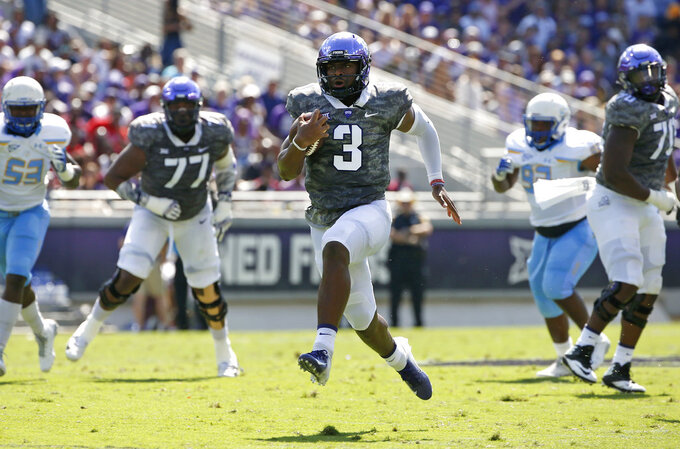 TCU quarterback Shawn Robinson (3) takes off on a 36-yard touchdown run against Southern University during the first half of an NCAA college football game, Saturday, Sept. 1, 2018, in Fort Worth, Texas. (AP Photo/Ron Jenkins)

STARS
—Shawn Robinson, TCU, accounted for five TDs in one half as the No. 16 Horned Frogs opened the season with a 55-7 over Southern University.
—Justin Herbert, Oregon, accounted for 322 yards and six TDs to lead the No. 24 Ducks to a 58-24 victory over Bowling Green.
—Feleipe Franks, Florida, threw five TD passes in the first half and the Gators got the Dan Mullen era off to rousing start with a 53-6 victory against overmatched Charleston Southern.
—Dwayne Haskins Jr., Ohio State, threw for 313 yards and five TDs and the No. 5 Buckeyes routed Oregon State 77-31.
—Will Grier, West Virginia, threw for 429 yards and five TDs as the No. 17 Mountaineers defeated Tennessee 40-14.
—Tyler Horton, Boise State, tied the FBS record by returning two fumbles for TDs in the No. 22 Broncos' 56-20 rout of Troy.
—Mason Fine, North Texas, threw for 444 yards and three TDs in a 46-23 win over SMU.
—Michael Warren II, Cincinnati, rushed for 141 yards and three TDs, and the Bearcats spoiled Chip Kelly's coaching debut at UCLA by throttling the Bruins' offense in a 26-17 victory.
—Keytaon Thompson, Mississippi, threw for 364 yards and five TDs as the 18th-ranked Bulldogs cruised to a 63-6 victory over Stephen F. Austin.
—Jakobi Meyers, North Carolina State, had 14 catches for 161 yards to help the Wolfpack beat James Madison 24-13.
—Anthony Brown, Boston College, threw for 279 yards and four TDs in one half of a 55-21 victory over in-state rival Massachusetts.
—Scottie Phillips, Ole Miss, ran for a career-high 204 yards and two scores in a 47-27 win over Texas Tech.
—Tyree Jackson, Buffalo, threw for six TDs as the Bulls beat Delaware State 48-10.
—Gage Gubrud, Eastern Washington, threw for 337 yards and five TDs in a 58-13 win over Central Washington.
—Calvin Turner Jr., Jacksonville, rushed for 202 yards and three TDs in a 63-14 victory over Division II St. Augustine's.
___
TIGERS TOPPLE HUSKIES
The Auburn Tigers had some bad memories from their last two trips to Atlanta.
They headed home from this one feeling a whole lot better.
With a performance that didn't earn a bunch of style points but will look awfully good on the resume, No. 9 Auburn rallied for a 21-16 victory over No. 6 Washington when Jatarvious Whitlow ran 10 yards for a touchdown with 6:15 remaining.
The Auburn defense came through at the end, preserving the win with a fierce pass rush against Jake Browning.
___
TERPS HONOR MCNAIR
Maryland emerged from a trying offseason with an emotionally charged 34-29 upset of No. 23 Texas, shaking off a lengthy weather delay to provide Matt Canada a satisfying victory in his debut at the Terrapins' interim coach.
After blowing a 24-7 lead, Maryland forced three turnovers in the final 6:09 and scored the game's final 10 points to stun the Longhorns in the opener for the second year in a row.
As remarkable as last season's 51-41 win at Texas was, this victory was far more notable because of what they endured this summer.
Maryland has dedicated its season to offensive lineman Jordan McNair, who collapsed on the practice field on May 29 and died two weeks later of heatstroke.
The Terrapins paid tribute to McNair by lining up with 10 players on their first offensive play. Maryland waited for a delay of game to be called, and Texas declined the penalty in a show of sportsmanship.
___
___
IRISH KNOCK OFF WOLVERINES
The Michigan-Notre Dame series returned after a three-year hiatus and the 12th-ranked Fighting Irish became the latest rival to get the best of Jim Harbaugh's Wolverines.
Brandon Wimbush connected on a long touchdown pass to help Notre Dame jump out to a big first-half lead, Te'von Coney and the defense made it stand with a late takeaway, and the Fighting Irish beat No. 14 Michigan 24-17.
A green-out crowd welcomed the Wolverines back to Notre Dame Stadium and the Fighting Irish scored on their first two drives against a defense loaded with future NFL draft picks. Chris Finke hauled in a deep throw from Wimbush that went through a defender's hands in traffic for a 43-yard score to put Notre Dame up 14-0 midway through the first half.
___
NUMBERS
5_Field goals by USC's Chase McGrath, tying the school record.
17_Tackles for loss by Mississippi in its 63-6 victory over Stephen F. Austin.
144_Career victories for Kirk Ferentz at Iowa, breaking mentor Hayden Fry's school record.
___
DANIELS' DEBUT
Southern California head coach Clay Helton walked up to quarterback JT Daniels, looking into his eyes for confirmation the second freshman to start a season opener in the program's storied history was not overwhelmed by the moment.
Daniels was ready, throwing for 282 yards with a 43-yard touchdown pass to Amon-Ra St. Brown to help the No. 15 Trojans overcome a sluggish performance and defeat UNLV 43-21.
Outside of an early gaffe where Daniels turned the wrong way trying to hand the ball off to running back Stephen Carr, forcing the 2017 Gatorade national player of the year to scramble for a 5-yard gain, there were no apparent nerves from the 18-year-old.
___
More AP college football: https://apnews.com/tag/Collegefootball and https://twitter.com/AP_Top25