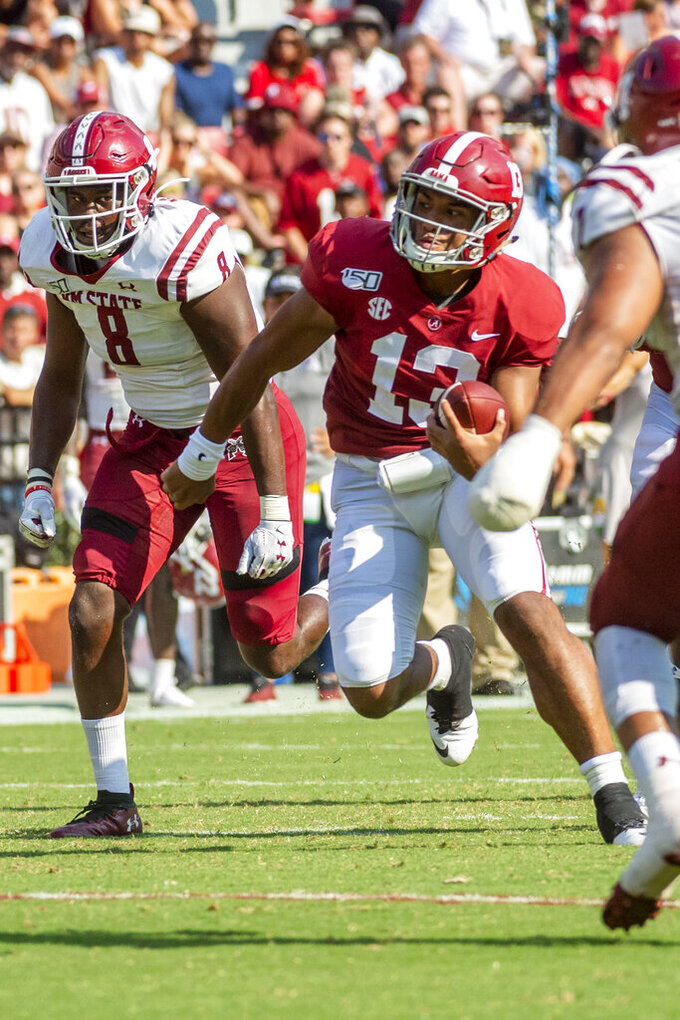 Alabama quarterback Tua Tagovailoa (13) takes off for a running touchdown during the first half of an NCAA college football game against New Mexico State, Saturday, Sept. 7, 2019, in Tuscaloosa, Ala. (AP Photo/Vasha Hunt)

—Elijah Sindelar, Purdue, passed for 509 yards and accounted for six TDs in a 42-24 victory over Vanderbilt.

—Tua Tagovailoa, Alabama, passed for three TDs and ran 25 yards for a fourth in the first half of the No. 2 Crimson Tide's 62-10 victory over New Mexico State.

—Jonathan Taylor, Wisconsin, rushed for three TDs and caught another as the No. 17 Badgers cruised past Central Michigan 61-0.

—Drew Plitt, Ball State, passed for 439 yards and a school-record-tying six TDs in a 57-29 victory over Fordham.

—Quentin Harris, Duke, passed for a career-high 345 yards and four TDs to lead the Blue Devils past North Carolina A&T 45-13.

—Julius Chestnut, Sacred Heart, caught two scoring passes and rushed for 162 yards and another score in a 30-10 win over Bucknell.

Colorado hadn't touched Nebraska quarterback Adrian Martinez, whose jersey was clean and whose passing was perfect, and the Buffaloes had managed just 84 yards of offense and none on the ground.

In a scintillating comeback, the Buffaloes overcame a 17-0 halftime deficit in Tucker's first home game and sent fans streaming onto the field in celebration.

It was Buffaloes' second straight win over their old Big 12 rival. Colorado rallied to win in the closing minutes last year in Lincoln.

Michigan is off to a wobbly start this season and Army almost took advantage.

Jake Moody made a 43-yard field goal and the seventh-ranked Wolverines forced and recovered a fumble to hold on for a 24-21 double-overtime win over the Black Knights on Saturday.

The Wolverines didn't lead until the second extra period and would have lost at the end of regulation to the Black Knights (1-1) if Cole Talley made a 50-yard kick that was just short and to the right.

It marked the second straight year the U.S. Military Academy nearly beat a Top 10 team for the first time in more than a half century. The Black Knights pushed No. 5 Oklahoma into overtime on the road last year before losing 28-21.

23_Games needed by San Diego State to beat UCLA for the first time in a series dating to 1922.

63_Points by Maryland in its win over No. 21 Syracuse, most in school history against a ranked opponent.