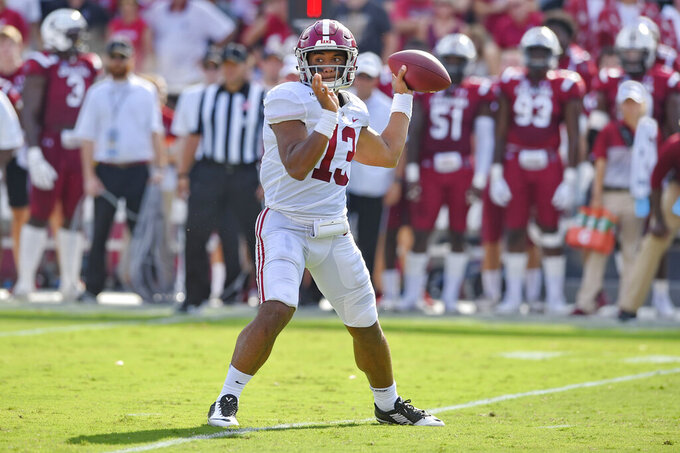 Alabama's during the first half of an NCAA college football game against South Carolina Saturday, Sept. 14, 2019, in Columbia, S.C. (AP Photo/Richard Shiro)

—Tua Tagovailoa, Alabama, threw for a career-best 444 yards — third-most in school history — and five TDs in a 47-23 victory over South Carolina.

—Chuba Hubbard, Oklahoma State, rushed for a career-high 256 yards and three TDs as the Cowboys defeated the Golden Hurricane 40-21.

—Malcolm Perry, Navy, ran for four TDs, threw for two more scores and accounted for 307 yards to guide the Midshipmen to a 42-10 rout of defenseless East Carolina.

—Jalen Hurts, Oklahoma, accounted for 439 yards and four TDs, leading the fifth-ranked Sooners to a 48-14 rout of UCLA.

—Kyle Trask, Florida, relieved an injured Feleipe Franks and orchestrated three fourth-quarter touchdown drives, including his go-ahead, 4-yard scoring run with 4:11 remaining that lifted the No. 9 Gators to a 29-21 victory over Kentucky.

—Trevor Lawrence, Clemson, threw for 395 yards and three TDs and ran for another score as the top-ranked Tigers beat nemesis Syracuse 41-6.

—J.K. Dobbins, Ohio State, ran for 193 yards and scored two TDs in little over a half as the sixth-ranked Buckeyes blew out Indiana 51-10.

—Jah-Maine Martin, North Carolina A&T, ran for a career-high 299 yards and two TDs in a 27-21 win over Charleston Southern.

—Logan Marchi, Sacred Heart, threw for 407 yards and tied a school record with six TD passes in a 56-40 win over Lafayette.

—Quentin Harris, Duke, accounted for 343 yards and four TDs in a 41-18 win over Middle Tennessee.

Initially stunned by seeing Feleipe Franks lying in pain on the turf, Florida players soon swarmed the cart carrying him to uplift him — and then each other.

The No. 9 Gators then regrouped behind backup Kyle Trask to overwhelm Kentucky for an emotional victory.

Trask relieved the injured Franks and rallied Florida with three fourth-quarter touchdown drives, including his go-ahead, 4-yard scoring run with 4:11 remaining that lifted the Gators to a 29-21 victory.

Franks, the Gators' third-year starter, was carted off with a right leg injury late in the third quarter with his team trailing 21-10. Stopped for no gain by Calvin Taylor on fourth-and-1 at the Kentucky 38, Franks appeared to bend backward on the tackle. Medical personnel came on the field and placed an inflatable cast under his right leg and he was taken off to applause from the sellout crowd of 63,076.

Alabama quarterback Tua Tagovailoa focused on what his team needs to work on instead of his career performance.

Tagovailoa threw for a career-best 444 yards — the third most in history for No. 2 Alabama — and tied his high with five touchdown passes in a 47-23 victory over South Carolina.

Tagovailoa, the All-American and Heisman Trophy contender, had TD throws of 24 yards to Najee Harris and 81 yards to Henry Ruggs III in the opening quarter. When the Gamecocks closed to 17-10, Tagovailoa hit Harris who finished a nifty run where he broke through one tackler, leaped over another and dragged a third over the goal line with him.

BYU should be getting accustomed to coming from behind to beat traditional powers.

Dayan Ghanwoloku intercepted a tipped pass in overtime after Jake Oldroyd kicked a 43-yard field to give the Cougars the lead, and BYU held on to beat No. 24 Southern California 30-27 — one week after a similar fourth-quarter rally to knock off Tennessee.

Zach Wilson threw for 280 yards and a touchdown while running for another score, Ty'Son Williams had 99 yards rushing, and the Cougars (2-1) capitalized on three crucial turnovers.

It took the Cougars a few minutes to digest that they had beaten a ranked opponent at home since defeating then-No. 20 Boise State in 2015. Fans stormed the field immediately after the interception Saturday, then stormed a second time when a review confirmed the call on the field.

7_Rushing touchdowns by Western Michigan in a 57-10 win over Georgia State to set a school record.

14_Straight wins by Cincinnati over Miami of Ohio following a 35-13 win.

34_Straight points by Duke in a 41-18 win over Middle Tennessee, breaking the school record.

100_All-time meetings between Penn State and Pittsburgh, schools separated by 39 miles. The No. 13 Nittany Lions won the latest game 17-10.

Coach Brent Thompson was working as The Citadel's offensive coordinator when the school upset South Carolina four years ago.

Now that he's got a signature win of his own, Thompson has a big building block for his team.

Jacob Godek kicked a 37-yard field goal in overtime, quarterback Brandon Rainey ran for one touchdown and passed for another, and FCS The Citadel stunned Georgia Tech with a 27-24 upset victory.

The Bulldogs (never trailed despite having lost FCS games at home to Towson and on the road to Elon. Beating the Jackets gave The Citadel its first win over an FBS opponent since 2015 against South Carolina. Before that, the Bulldogs had not won against the higher classification since knocking off Arkansas and Army in 1992.