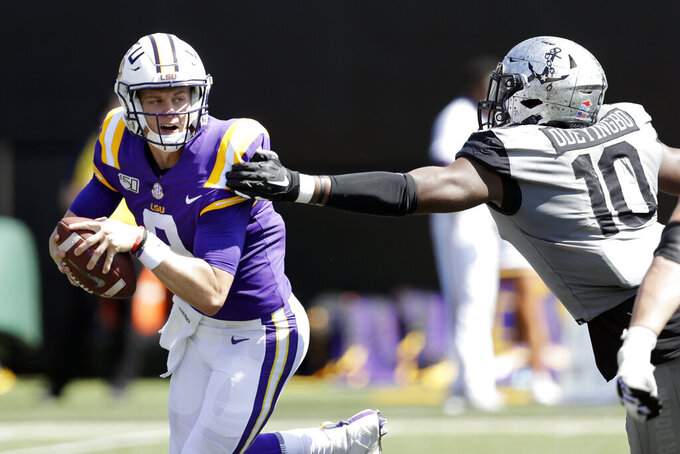 —Brock Purdy, Iowa State, threw for a career-high 435 yards and tied a school record with six touchdowns and the Cyclones throttled Louisiana-Monroe 72-20, their best scoring output in 113 years.

—Joe Burrow, LSU, tossed four of his school-record six touchdown passes to Ja'Marr Chase and threw for 398 yards, leading the No. 4 Tigers to a 66-38 romp over Vanderbilt.

—Justin Fields, Ohio State, threw for four TDs and rushed for two more scores in the second quarter as the No. 6 Buckeyes cruised to a 76-5 win over Miami (Ohio).

—Sam Ehlinger, Texas, passed for four TDs and the No. 12 Longhorns ended four years of frustration against Oklahoma State with a 36-30 win.

—Andrew Edgar, Illinois State, had a career-high 228 yards on 12 catches in a 40-27 victory over Northern Arizona.

—Evan Weaver, Cal, had 22 tackles and stopped Ole Miss quarterback John Rhys Plumlee for no gain at the 1-yard line as time expired to preserve No. 23 Cal's 28-20 victory over the Rebels.

—Bronson Rechsteiner, Kennesaw State, rushed for a school-record 221 yards and a touchdown on 10 carries in a 35-24 win over Missouri State.

—Tommy DeVito, Syracuse, accounted for five touchdowns and 371 yards in a 52-33 win over Western Michigan.

—EJ Perry, Brown, accounted for five touchdowns and 411 yards in a 35-30 victory against Bryant.

—Tevaka Tuioti, New Mexico, threw for a career-high 355 yards and three TDs in a 55-52 win over rival New Mexico State.

—Earnest Edwards, Maine, returned two kickoffs for TDs for the second time in his career in a 35-21 win over Colgate.

—Davis Alexander, Portland State, threw for a career-high five TDs and 366 yards in a 59-9 win over Eastern Oregon.

On a raucous night between the hedges, No. 3 Georgia held on for a gutsy win that might have ramifications all the way to the College Football Playoff.

For No. 7 Notre Dame, it was another big-game loss but a performance that should bring more respect.

Jake Fromm threw a 15-yard touchdown pass to Lawrence Cager early in the fourth quarter and the Bulldogs survived for a 23-17 victory that was much tougher than many expected.

Ian Book's 4-yard touchdown pass to Chase Claypool cut the deficit with 3:12 remaining, the Notre Dame defense held, and Book got the ball back at his own 48 after a poor punt with just under 2 minutes to go.

The Irish got as far as the Georgia 38, but no farther. It ended with Book zig-zagging on a desperate scramble before hurling up a long pass that fell incomplete, denying Notre Dame the signature win over a top opponent it so desperately needs in its first visit ever to Sanford Stadium.

UCF's bid for another self-proclaimed national title ended on a trick play.

The Panthers ended UCF's 25-game regular-season winning streak on a play head coach Pat Narduzzi called the "Pitt Special" in a nod to the Philadelphia Eagles, who ran a similar play two seasons ago in their Super Bowl victory over the New England Patriots.

Pitt trailed by six when Pickett drove the Panthers to the UCF 3. Running back A.J. Davis took a direct snap with Pickett going in motion. Davis handed the ball to Matthews, who rolled to his right and hit Pickett in the end zone. UCF's last-gasp drive went nowhere.

LSU always has played stingy defense. Now the Tigers have a high-octane offense and no plans at all to slow down anytime soon.

Joe Burrow tossed four of his school-record six touchdown passes to Ja'Marr Chase and threw for 398 yards, leading No. 4 LSU to a 66-38 romp over Vanderbilt.

LSU beat Vanderbilt for the eighth straight time. This marked the first meeting between these SEC charter members since 2010.

The Tigers scored their most points this season and most ever in regulation against an SEC opponent. The 104 combined points tied South Carolina's 65-39 win over Mississippi State in 1995 for the fourth-highest scoring total in an SEC game that didn't go into overtime.

19_Straight wins by top-ranked Clemson after a 52-10 victory over Charlotte.