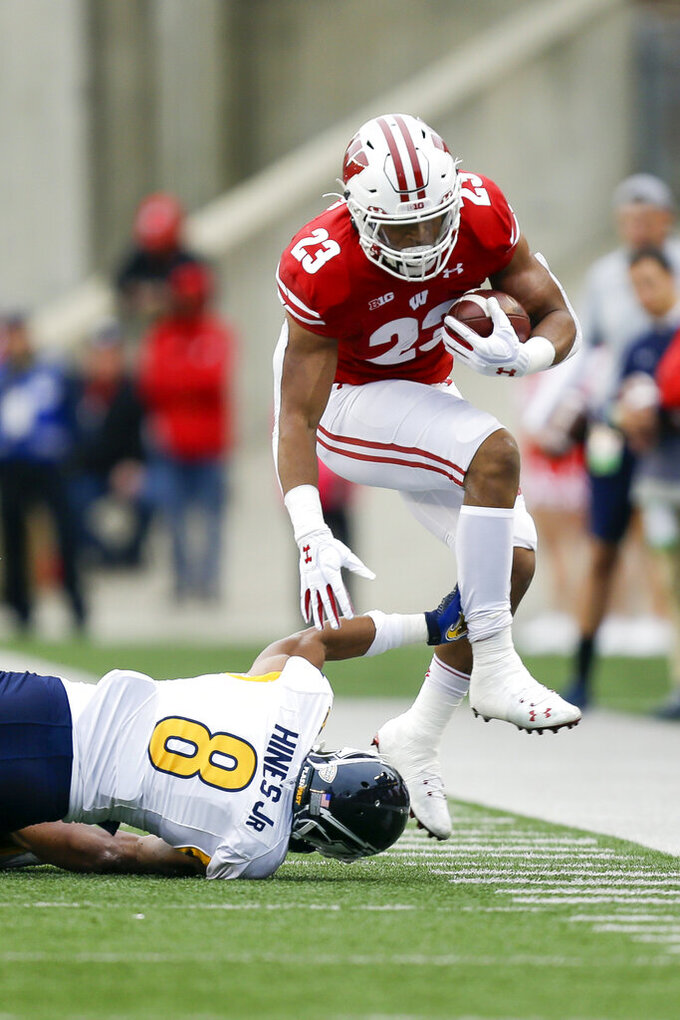 —Jonathan Taylor, Wisconsin, ran for 186 yards and accounted for five TDs, helping the eighth-ranked Badgers coast to a 48-0 win over Kent State.

—Jalen Hurts, Oklahoma, threw for 228 yards and accounted for four TDs in the No. 6 Sooners' 45-20 blowout of Kansas.

—Rodney Smith, Minnesota, ran for a career-best 211 yards and a TD to help the Gophers beat Illinois 40-17.

—Khalil Tate, Arizona, threw for 404 yards and three TDs in his return from a leg injury to lead the Wildcats to a 35-30 win over Colorado.

—Sam Howell, North Carolina, threw for 396 yards and four TDs in a 38-22 victory over Georgia Tech.

—Jack Cook, Dayton, threw four of his school-record six TD passes to Adam Trautman in a 56-28 win over Jacksonville.

—Ian Book, Notre Dame, threw a career-high five TD passes and had only four incompletions in a little more than two quarters in the No. 9 Fighting Irish's 52-0 victory over Bowling Green.

Leaning on a sack-making, turnover-producing defense, No. 19 Michigan earned a desperately needed win.

Zach Charbonnet ran for a 2-yard touchdown to give the Wolverines an early double-digit lead and their defense did the rest in a 10-3 win over No. 14 Iowa, forcing four turnovers and tallying eight sacks.

The Wolverines were held scoreless over the final three quarters because they could not run or pass effectively, scoring just three points off the Hawkeyes' turnovers.

Iowa failed to take advantage of favorable field position on its final two drives with a chance to extend the game or possibly win it with a touchdown and 2-point conversion.

Lamical Perine was too slow to play for Auburn three years ago, a hurtful evaluation that's stuck with him.

He showed plenty of speed while running away from the Tigers — and a few guys he played against in high school — in the Swamp.

Perine broke loose for an 88-yard touchdown run in the fourth quarter, Florida's defense delivered another gem and the No. 10 Gators beat seventh-ranked Auburn 24-13 in a matchup of unbeaten teams.

Perine broke linebacker K.J. Britt's tackle at the line of scrimmage and scampered down the sideline for the program's longest TD run in more than 30 years. It gave the Gators (6-0, 3-0 Southeastern Conference) extra breathing room in a game they never trailed.

Doing it against Auburn was extra special.

15_Wins with no losses all-time by San Diego against Marist after a 31-7 victory.

33_Straight games with a TD pass by Oregon's Justin Hebert.

Shane Buechele threw a 25-yard touchdown to James Proche in the third overtime and the No. 24 Mustangs beat Tulsa 43-37, coming back from a three-touchdown deficit in the fourth quarter to win in its first game as a ranked team in 33 years.

SMU this week moved into the AP poll for the first time since October 1986, before NCAA sanctions that included the death penalty. The Mustangs didn't field a team in 1987 and 1988.