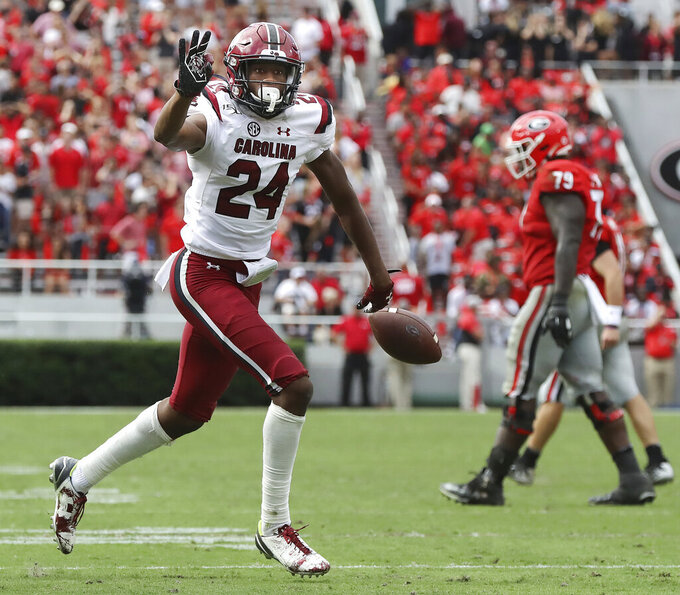 —Israel Mukuamu, South Caolina, returned the first of his three interceptions 53 yards for a TD and the Gamecocks took advantage of Jake Fromm's four turnovers to beat No. 3 Georgia 17-10 in double overtime.

—Jayden Daniels, Arizona State, scored on a 17-yard scramble with 34 seconds left and threw three touchdown passes to ailing Brandon Aiyuk, leading the No. 18 Sun Devils to a 38-34 comeback victory over Washington State.

—Tua Tagovailoa, Alabama, threw four TDs and the Crimson Tide's offense kept rolling in the Tide's first game at No. 1 this season with a 47-28 victory over No. 24 Texas A&M.

—Joe Burrow, LSU, passed for 293 yards and three TDs, and the fifth-ranked Tigers scored three straight touchdowns after falling behind early in the second half to emerge with a 42-28 victory over No. 7 Florida.

—Jordan Cronkrite, South Florida, ran for 158 yards and two TDs to help the Bulls rally in the fourth quarter to beat BYU 27-23.

—Juwan Carter, Norfolk State, accounted for 441 yards and five TDs in a 49-21 victory over Howard.

—Brandon Rainey, The Citadel, completed three passes — all for touchdowns — and ran for two more and the Catamounts beat Western Carolina 35-17.

—Reid Sinnett, San Diego, threw five TD passes and the Toreros pushed their conference win streak to 31 games with a 37-17 over Davidson.

—Quez Watkins, Southern Mississippi, caught eight passes for 198 yards and a score in a 45-27 win over North Texas.

It was four turnovers — on the usually rock-solid Fromm's three interceptions and lost fumble — that put a big dent in the Bulldogs' championship hopes.

Israel Mukuamu returned the first of his three interceptions 53 yards for a touchdown and South Carolina took advantage of the turnovers to beat No. 3 Georgia 20-17 in double overtime.

Parker White's 23-yard field goal in the second overtime proved to be enough when Blankenship was wide left from 42 yards. Blankenship's second miss of the game sent South Carolina players charging onto the field to celebrate the upset.

Joe Burrow passed for 293 yards and three touchdowns, and the fifth-ranked Tigers scored three straight touchdowns after falling behind early in the second half to emerge with a 42-28 victory over No. 7 Florida.

Facing a Florida defense that came in leading the nation in interceptions and leading the Southeastern Conference in sacks, the Tigers totaled 511 yards without giving up a sack or committing a turnover.

Ja'Marr Chase had 127 yards receiving and the last of his two touchdowns was a 54-yarder to give LSU a two-score lead with 5:43 left. Justin Jefferson caught 10 passes for 123 yards and a touchdown.

Jalen Hurts tried the Golden Hat on for size and gave a half-hearted "horns down" sign in a group photo with the cheerleaders while celebrating the way Kyler Murray couldn't in the Red River rivalry a year ago.

Now the Oklahoma quarterback will try to get the Sooners back to where Baker Mayfield and Murray took them the past two years, and where he's been himself three times at Alabama: the College Football Playoff.

A year after a Murray-led comeback fell short in a 48-45 loss in the Red River rivalry that led to the firing of their defensive coordinator, the Sooners harassed Ehlinger into minus-9 yards rushing.

3_Wins by the Mountain West Conference in five games against the Southeastern Conference this season.

29_Points allowed by No. 8 Wisconsin this season after a 38-0 win over Michigan State. The Badgers have four shutouts for the first time since 1930.

100_Career wins by Dartmouth coach Buddy Teevins after a 42-10 win over Yale.