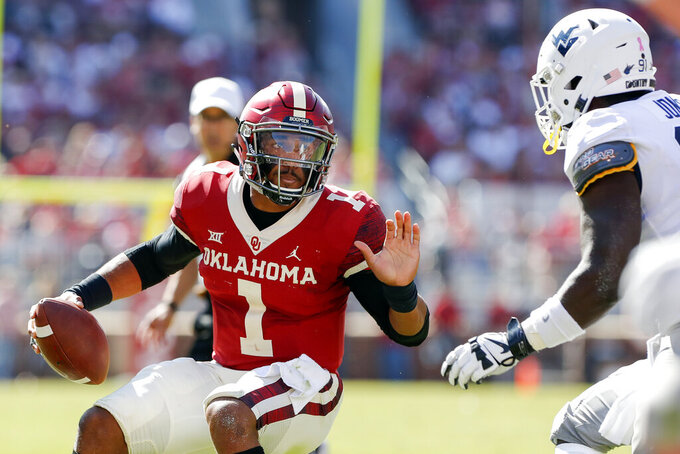 —Jalen Hurts, Oklahoma, accounted for 393 yards and five TDs as the No. 5 Sooners cruised to a 52-14 victory over West Virginia.

—Joe Burrow, LSU, threw for 327 yards and four TDs to break the school season record with 29 in the No. 2 Tigers' 36-13 victory over Mississippi State.

—Travis Etienne, Clemson, rushed for 192 yards and a score and the No. 3 Tigers routed Louisville 45-10 for their 22nd consecutive victory.

—Kevin Davidson, Princeton, threw for 379 yards and five TDs as the Tigers rolled to a 65-22 win over Brown.

—Kyle Trask, Florida, threw for a career-high four TDs to help the No. 9 Gators bounce back from its loss at LSU to outlast South Carolina 38-27.

—Tom Flacco, Towson, threw a school-record six touchdown passes in the first half in a 56-7 rout of Bucknell.

—Sirgeo Hoffman, Portland State, ran for a career-high 221 yards and two TDs in a 38-30 win over Northern Colorado.

The plan was for Wisconsin to roll into a showdown with Ohio State next week unbeaten, with a defense putting up historic numbers and a Heisman Trophy contender at running back.

Illinois had other plans.

James McCourt kicked a 39-yard field as time expired and the Illini pulled off the biggest upset of the college football season, knocking off No. 6 Wisconsin 24-23.

Tony Adams picked off a pass by Jack Coan for the Illini, who were 30 1/2-point underdogs, at midfield with 2:33 remaining that set up the winning drive

1_Victories by No. 24 Appalachian State as an AP Top 25 team after beating Louisiana-Monroe 52-7. The Mountaineers lost to Georgia Southern last season, the only other time they've been ranked.

For all he's accomplished in his Oregon career, Justin Herbert had never faced the challenge of rallying from this much of a deficit, on the road and against the Ducks' most hated rival.

Doing so would all but lock up the Pac-12 North, keep Oregon on the very fringes of the College Football Playoff conversation and put a nail in Washington's hopes of repeating as conference champs.

What was expected to be a defensive showdown turned into an offensive shootout with both Herbert and Washington quarterback Jacob Eason taking the spotlight.

Eason was great. Herbert was better.