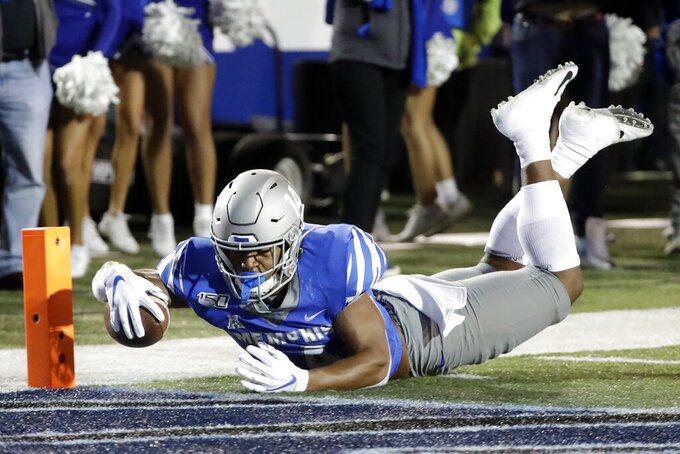 Memphis wide receiver Antonio Gibson dives for the end zone against SMU in the first half of an NCAA college football game Saturday, Nov. 2, 2019, in Memphis, Tenn. Gibson was ruled down just short of the goal line. (AP Photo/Mark Humphrey)

—Mason Fine, North Texas, threw a career-high seven TD passes to lead the Mean Green to a 52-26 victory over UTEP.

—Kylin Hill, Mississippi State, ran for a career-high 234 yards and three TDs as the Rebels rushed for 460 yards in a 54-24 demolition of Arkansas.

—Travis Etienne, Clemson, ran for 212 yards and two TDs as the No. 4 Tigers won their 24th consecutive game, rolling over FCS opponent Wofford 59-14.

—Bryan Edwards, South Carolina, had a school-record 14 catches for 139 yards and a TD as the Gamecocks beat Vanderbilt 24-7.

—Eric Barriere, Eastern Washington, accounted for 468 yards and four TDs in a 66-38 rout of Northern Arizona.

—Jamie Newman, Wake Forest, returned from injury to throw for three touchdowns and run for two more as the No. 23 Demon Deacons beat North Carolina State 44-10.

—Geremy Hickbottom, Grambling, accounted for five TDs in a 55-20 win over Texas Southern 55-20.

—Xavier Smith, Florida A&M, had 184 yards and four TDs receiving in a 52-30 win over Delaware State.

— Kurt Rawlings, Yale, threw for 390 yards and accounted for four touchdowns in a 45-10 win over Columbia.

Jake Fromm was a little late to the after-party.

He was in the third and final wave of Georgia players leaping into the stands at the "World's Largest Outdoor Cocktail Party."

It was a fitting spot for Fromm considering how effective he's been on third down against Florida.

Fromm threw for 279 yards and two touchdowns, including a 52-yarder to an uncovered Lawrence Cager in the fourth quarter, and the No. 8 Bulldogs beat the sixth-ranked Gators 24-17.

It was Georgia's third consecutive victory in the Southeastern Conference rivalry and sixth in the last nine years.

Fromm was the main reason for the last two. He has five touchdown passes in two years against Florida, four coming on third down.

691_Total yards by Boston College in a 58-27 win over Syracuse, breaking the school record.

The past month looked, and felt, so easy for No. 9 Utah. One blowout after another. No tests for the Utes to answer.

They knew traveling to Washington would be different, and they were right. The Utes were challenged; falling behind early and rallying late, and in doing so solidified their spot in the College Football Playoff conversation.

Tyler Huntley threw for one touchdown and ran for another, Jaylon Johnson returned an interception 39 yards for a score, and No. 9 Utah overcame an 11-point first-half deficit to beat Washington 33-28.

The Utes did their part in keeping pace in the Pac-12 South race and bolstered their CFP resume with a road win over a talented opponent in a place where it's never come easy for Utah.