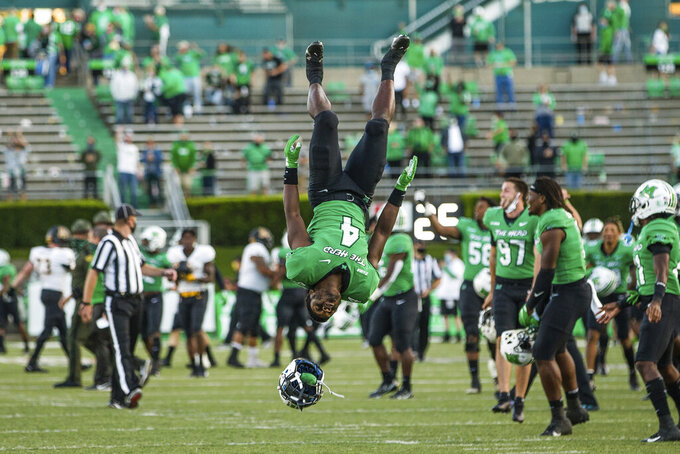 Marshall's Lawrence Papillon (4) does a backflip as Marshall players celebrate a win over No. 23 ranked Appalachian State after an NCAA college football game Saturday, Sept. 19, 2020, in Huntington, W.Va. (Sholten Singer/The Herald-Dispatch via AP)

—Trevor Lawrence, Clemson, threw three TD passes in nine attempts and ran for another score, and the No. 1 Tigers beat The Citadel 49-0.

—Dillon Gabriel, Central Florida, threw for a career-best 417 yards and four TDs to lead the No. 14 Knights to a 49-21 victory over Georgia Tech.

—Elijah Mitchell, Louisiana-Lafayette, rushed for 164 yards, including the winning touchdown in overtime, and the No. 19 Rajin' Cajuns topped Georgia State 34-31.

—Brenden Knox, Marshall, rushed for 138 yards and a TD to help the Thundering Herd beat No. 23 Appalachian State 17-7.

—Gerrid Doaks, Cincinnati, scored four TDs, including a career-high three on the ground, and the Bearcats beat Austin Peay 55-20.

— Malik Willis, Liberty, rushed for 168 yards and three TDs in the Flames' 30-24 victory over Western Kentucky.

—Frank Harris, UTSA, accounted for 373 yards and three TDs in a 24-10 victory over Stephen F. Austin.

It was that kind of day for No. 1 Clemson.

Lawrence and star running back Travis Etienne got plenty of rest as the top-ranked Tigers rolled to a 49-0 victory over The Citadel.

Lawrence was 8 for 9 for 168 yards, including first-half scoring passes of 54 and 17 yards to Frank Ladson Jr. and 44 yards to Amari Rodgers.

Lawrence also rushed for his third TD already this season, leading the way as the Tigers improved to 35-0 against teams from the Football Championship Subdivision. Clemson came out fast, stayed sharp and played just about everybody available in the runaway victory.

Marshall is off to a thundering start.

Brenden Knox rushed for 138 yards and a touchdown, quarterback Grant Wells came up with back-to-back big plays when Marshall needed them and the Thundering Herd beat No. 23 Appalachian State 17-7.

Appalachian State (1-1) squandered a couple of late opportunities and was held scoreless in the second half.

24_Points Navy came back from in a 27-24 win over Tulane for the largest comeback in program history.

44_Years since Marshall beat a ranked opponent at home before beating No. 23 Appalachian State 17-7.