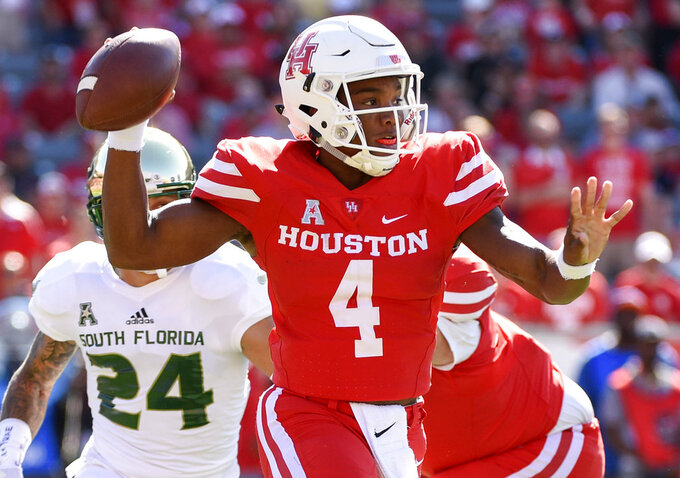 —D'Eriq King, Houston, had a hand in a career-high seven TDs and accounted for 543 yards in the Cougars' 57-36 victory over No. 21 South Florida.

—Eric Dungey, Syracuse, threw for 411 yards and accounted for four TDs as the Orange held off No. 22 North Carolina State 51-41.

—Kyler Murray, Oklahoma, passed for 352 yards and three TDs and ran for another score to help the No. 8 Sooners beat Kansas State 51-14.

—Taylor Cornelius, Oklahoma State, threw for 321 yards and accounted for five TDs to help the Cowboys beat No. 6 Texas 38-35.

—Brett Rypien, Boise State, threw for 399 yards and five TDs as the Broncos pulled away late to beat Air Force 48-38.

—Matt Colburn II, Wake Forest, rushed for career highs of 243 yards and three TDs in a 56-35 rout of Louisville.

—Jordan Meachum, Sacred Heart, rushed for a school-record 318 yards and three TDs in a 47-27 win over Bryant.

—Jordan Love, Utah State, threw for a career-high 448 yards and accounted for five TDs in the first half of a 61-19 win over New Mexico.

—Javon Leake, Maryland, rushed for three TDs and scored on a 97-yard kickoff return as the Terps rolled past Illinois 63-33.

—Deon Jackson, Duke, set a school record with 403 all-purpose yards in a 54-45 loss to Pittsburgh.

—Jareem Westcott, Stetson, rushed for 213 yards and five TDs in a 56-53 victory over Davidson.

—Kristian Wilkerson, Missouri State, set a school record with 263 receiving yards and had three TDs in a 56-33 win over Tennessee-Martin.

—Chase Fourcade, Nicholls State, passed for four TDs and ran for another in a 48-21 win over Incarnate Word.

Jeremiah Holloman, Terry Godwin and Mecole Hardman were among the first wave of Georgia players to jump into the stands.

They screamed, danced and posed for pictures, frolicking in the aftermath of a second straight victory against rival Florida in the "World's Largest Outdoor Cocktail Party."

Their Jacksonville leap was a huge turnaround after their Baton Rouge flop.

The Bulldogs took advantage of Florida's three turnovers and an injury to cornerback C.J. Henderson to bounce back from a 20-point loss at LSU and beat the Gators for the fifth time in the last eight years.

Georgia now can repeat as SEC East champions with a victory at 12th-ranked Kentucky next week.

Trace McSorley visited the injury tent. Not much in there, he said. Just a table for him to sit on while his right knee was being checked out in the second quarter of Penn State's game against Iowa.

The senior quarterback, barely 6 feet tall and 200 pounds but able to carry Penn State's offense, has started 35 straight games and only has two more left at Beaver Stadium. He was not about to sit out the second half of this one.

Nittany Lions safety Nick Scott intercepted a pass at the 2 with 3:18 left in the fourth quarter to thwart one Hawkeyes drive and Penn State needed one more stop after that. Iowa drove to the Nittany Lions' 44 in the final minute.

On fourth-and-10 with 7 seconds remaining, Penn State's pass rush swarmed Nate Stanley, who flipped backward to offensive tackle Tristan Wirfs. The 300-pounder rumbled 15 yards before being dragged down with no time left.

11_Straight losses by Idaho State to Montana State before beating the Bobcats 24-17.