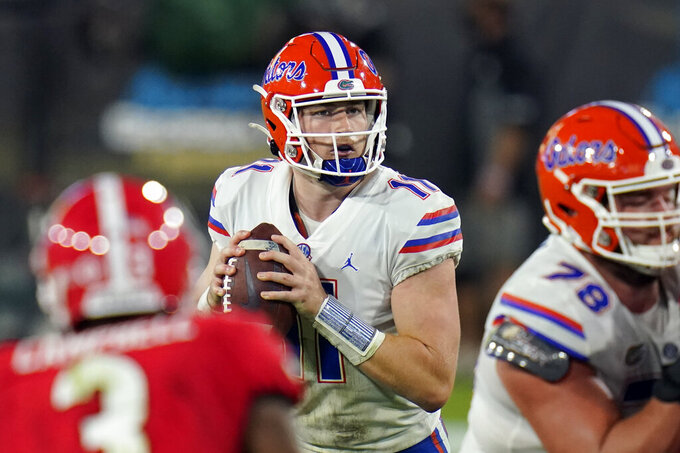 Florida quarterback Kyle Trask (11) looks for a receiver during the second half of the team's NCAA college football game against Georgia, Saturday, Nov. 7, 2020, in Jacksonville, Fla. (AP Photo/John Raoux)

—Kyle Trask, Florida, threw for 474 yards and became the first quarterback in SEC to have at least four TD passes in fives straight games, helping No. 8 Florida beat fifth-ranked and undermanned Georgia 44-28.

—Michael Penix Jr., Indiana, passed for 342 yards and three TDs, helping the No. 13 Hoosiers beat No. 23 Michigan 38-21 for their first victory against the Wolverines in 33 years.

—Shane Buechele, SMU, threw four TD passes, two to Tyler Page, and the No. 18 Mustangs broke away from undermanned Temple 47-23.

—Gerrid Doaks, Cincinnati, rushed for a career-high 184 yards and a TD as the No. 6 Bearcats rolled past Houston 38-10.

—Max Duggan, TCU, ran for 154 yards and three TDs on a day when he threw for only 73 yards, and the Horned Frogs snapped a five-game home losing streak with a 34-18 win over Texas Tech.

—Ronnie Rivers, Fresno State, accounted for 232 yards and scored four TDs in a 40-27 win over UNLV.

—Alfred Grear, Angelo State, ran for 247 yards and four TDs in a 34-21 win over Abilene Christian.

—Jaquarion Turner, Stephen F. Austin, ran for a career-best 208 yards in a 24-6 win over Eastern Kentucky

Notre Dame's first takedown of a top-ranked team in 27 years put social-distancing rules to the test.

Kyren Williams had a 3-yard touchdown run in the second overtime and No. 4 Notre Dame shut down top-ranked Clemson with a couple of sacks to seal a 47-40 victory, the Fighting Irish’s first victory over a No. 1 in 27 years.

Clemson had won 36 straight games and had not lost to an Atlantic Coast Conference team since 2017. The Fighting Irish, playing in the ACC only because of the pandemic, snapped both streaks and sparked fans to storm the field in a celebration that most definitely did not meet the CDC’s social-distancing guidelines.

After Williams gave Norte Dame the lead on the first possession of the second OT, the Irish pushed Clemson back with back-to-back sacks on DJ Uaigalelei by Adetokumbo Ogundeji and Daelin Hayes on the Tigers first two plays.

The big freshman quarterback completed to passes after the second-and-39, but the final one was way short of the line to gain and a couple of laterals didn’t help.

Kyle Trask started jumping up and down on the sideline. His Florida teammates took it to another level, running and leaping into the stands.

Even coach Dan Mullen joined the fun after a massive victory.

Trask had another four-touchdown night, becoming the first quarterback in Southeastern Conference history to accomplish the feat in five consecutive games, and the eighth-ranked Gators beat No. 5 and undermanned Georgia 44-28.

The Gators ended a three-game losing streak in the rivalry known as the “World’s Largest Outdoor Cocktail Party” — it was Mullen’s most significant victory in three years in Gainesville — and now have a stranglehold on the SEC’s East Division.

The Bulldogs , who entered the game as 3½-point favorites, were likely eliminated from College Football Playoff consideration and probably have a quarterback competition moving forward.

In the final three minutes of a game that began at 9 a.m. with Southern California’s earliest kickoff in decades, the Trojans finally did a few things worth getting up early to see.

And a couple that had to be seen to be believed.

Drake London caught a 21-yard touchdown pass with 1:20 to play, and USC rallied from a late 13-point deficit for a 28-27 victory over Arizona State in the Pac-12′s long-delayed season opener.

Bru McCoy caught a deflected 26-yard TD pass with 2:52 left, and McCoy then recovered the ensuing onside kick as well. USC’s next drive stalled — but on fourth-and-9, Kedon Slovis fired a desperation pass down the middle to London, and the two-sport athlete beat double coverage to haul it in for an electrifying score

19_Years since Penn State last started 0-3 before this season.

For those doubting Liberty’s initial foray into the Associated Press national rankings, the Flames took a rather large step toward validating themselves.

Alex Barbir hit a career-long, 51-yard field goal with one second remaining to lift No. 25 Liberty to a 38-35 victory over Virginia Tech.

Barbir’s kick punctuated a wild ending for the Flames, who rallied from a 20-14 halftime deficit and moved to 7-0 for the first time in program history.

Virginia Tech tried multiple laterals on the ensuing kickoff before Liberty tackled William Kakavitsas to end the game, and that set off a crazy celebration by the Flames. Players lingered on the Lane Stadium field afterward, with many posing for photos as future keepsakes of the momentous occasion.