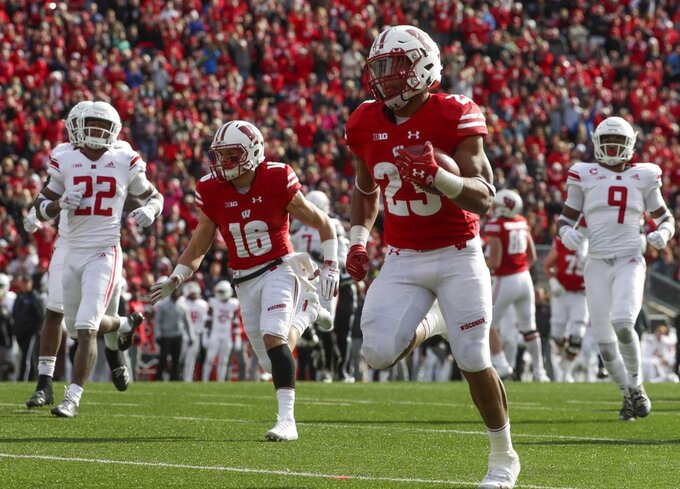 Wisconsin's Jonathan Taylor runs for a touchdown during the second half of an NCAA college football game against Rutgers Saturday, Nov. 3, 2018, in Madison, Wis. (AP Photo/Morry Gash)

—Jonathan Taylor, Wisconsin, rushed for 208 yards and three TDs to help the Badgers run away from Rutgers for a 31-17 win.

—Ross Comis, UMass, threw for a career-best 540 yards and accounted for six TDs in a 62-59 triple overtime victory over Liberty.

—Reggie Corbin, Illinois, rushed for 213 yards and two TDs and became the first Illini player to rush for two 70-yard-plus touchdowns in a single game since 1944 in a 55-31 win over Minnesota.

—Ryan Boyle, Indiana State, had seven touchdowns, including a 3-yard scoring pass to Dante Hendrix in triple overtime, in a 51-48 win over South Dakota.

—Tom Stewart, Harvard, passed for 393 yards and a school record-tying five as the Crimson rolled to a 52-18 victory over Columbia.

—Isaiah Ifanse, Montana State, ran for 227 yards to set a school freshman record and had three TDs in a 49-42 win over Cal Poly.

—Jimmie Robinson, Bethune-Cookman, rushed for 208 yards and three TDs in a 30-28 win over Morgan State.

Georgia believed it had a point to prove.

They responded Saturday with a performance that convincingly showed Georgia remains the class of the Southeastern Conference Eastern Division. Swift ran for a career-high 156 yards and two touchdowns as the sixth-ranked Bulldogs defeated No. 11 Kentucky 34-17 to clinch the SEC East title.

Holyfield ran for a career-high 115 yards on 18 carries, scoring on a 4-yarder in the third quarter. Georgia rushed for a season-high 331 yards to earn a spot in the SEC championship game Dec. 1 in Atlanta.

No. 5 Michigan wanted to do more than just beat No. 14 Penn State.

The Wolverines wanted to win big, getting revenge after getting routed and humiliated against the Nittany Lions last year.

Michigan got what it wanted.

Shea Patterson accounted for three touchdowns and the Wolverines put together a dominant performance on defense in a 42-7 rout against Penn State.

The Wolverines, No. 5 in the College Football Playoff rankings, moved a step closer toward their goals of winning a conference championship for the first time since 2004 and earning their first spot in the playoffs.

The Nittany Lions scored with 1:59 left, avoiding getting shut out for the first time since 2001 against Michigan.

41_Years since Tulane had won in the state of Florida before beating South Florida 41-15.