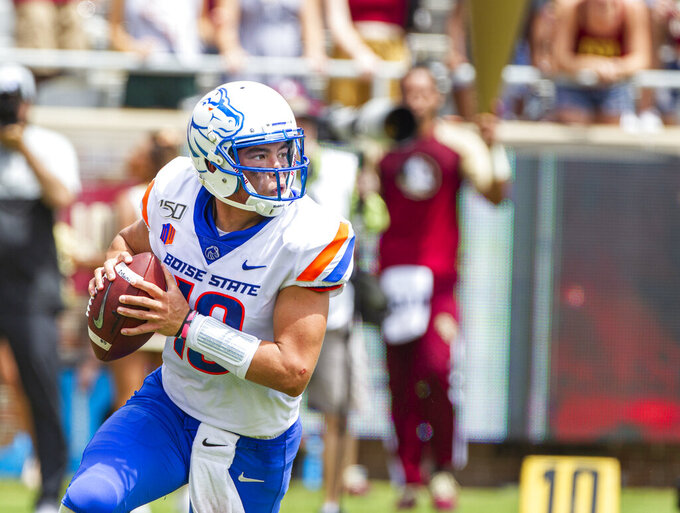 Boise State quarterback Hank Bachmeier (19) rolls out to pass in the first half of an NCAA college football game against Florida State in Tallahassee, Fla., Saturday, Aug. 31, 2019. (AP Photo/Mark Wallheiser)

—Jacob Eason, Washington, threw for 349 yards and four TDs in his first game in nearly two years, and the No. 13 Huskies opened the season with a 47-14 win over Eastern Washington.

—Trey Lance, North Dakota State, threw for four TDs and ran for two more and the defending FCS champion Bison rolled to a 57-10 victory over Butler.

—Dalton Sneed, Montana, threw for a career-high 430 yards and accounted for four TDs in a 31-17 win over South Dakota.

—Justin Fields, Ohio State, accounted for five TDs in his first game for the fifth-ranked Buckeyes in a 45-21 win over FAU.

Dan Ellington threw two touchdown passes and ran for a third score as 26-point underdog Georgia State upset Tennessee 38-30 on Saturday in one of the first stunners of the college football season.

Georgia State beat a Power Five opponent for the first time since this Sun Belt Conference school launched its program in 2010. The Panthers' closest call before this had come in 2016, when they lost 23-17 to Wisconsin after leading in the fourth quarter.

Tennessee suffered one of the more embarrassing setbacks in its history, the latest blow for a storied program attempting to bounce back from two straight losing seasons.

Iowa State's first preseason in 41 years was put to a big test against an FCS school.

Croney Jr. scored from a yard out a play after Brock Purdy grabbed a potential game-losing fumble, helping and the 21st-ranked Cyclones rally past Northern Iowa 29-26.

La'Michael Pettway had a pair of touchdown catches for the Cyclones, who barely survived a massive upset after entering the year ranked for the first time since 1978.

Croney fumbled just shy of the end zone on the second-to-last play of the game. But Purdy saw the ball bounce out, and he sprinted from the backfield to recover it at the 1 in perhaps the biggest play of his impressive young career.

24_Wins by Air Force against FCS opponents without a loss after beating Colgate 48-7.

56_First-half points by Maryland in a 79-0 win against Howard, breaking the school record for points in a half.

Hugh Freeze made his coaching debut at Liberty in a hospital bed set up in the coaches' box to support his healing back.

The Flames hosted No. 22 Syracuse in what is arguably the biggest game in Liberty history.

Freeze missed nearly two weeks of practice because of a herniated disk in his back. He had surgery six days after first missing practice, and doctors discovered he also had a serious staph infection.

Freeze arrived at the stadium in a wheelchair a little more than an hour before kickoff. The school set up cameras and audio equipment in the coaches' box that allow him to watch practice from several camera angles and communicate with coaches and players.