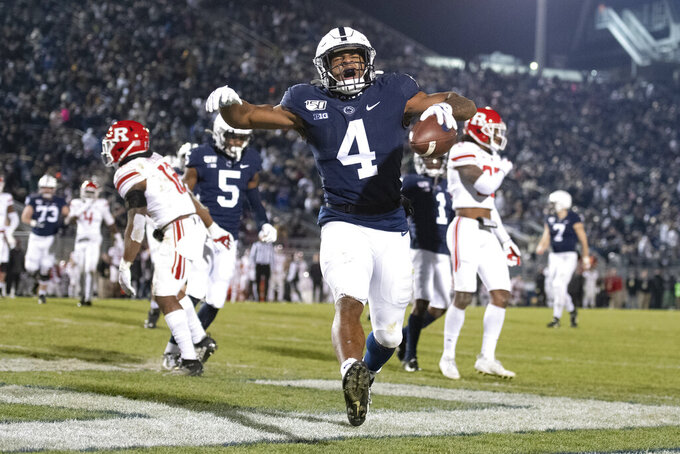 FILE - In this Nov. 30, 2019, file photo, Penn State running back Journey Brown (4) celebrates his third quarter touchdown run against Rutgers during an NCAA college football game in State College, Pa. Big Ten is going to give fall football a shot after all. Less than five weeks after pushing football and other fall sports to spring in the name of player safety during the pandemic, the conference changed course Wednesday, Sept. 16, 2020, and said it plans to begin its season the weekend of Oct. 23-24. (AP Photo/Barry Reeger, File)

With less than three weeks to go before the Big Ten season-opener, Rutgers coach Greg Schiano insists his team's biggest opponent in the football season at this point is the coronavirus pandemic.

Speaking for the first time since the Scarlet Knights started working in full pads last week, Schiano said Monday his team has to remain virus-free if it is to have any chance to win games in the Big Ten Conference this season.

The league has instituted a 21-day, no-play rule for players who test positive for COVID-19. A positive result would effectively sideline a student-athlete for at least three, or possibly four games of an eight-game season.

Rutgers doesn't have the talent to overcome the loss of key players.

The Big Ten had said this summer it would not play football in the fall because of concerns about the pendemic. Last month, it reversed course and decided to play a shortened, conference-only schedule.

The development of rapid daily testing for the coronavirus was a major factor in the decision. Players and coaches are tested every day.

In returning for a second tour at Rutgers, Schiano inherited a team that has won three games in the past two years, and just nine in the past four.

Schiano said his team is working hard to get ready for the opener at Michigan State on Oct. 24. However, he notes he is constantly talking to players about wearing their masks properly, washing their hands, and avoiding the virus, which has claimed more than 200,000 lives in the United States.

“I’ve told our team that’s our number-one opponent right now,” Schiano said. “It’s not on our schedule. If you get on that plane and you don’t have your best players, it’s gonna be tough, right? So we really, really are working hard to to stay healthy and to stay, you know, stay clean of the virus. But it’s a huge challenge. ”

Schiano still has not posted a roster on the university website. He said he expects to have one available next week and a depth chart will be done the week of the opener. He would not discuss his players on Monday, making his team somewhat of a mystery.

He said the uncertainty might leave an opponent in the dark for now.

Rutgers is coming off a 2-10 season. Chris Ash was fired early in his fourth season as coach and Nunzio Campanile, now a member of Schiano's staff, finished the year.

The 54-year-old Schiano was the Scarlet Knights' head coach from 2001-11. He posted a 68-67 record, taking the team to bowl games in six of his final seven seasons. He left to become head coach of the Tampa Bay Bucs of the NFL and struggled for two seasons before he was fired in December 2013. He spent most of his recent time as an assistant coach in the college ranks before returning to Rutgers.