Schiano sees blueprint for Rutgers when he eyes Northwestern 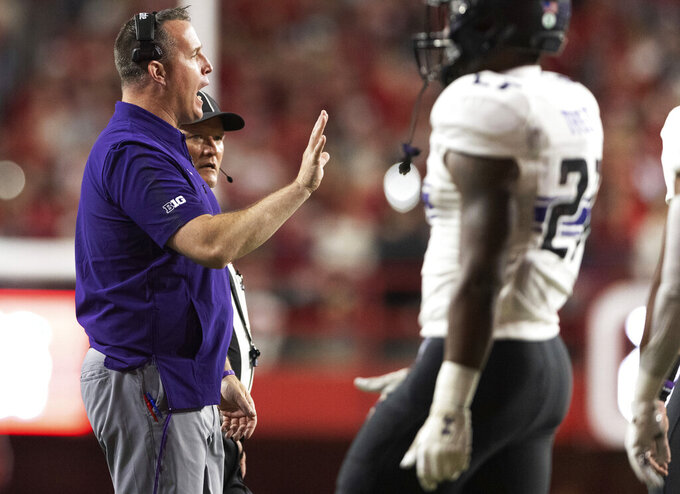 Northwestern head coach Pat Fitzgerald speaks to his players during a timeout against Nebraska during the second half of an NCAA college football game, Saturday, Oct. 2, 2021, at Memorial Stadium in Lincoln, Neb. (AP Photo/Rebecca S. Gratz)

Greg Schiano remembers the impression Pat Fitzgerald left on him all those years ago. The two coaches developed a friendship that endures to this day.

“Pat and I were represented by the same guy early on,” Schiano said. “We visited at the beginning of his tenure as a head coach, and I was so impressed. Really, like I said, this guy is a star. And sure enough, he's been every bit and then some.”

Schiano sees Northwestern as a blueprint for Rutgers, and he'll get an up-close look when his Scarlet Knights visit the Wildcats on Saturday.

Rutgers (3-3, 0-3 Big Ten) comes in looking to bounce back from three straight losses to teams currently ranked in the top 10. The Scarlet Knights were missing leading receiver Bo Melton because of a shoulder injury last week, and the defense got burned for big plays in a 31-13 loss to Michigan State. Northwestern (2-3, 0-2) got pounded 56-7 at Nebraska two weeks ago before a bye week.

Recent lopsided losses aside, Schiano sees some similarities to Northwestern and an example for Rutgers to follow.

Both schools near major cities boast strong academics, though one is private and the other public. Northwestern has been a consistent winner under Fitzgerald with two Big Ten West championships the past three seasons. Rutgers is trying to get there again under Schiano, who built a winner when he led the Scarlet Knights from 2001 to 2011 before leaving to coach the Tampa Bay Buccaneers.

Northwestern boasts a sparkling lakefront practice facility and has a stadium overhaul planned. Rutgers has plans in the works for a new facility.

“(Fitzgerald has) done an incredible job, and all they've done is continue to build,” Schiano said. “It's a great model for us to follow, as far building. ... Pat has built Northwestern into a legitimate contender year-in and year out. We'd like to pattern ourselves after (Northwestern).”

The Wildcats went from winning the division in 2018 to finishing last the following year. And they're following a similar pattern this season after losing major contributors in the offseason such as quarterback Peyton Ramsey and linebackers Blake Gallagher and Paddy Fisher as well as cornerback Greg Newsome II.

Even so, the score against Nebraska was jarring. It matched the second-most lopsided loss since Fitzgerald took over for the late Randy Walker in 2006.

“I think they're working their tails off," Fitzgerald said. "What I've got to find a way to do is get them to take the work that they're putting in during the week, which I have zero issues with ... into the games.”

Since joining the Big Ten in 2014, Rutgers has played in every stadium in the conference, expect one. That ends Saturday when the Scarlet Knights visit Ryan Field.

The Scarlet Knights will play their next two games in Illinois. After facing Northwestern, they get a week off and return to play Illinois on Oct 30.

Northwestern quarterback Ryan Hlinski made a jump in his second start. The South Carolina transfer completed 25 of 39 passes against Nebraska for 256 yards and his first touchdown this season. Hilinski had 88 yards in the win over Ohio the previous week.

For the first time in a month, Rutgers is not playing a ranked team. After opening the season with wins over Temple, Syracuse and Delaware, the Scarlet Knights were beaten in consecutive weeks by No. 8 Michigan (6-0), No. 6 Ohio State (5-1) and No. 10 Michigan State (6-0). In each game, they were held to 13 points.

The run marked only the second time in school history they had played three ranked teams in consecutive games. The other time was in 2009, when they went 1-2, beating No. 23 South Florida. That was the last time they have beaten a ranked team. They have a 33-game losing streak against ranked teams.

Fitzgerald will get to see some old friends when Northwestern honors the 1995 and 1996 Big Ten championship teams. The Wildcats' coach was a star linebacker back then. The 1995 team went on a fairytale run to the Rose Bowl and ended a string of 23 losing seasons.