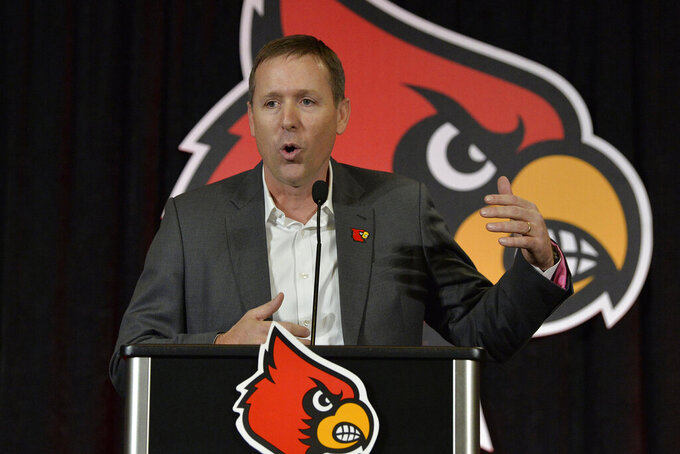 Lack of confidence was evident in the Cardinals' 2-10 season that led to his hiring last Dec. 4 . The disconnect between players and coaches seemed to widen with each lopsided loss — resulting in Bobby Petrino's firing after a 2-8 start. Getting players to buy in to the incoming staff took time.

Louisville's mood has been more upbeat under Satterfield, whose laid-back manner contrasts with the intense Petrino. The Cardinals will need a lot more than positivity to reverse their worst record since 1997 (1-10), but the new coach has stressed encouragement as a critical part of the process.

"You can't always just cuss somebody out 24/7 every time you see them," Satterfield said on media day, drawing laughter. "You have to show, you know, love; give 'em some praise, man.

"We're not as bad as what we sometimes think we are. So, loving them up means we're giving them some praise. We're building them up."

Satterfield, 46, takes over Louisville after going 51-24 with three bowl wins in six seasons at Appalachian State. Offense-minded like his predecessor, he built the Mountaineers into a high-scoring squad that averaged nearly 37 points and 429.6 yards per game when he left for the Cardinals' position last December.

He has his hands full rebuilding a Louisville program that collapsed in all phases a season after the departure of 2016 Heisman Trophy-winning quarterback Lamar Jackson. The Cardinals allowed at least 50 points in seven losses, dropped their final nine games and finished 0-8 in Atlantic Coast Conference play.

Returning 10 defensive starters and seven on offense provides a starting point toward climbing up from near the bottom of many NCAA statistical categories. But there will be growing pains as the Cardinals learn a 3-4 defense and run/pass options on offense.

Satterfield hints that he might not always be warm and fuzzy while trying to turn things around. But he and players understand that it's a project.

"I think we've got a pretty good grasp on what needs to happen," Satterfield said. "The problem is, we have three weeks before we play our first game (against Notre Dame in a nationally televised night game on Sept. 2)."

Here are other things to watch in Satterfield's first season as Louisville's coach:

Junior quarterback Jawon "Puma" Pass will likely begin his second consecutive season as the starter despite a rollercoaster debut. Hyped by Petrino as potentially being more efficient than Jackson running the offense, the 6-foot-4, 239-pounder instead bounced in and out of the lineup with Malik Cunningham and threw more interceptions (12) than touchdowns (eight). Pass said he never really got comfortable last fall but is encouraged by the read option possibilities in Satterfield's offense. "My confidence has always been there," he added, "but it's just coming out more because we're having fun. I feel like I'm a different person."

Louisville has plenty of room for improvement after ranking 122nd out of 129 FBS schools in yards allowed at 483.5 per game last season. Linebacker depth has allowed new coordinator Bryan Brown to shift players to new positions, though the constant remains middle man Dorian Etheridge, who had 55 tackles in 10 games.

The offensive line has been a concern for several seasons, which Dwayne Ledford aims to correct as position coach and offensive coordinator. Ledford built one of the ACC's top lines in three seasons at North Carolina State, one that produced two first team all-conference selections and a Rimington Trophy winner (Garrett Bradbury) as the best center. That will come in handy for a team that allowed 43 sacks last season and hopes to run the ball more.

The opener against Notre Dame, which finished 12-1 and No. 5 in the AP Top 25, begins a challenging schedule that includes visits to Florida State (Sept. 21) and Miami (Oct. 9). Louisville will host defending national champion Clemson (Oct. 19) and in-state rival Kentucky on Nov. 30.