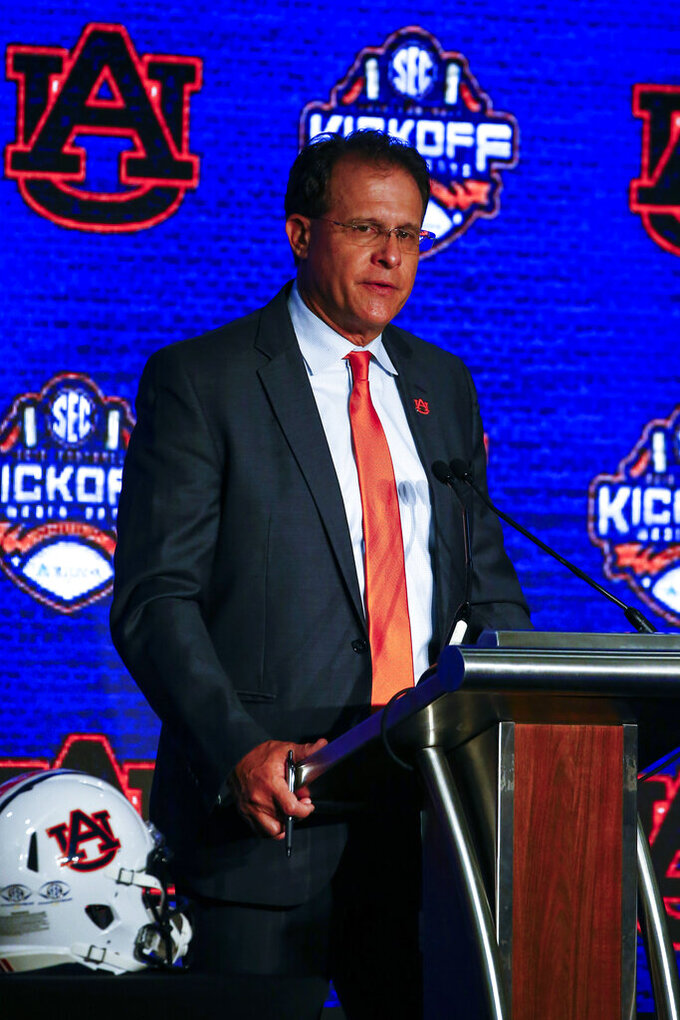 HOOVER, Ala. (AP) — The Southeastern Conference pays big money to its coaches and that's one reason patience is often in short supply when things go wrong.

But in a rare quirk, there were no new head coaches at the podium during SEC media days for the first time since 2006.

Fans should embrace the stability while they can, because if history is any indication it won't last long.

Auburn's Gus Malzahn and Vanderbilt's Derek Mason are among several coaches under varying amounts of pressure to show improvement. Malzahn, Mason and Kentucky's Mark Stoops all took the podium during the final session of SEC media days on Thursday.

If Malzahn is feeling any heat, he isn't showing it.

"That's just part of this job."

Malzahn's enters his seventh year at Auburn after an 8-5 season that included a 3-5 mark in the SEC. The Tigers will have a new quarterback after the departure of Jarrett Stidham and have an intriguing opener against Oregon in Arlington, Texas, on Aug. 31.

Mason's in his sixth year with the Commodores and hasn't had a winning season, though he's finished 6-7 twice, including last year. Mason has a 24-38 record at Vanderbilt, but won three SEC games last season.

He expects that positive momentum to continue. Mason believes he has plenty of "swagger," but that at its core, Vanderbilt requires a blue-collar approach.

"I also know and understand that a place like Vanderbilt is special, and you've got to be a grassroots guy," Mason said. "We've been growing this thing organically. It's taking some time."

The churn of coaching hires and fires is often cyclical, but SEC Commissioner Greg Sankey believes programs realize that coaches must have a little time to build a program.

One recent example is Stoops, who had some mediocre years before breaking through with a 10-win season in 2018. It was the most wins for the Wildcats in 41 years.

"Patience as a virtue is real and continuity is an asset, particularly when there's progression, even if it's incremental," Sankey said. "Over time, in my experience, that's how programs really improve."

Here are other coaches under pressure to show improvement in 2019:

The fourth-year coach has been a solid hire, but a 7-6 season in 2018 — including narrow losses to Texas A&M and Florida — was frustrating. Now the Gamecocks have a senior quarterback in Jake Bentley and there are expectations that the program can be a factor in the Eastern Division race.

The second-year coach doesn't necessarily need to win big this fall, but there's no question the Razorbacks expect more success than in 2018. They struggled through a 2-10 record last season, including a 0-8 mark in the SEC. A matchup against Ole Miss in the second week of the season will be a good litmus test.

Moorhead went 8-5 in his first season in Starkville, which was a slight disappointment considering the Bulldogs had one of the nation's best defenses with three first-round NFL draft picks. The problem was the offense, which must improve if Mississippi State is going to remain competitive in the Western Division.

The third-year Ole Miss coach was a good steward while helping the program weather substantial NCAA punishment in a rules violations case. Now that the two-year postseason ban is over, Luke needs to show that he's a long-term answer in Oxford. A trip to a bowl game — any bowl game — would certainly be a good start.

Pruitt had a decent start to his Tennessee tenure, finishing with a 5-7 record, including two wins over nationally-ranked opponents. Now the Volunteers hope that improvement on offense — led by new coordinator Jim Chaney — can help the program improve quickly. Tennessee's fan base is hungry for success: The Volunteers haven't won 10 games in a season since 2007.