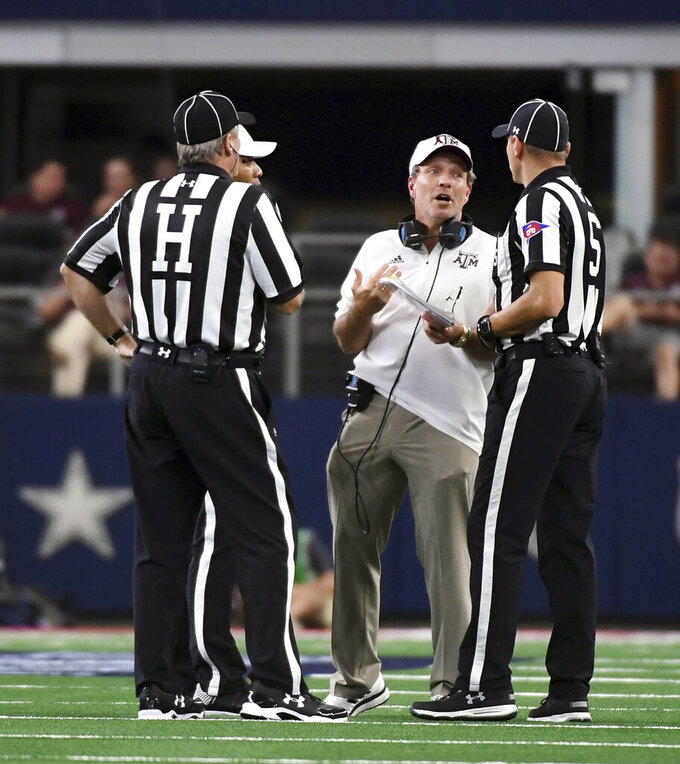 FILE - In this Sept. 29, 2018, file photo, Texas A&M head coach Jimbo Fisher talks to officials during the third quarter of an NCAA college football game against Arkansas, in Arlington, Texas. The Southeastern Conference hired international accounting firm Deloitte to conduct a review of its football officiating. Commissioner Greg Sankey says the move was a reaction in part to the often opinionated view of referees by the public and media. (AP Photo/Jeffrey McWhorter, File)

The Southeastern Conference hired international accounting firm Deloitte to conduct a review of its football officiating, reacting in part to what Commissioner Greg Sankey called the intense, often opinionated view of referees by the public and media.

Sankey said conversations began in September about ways to examine officiating and find ways to better communicate with the public about the overall quality of the work done by referees at a time when scrutiny and criticism has never been more pervasive. He said the SEC was not responding to a particular problem and does not consider the review an audit. He did not disclose how much it cost.

"I believed then and I still believe we have as good a college football officiating program as there is yet we can still keep improving," Sankey told The Associated Press. "And we started first looking at how do we communicate about officiating? And it was forward looking to this coming season that the nature of media, the focus on officiating, the fact there are commentators and broadcast booths giving opinions, sometimes they're right, sometimes they're not correct. You don't have complete information. Those are game changers for us."

The Pac-12 is awaiting the results of an external review of its football officiating that was commissioned by the conference last season. That came in response to controversy involving a conference executive giving input to replay officials that was deemed inappropriate.

Sankey said the SEC needs to be transparent when mistakes are made, but cannot be silent while officials face unjust criticism.

The results of the review will not be released publicly but were being shared with coaches, administrators and university presidents at this week's SEC spring meetings in Destin, Florida. Sankey said it would include statistical analysis from game and officiating reports; interviews with coaches, athletic directors and officials, along with former coaches and players; and potential best practices from other leagues that could be used by the SEC.

The SEC is considering using its network and website to provide more information about officiating, from training to game day routines to rules, Sankey said.

"There are times where we've had to engage. And the world has changed around us. We have to adapt our communication strategies to that reality," Sankey said. "And that's why this conversation began, now, nine or 10 months ago as we tried to determine the best way to adapt and to change and to share information.

"We want to communicate that we do have people with great integrity who are working as officials both in our program and as people who support our officiating program."