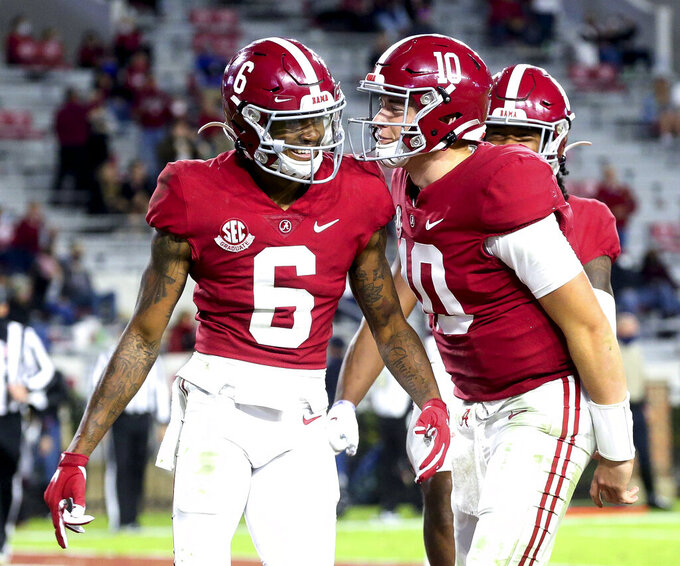 Alabama wide receiver DeVonta Smith (6) and quarterback Mac Jones (10) celebrate a touchdown pass during the second half of an NCAA college football game against Mississippi State on Saturday, Oct. 31, 2020, in Tuscaloosa, Ala. (Gary Cosby Jr./The Tuscaloosa News via AP)

A season of league-only games in the Southeastern Conference isn't for the meek — or the mediocre.

The SEC has reached (roughly) the halfway point of the 10-game season with four teams ranked in the top 10 — No. 2 Alabama, No. 5 Georgia, No. 7 Texas A&M and No. 8 Florida — and nine with losing records.

Only the Crimson Tide (6-0) remains unbeaten, having already decisively beaten the Bulldogs and Aggies. Alabama appears destined to run away with the SEC West, since it has already beaten the most legit potential challenger Texas A&M. Defending national champion LSU has flopped badly.

Georgia and Florida are the only teams in the East with winning records. So that division will almost surely come down to the outcome of their game Saturday in Jacksonville, Florida.

AP Sports Writers covering the SEC voted on an assortment of midseason awards, good and bad. Here are the results:

COACH OF THE FIRST HALF

Nick Saban, Alabama (4 votes): He has overcome his own COVID-19 scare after a false positive before the Georgia game, and so far the season-ending injury to star wide receiver Jaylen Waddle. Georgia and Texas A&M appeared to be the hardest tests ahead of the SEC championship game. Others receiving votes: Sam Pittman, Arkansas (3); Jimbo Fisher, Texas A&M (1).

OFFENSIVE PLAYER OF THE FIRST HALF

DEFENSIVE PLAYER OF THE FIRST HALF

FRESHMAN OF THE YEAR

Arkansas: The Razorbacks (four votes) are 2-3 with a narrow miss at Auburn, which got a key officiating call in its favor. It's a big sign of progress after the Chad Morris era and the arrival of Florida transfer QB Feleipe Franks has been a big help. Others receiving votes: Texas A&M (3) and Missouri (1).

LSU (six votes): The defending national champions lost massive talent from a 2019 season that was one of the best in SEC history. The Tigers aren't defending much of anything right now. They're 89th in total defense and are averaging 33.6 points, which ranks 73rd. At least LSU won something in a landslide. Others receiving votes: Kentucky 1, Mississippi State 1.

Derek Mason, Vanderbilt (six votes). It’s not just that Vanderbilt has been outscored 153-47 in its winless start, but three of its four losses have come against teams with losing records. Others receiving votes: South Carolina coach Will Muschamp (1), LSU defensive coordinator Bo Pelini (1).

Jaylen Waddle, WR, Alabama (seven votes). The Tide star receiver and punt returner was one of the nation's most electric playmakers. He was lost for the season with a broken ankle on the opening kickoff against Tennessee. Others receiving votes: Georgia DB Richard LeCounte.