SEC might decide to sit out this year's coaching carousel 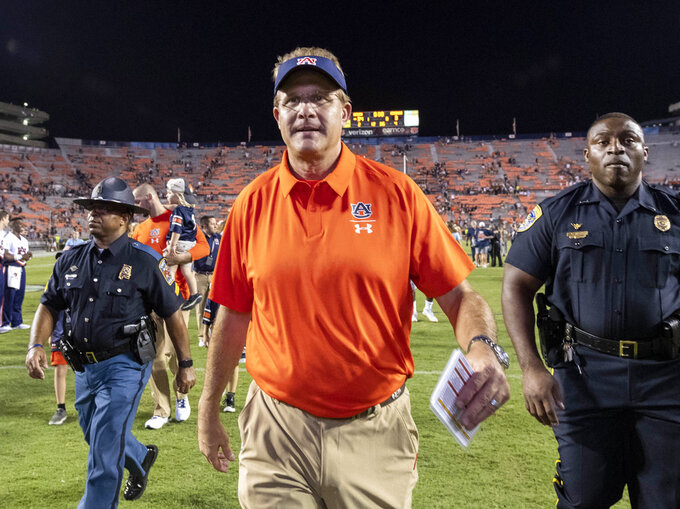 FILE - In this Sept. 22, 2018, file photo, Auburn head coach Gus Malzahn walls off the field with a 34-3 win over Arkansas in an NCAA college football game, in Auburn, Ala. While at least one coach has been fired already in each of the other Power Five conferences, the SEC doesn’t have anyone on an obvious hot seat heading into the final weekend of the regular season. Barring a surprise move, 2019 would mark the first time since 2006 that the SEC begins a season with no new head coaches. (AP Photo/Vasha Hunt, File) 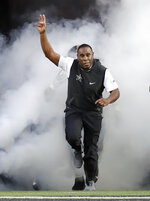 Southeastern Conference teams may not bother taking a spin on this year's coaching carousel.

While at least one coach has been fired already in each of the other Power Five conferences, the SEC doesn't have any coach on the brink of being let go heading into the final weekend of the regular season. Barring a surprise move, 2019 would mark the first time since 2006 that the SEC begins a season with no new head coaches.

"It's unusual," said former Arkansas and Mississippi coach Houston Nutt, who now works as an analyst for CBS Sports. "Everyone ought to be happy and working even a little bit harder since the ax didn't fall."

The potential lack of coaching movement in the SEC doesn't necessarily mean schools are getting more cautious about making changes.

After all, five of the league's 14 members had new coaches this year. The only SEC coaches who started their current jobs before 2016 are Alabama's Nick Saban, Auburn's Gus Malzahn, Kentucky's Mark Stoops and Vanderbilt's Derek Mason. Things had to settle down at some point just to give all these new coaches a chance to prove themselves.

Various circumstances helped out some coaches whose jobs otherwise might have been in jeopardy.

Auburn (7-4, 3-4 SEC) is out of the Top 25 after being ranked as high as seventh this year, but Malzahn is in the first year of a seven-year, $49 million deal and firing him would be costly.

Malzahn's buyout after this season would be $32 million. Both athletic director Allen Greene and Auburn President Steven Leath have said Malzahn will be back next season.

"There's no doubt," Malzahn said last week. "I'll be the coach and we'll get this thing turned around. That's what we're going to do."

Mason owns a 23-37 record in five seasons at Vanderbilt. The Commodores (5-6, 2-5) would earn their second bowl bid in three years with a victory over Tennessee this week but will clinch a fifth straight sub-.500 season with a loss.

Although Vanderbilt is considered the toughest job in the SEC, Mason inherited a program that had posted back-to-back 9-4 records and Top 25 finishes under James Franklin. Mason still seems safe with Vanderbilt's athletic department in transition.

David Williams II announced in September he would step down as Vanderbilt's athletic director once a replacement is hired. It would be rather unusual for a lame-duck athletic director to make a coaching change by removing a guy he'd hired.

Senior quarterback Kyle Shurmur offered his support for Mason, who is seeking a third consecutive victory over Tennessee. The Commodores haven't beaten Tennessee three straight times since the 1920s.

"Coach Mason has been consistent since day one with his message, and I think we've all grown," Shurmur said. "He's a great coach, and I think he's going to be here a long time."

Any questions about Missouri coach Barry Odom's future likely were answered when the Tigers won their last three games to improve from 4-4 to 7-4. Odom has an 18-18 mark in three seasons.

South Carolina (6-4, 4-4) is having a somewhat disappointing season, but Will Muschamp is 21-15 and headed to a third straight bowl appearance with a program that went 3-9 the year before his arrival. South Carolina gave Muschamp a new six-year, $28.2 million contract after the Gamecocks went 9-4 last season.

Because most SEC positions are viewed as destination jobs, most coaching changes in this league come when someone gets fired rather than somebody leaving for a better opportunity.

That said, Kentucky's emergence this season could cause other Power Five athletic directors to check on the potential availability of Mark Stoops, who owns a 34-39 record in six seasons. A victory over Louisville on Saturday would give Kentucky (8-3, 5-3) its highest regular-season win total since a 10-1 finish in 1977.

The Wildcats' seventh win this season added another year to the contract extension Stoops signed in March 2017 and makes it now run through June 2024. If Kentucky beats Louisville and also wins its bowl game to finish 10-3, Stoops would get a second year added to his contract extension.

"Mark has done great work steadily building this program as he set out to do when he became our coach six years ago," Kentucky athletic director Mitch Barnhart said via email. "Over that time, Kentucky has become home for him and his family and he has forged a great connection with our fans and our state. Considering our conference, our facilities and our fan base, UK is a great place to be and we are excited about what the future holds here."

Although Kentucky's persistence with Stoops through his early struggles paid off this season, Nutt doesn't expect that to cause other SEC teams to become more patient with coaches.

Nutt instead believes the likely lack of coaching changes this year virtually assures plenty of moves next season.

"That's just the way the league is," Nutt said. "It's so competitive, so hard. Everybody wants to win - and to win yesterday - and everybody can't win. So it's just a very, very tough deal."