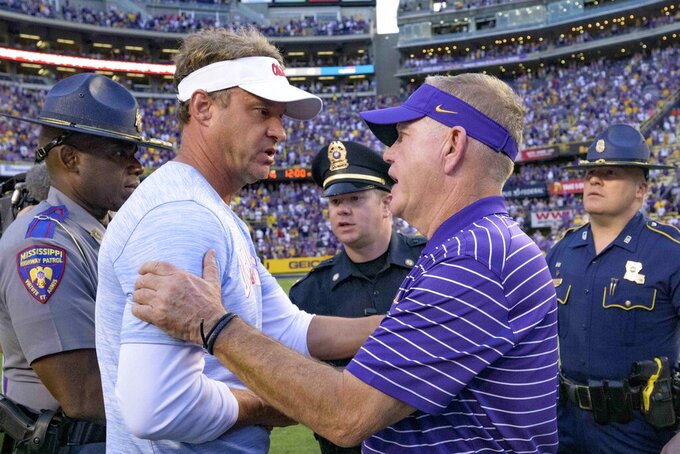 COLUMBIA, S.C. (AP) — They are iconic moments in college football: Fans rushing the field to celebrate landmark victories, almost all with joyous intentions of honoring their team's success.

The unforgettable scenes have never been more unwelcome in the Southeastern Conference.

The league has tried to curtail crowd rushing for nearly two decades with hefty fines and pre-game planning amid concerns over safety and potential liability.

“When people want to go, they want to go,” SEC Commissioner Greg Sankey said on the SEC Network last week. “But we have to re-train people to stay in the stands.”

Fans at Neyland Stadium filled the field when the Vols ended a 15-game losing streak to Alabama with a wild, 52-49 victory on Oct. 15. There was barely space to move and the Crimson Tide had trouble finding a clear path to the locker room and fans tore down the goalposts and took them to the Tennessee River.

A video appeared to show Alabama receiver Jermaine Burton making contact with a female fan while coming off the field.

“I talked to him,” Crimson Tide coach Nick Saban said. “He was scared. I was scared. Some of our other players were scared.”

The SEC has had a policy on field or court storming in place since 2004. It fines a school $50,000 for a first offense, then increases it to $100,000 for a second offense and $250,000 for each one after that. The fine money is deposited into the SEC Post-Graduate Scholarship Fund.

The SEC fined Tennessee $100,000 for its second violation of the policy. LSU — whose fans rushed the field moments after a 45-20 win over Mississippi, which was ranked No. 7 at the time — was docked $250,000 for its third violation.

Brian Kelly, LSU's first-year coach, was doing an on-field postgame interview when his police detail told him to leave as people rushed forward.

“It didn’t appear to me there as anything in my mind where this would be a game where we would storm the field. Let’s do more of it, I guess. I hope I don’t get in trouble for that,” he said. "I mean, let’s win more.”

It was a sold-out stadium last Saturday night when South Carolina beat Texas A&M 30-24 for the first time since the Aggies joined the SEC in 2014. Security personnel surrounded the field late and several announcements were made cautioning people to stay off the field. Some in the crowd booed, but remained in the stands as the teams left the field.

Other Power Five conferences have different ways of dealing with field storming.

In the Big 12, schools are only fined if there isn't a clear path for teams to get off the field and into their locker rooms. Texas Tech and TCU were both fined $50,000 and publicly reprimanded for field storming after victories, the Raiders over Texas and the Horned Frogs over Oklahoma.

TCU was not fined for fans on the field when it beat top-10 Oklahoma State two weeks ago.

TCU athletic director Jeremiah Donati said on social media following the Oklahoma win the school "fell short of meeting the conference’s sportsmanship standards post-game. We must always be respectful to the opposing team when celebrating in these moments.”

The Atlantic Coast Conference has no policy on field storming, spokesman Kevin Best said in an email to The AP. In fact, Clemson has a post-game routine, “Gathering at the Paw,” where fans enter the field after all Death Valley games.

In the end, how safe you feel depends on whether you won or where you play, South Carolina tight end Austin Stogner said.

The Oklahoma transfer had fans on the field twice last season The first was the Sooners' comeback victory over Texas in the Red River Rivalry. “That's when we won so that was kind of cool. I knew all those guys" who did it then, he said.

The other was at Baylor, which defeated Oklahoma 27-14 to end the Sooners' best-in-the-nation 17-game win streak. “No one was going to hit me,” Stogner said. “I mean, it's Baylor.”