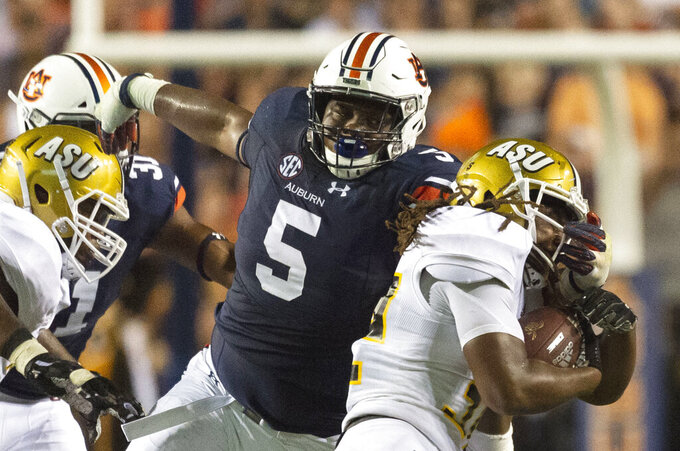 FILE - In this Sept. 8, 2018, file photo, Auburn defensive lineman Derrick Brown (5) stops Alabama State running back Tallesin Farmer (32) during the first half of an NCAA college football game, in Auburn, Ala. The SEC, a conference that prides itself on producing great defensive linemen and linebackers, must find candidates to replace all the guys heading into the pros. Alabama’s Raekwon Davis and Auburn’s Derrick Brown both enter the summer as legitimate All-America candidates as they attempt to lead their teams. (AP Photo/Vasha Hunt, File)

KNOXVILLE, Tenn. (AP) — This week's NFL draft showcases some of the Southeastern Conference's top defensive players from a year ago.

It also is a window into the SEC's challenges this year.

Now a conference that prides itself on producing great defensive linemen and linebackers must find candidates to replace all the guys entering the pros. Tennessee coach Jeremy Pruitt doesn't expect that to be a major problem.

The SEC's definitely losing some elite defenders. ESPN draft analysts Mel Kiper Jr. and Todd McShay did a combined mock draft last week that had Allen, Williams, White and Sweat all getting taken within the first eight overall picks and Simmons going later in the first round.

Alabama's Raekwon Davis and Auburn's Derrick Brown earned second-team all-SEC honors from the AP last season. The two linemen enter the summer as legitimate All-America candidates as they attempt to lead their teams.

"That's the whole reason I came back, to teach the younger guys and just help the team (as much) as I can, to the best of my ability," Davis said.

Tennessee outside linebacker Darrell Taylor had eight sacks in 2018 - the most of any returning SEC player - but must get more consistent after collecting seven of those sacks in just two games. Texas A&M returns Justin Madubuike, who had 10 ½ tackles for loss and 5 ½ sacks last year.

The SEC also should get breakthrough seasons from plenty of pass rushers who haven't yet made names for themselves. That happens just about every year in the SEC.

"The biggest thing that sticks out in the SEC on the front four is the athleticism," Mississippi State coach Joe Moorhead said. "On a consistent basis, there are guys who can stop the run, rush the passer and do some unique things from a blend of size and skill that you don't find many other places."

Here are some other SEC stories to watch.

Nobody in the SEC had to worry about adjusting to a new head coach this spring. After five of the league's 14 members had new coaches in 2018, the league didn't make any head coaching changes this offseason. This shapes up as the first season since 2006 in which the SEC has no first-year coaches.

Alabama and Georgia faced off in last season's SEC championship game after the Crimson Tide edged the Bulldogs in the College Football Playoff championship game a year earlier. Those two teams could meet in December again this season as they'll head into the fall as clear favorites in their respective divisions.

Ball State graduate transfer Riley Neal, who made 32 starts at his former school, is competing with Deuce Wallace for the right to take over for four-year starter Kyle Shurmur at Vanderbilt.

With so many experienced quarterbacks in the East, most of the notable quarterback competitions are in the West.

Auburn has freshman early enrollee Bo Nix and Joey Gatewood seeking the job. Mississippi State is choosing between Keytaon Thompson and Jalen Mayden. SMU transfer Ben Hicks worked out with Arkansas this spring and will receive a challenge from Texas A&M transfer Nick Starkel this summer.

SEC teams made changes at nearly 40 percent of the offensive and defensive coordinator positions during the offseason.