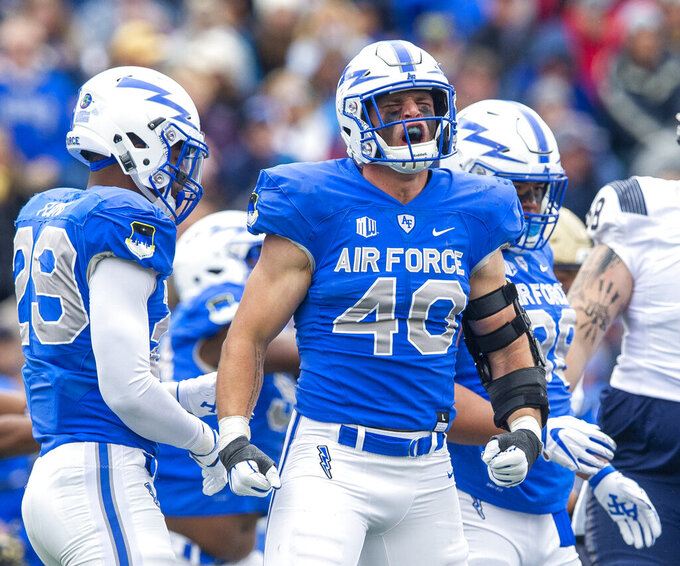 FILE - In this Oct. 6, 2018, file photo, Air Force linebacker Kyle Johnson (40), center, celebrates after a play against Navy in Colorado Springs, Colo. Air Force linebacker Kyle Johnson spent the summer interning at a think tank in Washington, D.C., that provides data-driven analysis on global conflict. He can't get too specific. The information is sensitive and classified. He can certainly reveal his game plan: To lead the Falcons back to a bowl game, attend graduate school, special operations training and one day be a leader in the intelligence community. (Dougal Brownlie/The Gazette via AP)

AIR FORCE ACADEMY, Colo. (AP) — Air Force senior linebacker Kyle Johnson did some mapping and data collecting during his confidential summer internship at a think tank in the nation's capital.

Sorry, that's really all he can reveal. His work was either sensitive or classified.

He does have clearance to divulge his long-term game plan: Attend graduate school, go through special forces training and down the road become a leader in the intelligence community.

More immediately, and hardly hush-hush, Johnson wants to lead the Falcons back to a bowl game. The secret's certainly out on the hard-hitting, ball-hawking inside linebacker who runs like a safety.

"On a scale of 1 to 10, he's a 100 in terms of being an alert and instinctive football player," Air Force coach Troy Calhoun said. "He is focused and he is driven."

An apt description — focused on the now and driven toward the future.

About the now: The 6-foot, 225-pound Johnson 's mind is strictly on Colgate in the season opener on Aug. 31 at Falcon Stadium. It's the first step in helping the Falcons bounce back after two straight 5-7 seasons. They're predicted to finish third in the Mountain division of the Mountain West.

"As far as pure talent goes, this is the best team we've had since I've been here," said Johnson, a management major/Spanish minor from Jacksonville, Florida. "It's all about how we capitalize and use that potential."

About the future: He's got his path carefully mapped out to accomplish his goal of becoming a top figure in the world of intelligence by the time he's in his 50s .

Over the summer he worked with C4ADS, a nonprofit think tank in Washington, D.C., that provides data-driven analysis on global conflict and security issues. On its website the company said it uses "cutting-edge technologies to manage, integrate, and analyze disparate data from diverse languages, regions, and sources, incorporating our own field research from conflict zones and fragile states."

Johnson couldn't get into specifics about his role with C4ADS given the sensitive or classified nature of various projects. He did write a dossier that just might wind up in the hands of an intelligence agency.

Now that sure would look good on a graduate-school application.

Then, it's on to special forces training to fulfill his military duties. Maybe through the Air Force or possibly a cross-commission program with the Army Green Berets or Navy SEALs.

"There's a clear pipeline to the intelligence agency especially from the officer corps," said Johnson, who completed a language immersion program a summer ago and was on the cadet leadership team during survival training. "There's a lot of ways to make the world a better place. In the short term, reducing and subtracting negatives is probably the most efficient. When my body can no longer support the lifestyle of an operator, I can move on to using what God's given me up here (his head) and make an even bigger impact."

Hence, his designs on going into the intelligence field.

"I'm hoping to bring a moral purpose and a modern perspective," Johnson said.

He couldn't disclose more of his vision than that. Not because it's classified, but because it's actually part of his grad-school essay.

There's one thing that could put his plans on temporary hold — a chance in the NFL. President Donald Trump recently said he is looking into offering a waiver that would allow athletes attending the nation's military academies to play professional sports immediately upon graduation. Under the current framework, athletes have to serve two years of active duty before applying for reserve status to pursue a career in professional sports.

"If I play really well, of course I'd love to have that opportunity," Johnson said. "But that's selfish. More than me, I'm part of a team. That's bigger than what I am. My commitment is to be the best football player I can right now for them."

Johnson is coming off a season in which he was second on the team in tackles (70) and tackles for loss (7 ½). He also returned an interception 32 yards for a TD against Stony Brook.

"Kyle is a character," friend and defensive back Jeremy Fejedelem said. "He's always high-energy and a super-athletic football player. You can expect a lot of big things out of Kyle."