SEC's early season neutral-sites games might be on the clock 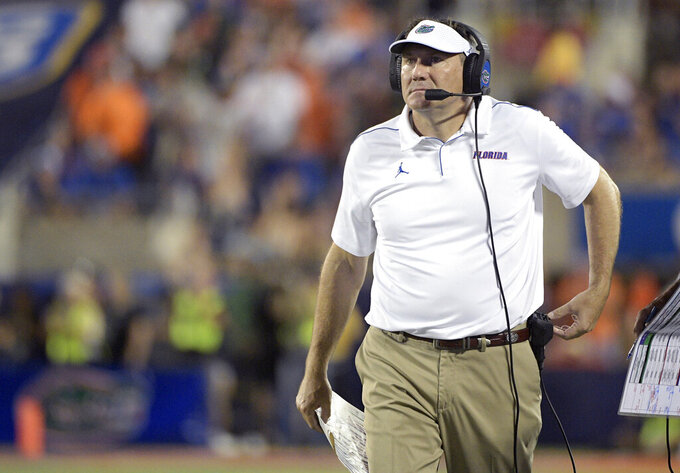 FILE - In this Aug. 24, 2019, file photo, Florida head coach Dan Mullen watches from the sideline during the second half of an NCAA college football game against Miami in Orlando, Fla. This is the time of year when the Southeastern Conference usually validates its claim as the best league in college football by dominating neutral-site nonconference matchups. The SEC is 21-6 in regular-season nonconference games against Power Five opponents at neutral sites since 2012. (AP Photo/Phelan M. Ebenhack, File)

KNOXVILLE, Tenn. (AP) — This is the time of year when the Southeastern Conference usually validates its claim as the best league in college football by dominating neutral-site nonconference matchups.

No. 8 Florida's 24-20 victory over Miami last week at Orlando, Florida, improved the SEC's record to 21-6 in regular-season nonconference games against Power Five opponents at neutral sites since 2012. Alabama is 9-0 in these types of games since 2008.

"We've had a lot of games in Atlanta, we've had some in Dallas, we've had some other games in other places, that have given the program a lot of exposure, which I think is really important," Alabama coach Nick Saban said. "I think when you play a good opponent early on the whole focus in the offseason, spring practice, fall camp, is always a little better because players feel they're going to be challenged in the first game."

No. 2 Alabama meets Duke in Atlanta on Saturday while No. 16 Auburn faces No. 11 Oregon at Arlington, Texas, and South Carolina plays North Carolina at Charlotte, North Carolina.

These neutral-site showdowns might not be so common several years from now. More of them eventually could take place on campuses instead of NFL stadiums.

SEC schools are upgrading future schedules by adding noteworthy home-and-home nonconference series, though some of those games are a decade away from happening.

"With more home-and-homes coming on board here, that might restrict and cut into the number of neutral-site games moving forward," said Dave Brown, the former ESPN head of college football scheduling whose Gridiron software is used by many schools to arrange nonconference matchups.

"We are looking at it and saying, 'OK, the future of college football is these home-and-home games,' " Florida coach Dan Mullen said. "I think they may possibly make it more attractive for people to come to the games and create that game-day environment that (makes it) more exciting to see a different opponent that maybe we don't always see in the Swamp."

The SEC has led all conferences in average attendance every year since 1998, but it's not immune to recent industry-wide struggles to attract spectators. Average attendance has slipped three straight seasons and hit 73,994 last year, its lowest mark since 2002.

"TV people talk about content - content is king," Texas A&M athletic director Ross Bjork said. "We have to look at it the same way. What content do we have to drive our fan experience, drive ticket sales, help promote the university, market the university?"

For instance, Tennessee received $2.85 million for facing Georgia Tech in Atlanta's Mercedes-Benz Stadium in 2017 and got $2.9 million for meeting West Virginia in Charlotte last year. Tennessee expects to receive $3.8 million per home game in ticket sales alone this season, before parking or concession revenues are included.

That doesn't tell the whole story, though.

LSU executive deputy athletic director Verge Ausberry says it takes about 3,000 workers to put on a game at Tiger Stadium. But at neutral site games, LSU doesn't have to worry about scheduling and paying for "the guy taking the ticket, security, the people working concession stands," Ausberry said.

"That's why we do a mix" of home-and-home series and neutral site games, Ausberry said. "It's important we do that."

And only the home team gets much revenue in a home-and-home series. That helps explain the recent Alabama strategy of scheduling seven home games plus one neutral-site matchup each year.

"In that first year (with a home-and-home), you're making money, but in the second year you're not making any money when you go on the road," said Gary Stokan, the president and CEO of the Chick-fil-A Kickoff Game in Atlanta. "What Nick Saban and Alabama have done is schedule neutral-neutral so they make a financial windfall each of those years."

Alabama is scheduled to make $4.5 million from the Duke game in exchange for purchasing and selling 29,588 tickets. Alabama received $4.5 million for facing Louisville in Orlando last year and will make $6 million for its 2020 game with Southern California in Arlington, Texas.

Then again, even Alabama has been scheduling more home-and-home series lately.

"I think our fans enjoy going to a lot of the neutral-site games that we have had and continue to have," Alabama athletic director Greg Byrne said. "However, there's also been a clamoring to bring teams to our campuses. Everything runs its course. There's a time frame in what you're doing that says, 'Is there a way to keep things fresh?' "

"If you're playing a road game and win that road game and it's a national-type game, that's going to help you in the playoff picture versus maybe more of a neutral-site game," Bjork said.

Stokan believes neutral-site games will keep thriving even as more teams add home-and-home series. He can cite his own game's crowded schedule as evidence.

"Frankly we've changed the face of college football in nonconference scheduling, particularly on the front side of the year," Stokan said.

But if programs continue arranging more home-and-home matchups, it could limit the marketplace for these neutral-site games five to 10 years from now.