Settled at QB: No. 5 Georgia has its man in JT Daniels 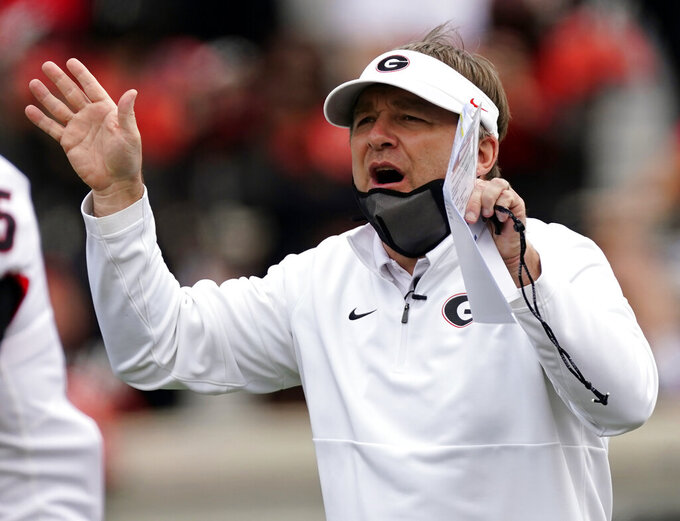 FILE - In this April 17, 2021, file photo, Georgia head coach Kirby Smart talks to his players before the team's spring NCAA college football game in Athens, Ga. Smart, the coach of No. 5 Georgia, faces No. 3 Clemson in the season-opener in Charlotte, N.C. (AP Photo/John Bazemore, File)

JT Daniels starred for a powerhouse team in high school.

He launched his college career at one of the most storied programs in the nation.

Yet none of that quite prepared this laid-back Californian for the passion that goes along with playing for the Georgia Bulldogs, for playing in the Southeastern Conference.

“Football is just another thing on the West Coast vs. football being THE thing here,” Daniels said. “I still remember the first time me and my family drove from the Atlanta airport to Athens and seeing all the Georgia Bulldog flags flying everywhere, to experience what it's like for football to be such a main focal point. I've loved it ever since I got here."

Now, in what very well could be his only full season as Georgia's starting quarterback, the Bulldogs and their red-and-black faithful are optimistic that Daniels can lead them to an elusive national championship.

He gave them a tantalizing glimpse of what he can accomplish after moving to the top of the depth chart late in the pandemic-plagued 2020 season.

Daniels guided the Bulldogs to four straight victories, throwing for 401 yards and four touchdowns in his Georgia debut against Mississippi State and capping the season by rallying the team to a last-second triumph over Cincinnati in the Peach Bowl.

But none of those opponents was on the level of Georgia's season opener Saturday, when the No. 5 Bulldogs take on the third-ranked Clemson Tigers in Charlotte.

If Daniels is hyped for the moment, it doesn't show.

“I approach it the same way I do anybody else — it's just another game of football,” he insisted. “It's cool to have a game like this in Week 1. But if we beat Clemson by 100 and lose the rest of the season, we're not going to make it to the SEC (championship). And if Clemson wins by 100, we can still win the SEC if everything else goes out way.”

It's clear this is the sort of game that Daniels has long expected to play a leading role in, going back to his days at Mater Dei High School near Los Angeles.

The private school has produced a plethora of top athletes across a wide range of sports, so there was plenty of attention on Daniels after he threw for more than 12,000 yards — with an astonishing 152 touchdowns and just 14 interceptions — over his high school career.

Daniels was one of the nation's top recruits — No. 1 on some lists — when he signed with Southern California ahead of the 2018 season. He quickly locked down the No. 1 job in preseason camp to become just the second true freshman quarterback to start for the Trojans in his first game.

To that point, everything was going according to plan. But Daniels looked a bit overwhelmed that first season and USC struggled to a 5-7 mark. He held on to the starting job the next season, only to sustain a season-ending knee injury in the opener.

When it became clear the Trojans were going in a different direction, Daniels decided to transfer to Georgia. The Bulldogs needed a replacement for three-year starter Jake Fromm, but the newcomer wasn't fully recovered from his knee injury and started out working with the scout team in non-contact drills.

While Georgia struggled to settle on a starter — starting with redshirt freshman D'Wan Mathis, quickly switching to former non-scholarship backup Stetson Bennett, and then giving Mathis one last shot — Daniels stoically put in the work to persuade the Bulldogs that he was completely healthy.

“I was impressed with how he handled it,” said Georgia linebacker Nakobe Dean, who got in a lot of work against Daniels in practice. “Coming from where he came from and who he was, how he handled being on the scout team, how he attacked it every day, gave us all the confidence in the world in him.”

When Daniels finally earned the starting nod, Georgia's hopes of winning the SEC had faded with losses to Alabama and Florida.

But his performance over those final four games — Daniels completed 67.2% of his throws for 1,231 yards, with 10 touchdowns and two interceptions — has given the Bulldogs a huge boost of confidence heading into a season that has again raised hopes of claiming their first national title since 1980.

“Everyone on this team is on his back," Dean said. ”We're counting on him to lead this team."

The California kid has quickly become one of the most popular players in the Bulldog Nation.

Daniels even landed an NIL sponsorship from Zaxby's, which operates a popular chain of fast-food chicken restaurants across the South.

But Daniels isn't thinking about chicken.

He's focused on the Tigers.

“I've been consistent with this,” Daniels said. “If a deal makes sense and it's not a time factor, it's not going to take attention away from anything that matters, then we do it.”

After last year's dizzying routine of quarterback musical chairs, Georgia coach Kirby Smart is thrilled to have the most critical position on the field locked down.

Especially when the opener is against a team that has won a pair of national titles in the last five years.

“I am extremely confident in his preparation and his focus; that is not a concern for me,” Smart said. “The distractions of the outside world really aren’t distractions for JT. He has a single-minded focus all the time on being his best and being the best leader he can.”