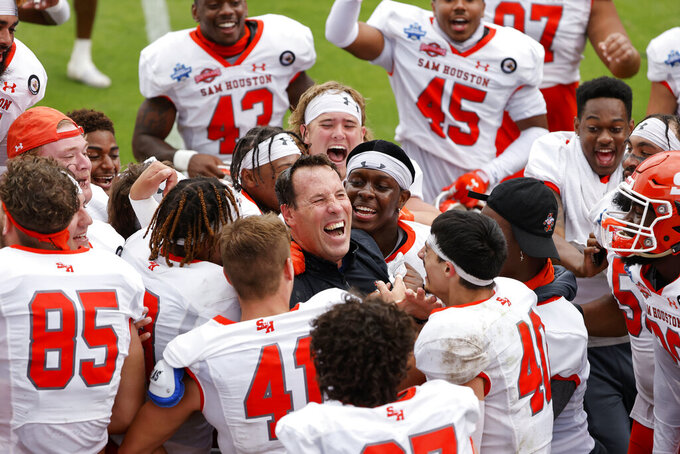 FILE - Sam Houston State head coach K.C. Keeler, center, is swarmed by his team after they defeated South Dakota State in the NCAA college FCS Football Championship in Frisco, Texas, in this Sunday May 16, 2021, file photo. Sam Houston State won 23-21. Keeler didn't ask his Sam Houston players to stick around long after they won the school's first FCS national championship last May, capping a long and draining season — physically and emotionally — because of the pandemic. He's also not asking them to stick around as long at practice this year. Throughout the Championship Subdivision, coaches are making concessions this fall to acknowledge that the quick turnaround from last spring is hard. (AP Photo/Michael Ainsworth, File)

K.C. Keeler didn't ask his Sam Houston players to stick around long after they won the school's first national championship last May, capping a long and draining season — physically and emotionally — because of the pandemic.

He's also not asking them to stick around as long at practice this year.

Throughout the Championship Subdivision, coaches are making concessions this fall to acknowledge that the quick turnaround from last spring is hard.

Practices that typically had 24 sessions in the Huntsville, Texas heat?

“We’re down to 19 periods,” Keeler said. “I give them a halftime after like the 11th or 12th period every day where they literally just go over and hydrate."

Keeler sent his team home after the championship win and didn't have them return until June 28, when the community finally honored them with a parade.

When the Bearkats resumed practice Aug. 4, just 80 days had passed since they beat South Dakota State 23-21 for the title on a pass with 16 seconds to play. With the season opener set for Sept. 2, that is 108 days between games for the Bearkats. Between the 2018 and 2019 seasons, the last time things were normal, Sam Houston had 286 days between games.

By the time this regular season ends, assuming it goes on as scheduled, Sam Houston will have played 20 games in 2021 — with the potential for postseason games a very real possibility.

Sam Houston is one of many programs that have banned, or severely limited, tackling in practice, but not every highly regarded program follows suit.

“Football is a collision sport,” James Madison coach Curt Cignetti said, “... and you still have to develop the toughness, the mindset of your team in camp. So, we’ve had a physical camp. Everybody wanted a physical camp.”

The Dukes, who played eight games in the spring, make concessions elsewhere, beating the heat by practicing in the morning, and gradually dialing things back in practice as the season wears on, Cignetti said.

Down the road at VMI, the Keydets are coming off their first winning season in 40 years. Coach Scott Wachenheim wants to keep the momentum going, but not at the risk of wearing his players out.

His players, though, have been eager to get back to work, hoping to build off what they accomplished in going 6-2 last season before losing in the playoffs at James Madison. The playoff berth was the first in school history.

“Everything’s fresh in your mind. You’re just still in kind of game shape because a lot of the guys were here in the summer," said linebacker Stone Snyder, the Southern Conference defensive player of the year.

Jakob Herres, the Keydets' All-American wide receiver, agreed. He played on a team that went 1-10 when he was a freshman and 5-7 as a sophomore.

“I think once we all got that little taste of what winning was like, we didn’t want to let it go back to what it was,” Herres said this week.

“The spring spring season was definitely tough on the body, you know, starting in the cold and everything like that, practicing outside,” he said, “... but I really only took about a week’s break and kind of just got right back to it.”

The FCS season begins on Aug. 28. Sam Houston is the preseason No. 1, followed by James Madison, South Dakota State, North Dakota State and Delaware in the top five.