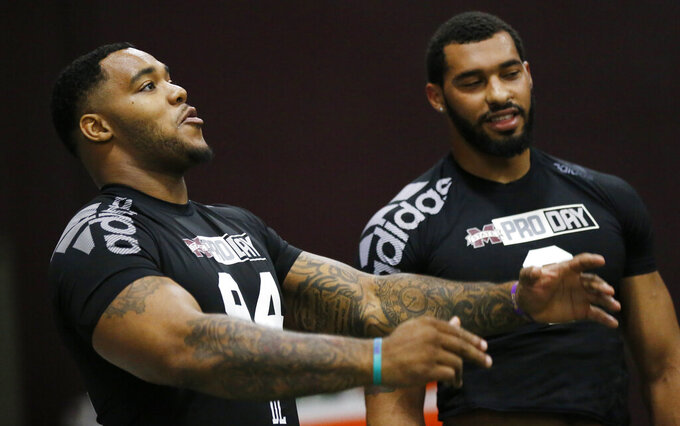 Former Mississippi State defensive players Jeffery Simmons, left, and Montez Sweat, joke around during Pro Day at the university, as other players were being tested by NFL football scouts and coaches, Wednesday, March 27, 2019, in Starkville, Miss. Sweat ran some agility drills, while Simmons stayed on the sidelines as he recovers from a leg injury. (AP Photo/Rogelio V. Solis) 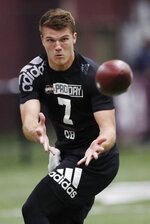 STARKVILLE, Miss. (AP) — Mississippi State's Jeffery Simmons has the look of a future NFL player after a prolific three-year college career. He's also wearing a big brace on his knee after tearing his ACL last month, not to mention a checkered past that includes a video from high school showing him punching a woman.

The Bulldogs had 19 players — including potential first-round picks like defensive end Montez Sweat and safety Johnathan Abram — work out for NFL scouts from all 32 teams at the school's pro day on Wednesday.

The hardest to evaluate might be Simmons, who despite the health and off-field concerns could be a first-round pick in the NFL draft.

Teams are certainly concerned about the defensive tackle's left knee, which he injured while working out in Florida last month. But many of the questions he's been asked are about an incident in 2016, when Simmons was arrested following a fight in which he was seen on video punching a woman.

He eventually was found guilty of malicious mischief and pleaded no contest to a simple assault charge . He was also suspended one game at Mississippi State.

"It's a mistake I made back in high school. I regret it."

He couldn't go through most workouts on Wednesday because of his knee, but did do the bench press, where he did 28 repetitions of 225 pounds.

Both of his coaches during college — including current coach Joe Moorhead and the man who recruited him Dan Mullen — have had nothing but positive things to say about Simmons during his Mississippi State career.

His teammates say they've been eager to vouch for Simmons when scouts have asked about his character.

"I tell them nothing but the truth," Sweat said. "He's a great player on the field and an even better player off the field. Jeffery's the kind of guy that me and him look toward each other the whole year and lean on each other. Off the field, he's that guy who is going to stay out of trouble and keep those younger guys out of trouble."

Simmons, Sweat and Abram are the three most high-profile NFL prospects on a Mississippi State defense that was one of the nation's best last year. The Bulldogs gave up just 263 yards and 13.2 points per game.

The likelihood of Sweat being a first-round pick seems fairly solid. The 6-foot-6, 260-pounder ran a 4.41-second 40-yard dash at the NFL combine in Indianapolis last month , the fastest time by a defensive lineman since at least 2003.

He didn't run the 40 on Wednesday, but did go through position drills.

"I've still got everything to prove," Sweat said. "I just talk about creating my own path and my own destiny. I'm not like all those other guys who sit out drills. I'm here to compete."

He was also very productive in his two seasons in Starkville, posting 29½ tackles for a loss and 22 sacks in 26 career games.

The 6-foot, 215-pound Abram became a coveted prospect during a stellar senior season where he finished with 99 tackles, including nine for a loss.

"Talking to a few GMs, they actually believe we'll have eight or nine guys drafted, and 11 or 12 guys should make teams," Abram said. "So it says a lot about Mississippi State."