Sims looks to lead Ga Tech to another upset vs No. 14 UCF 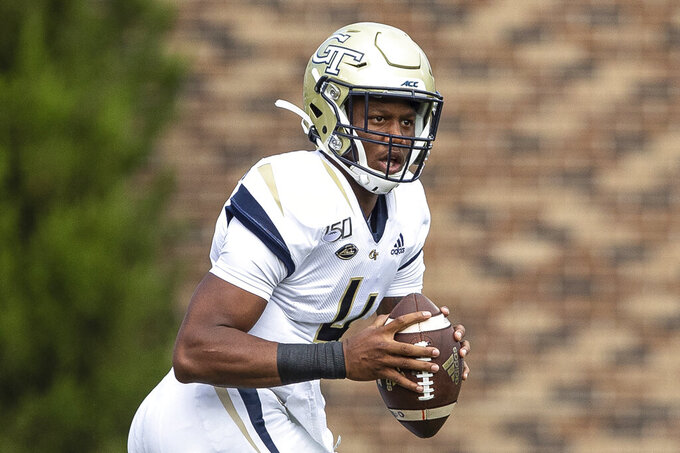 Sure, there were a couple of early interceptions he’d like to have back, but no one was complaining after Sims rallied Georgia Tech to an upset at Florida State in the season opener.

Now, Sims is set to face an even stiffer challenge when the Yellow Jackets host No. 14 Central Florida on Saturday.

He’s quickly become a big man on campus, reveling in a wave of accolades after becoming the first true freshman quarterback in Georgia Tech history to lead the team to victory in a season opener.

“My mom always taught me not to let anything get in my head,” Sims said. “After the game, she always told me to celebrate that night, but the next day you have to get back to work. That’s exactly what I did. I pushed off everything that happened (last) Saturday. Now I’m preparing for UCF. I want to be a leader on this team and do whatever I can to help this team win.”

Georgia Tech (1-0) will be facing a team that knows a lot about winning.

Over the last three years, UCF has won 35 of 39 games, becoming one of the best Group of Five programs in the country. The Knights’ opener is their only game against a Power Five opponent during the regular season, and they’re eager to shine before a national television audience.

“We’ve been good, I feel, for the last three to four years,” linebacker Eriq Gilyard said. “We’ve been playing with kind of a chip on our shoulder to prove everybody wrong. This year we’re not trying to prove anybody wrong, we’re trying to prove ourselves right. We know how good we are.”

The Knights are coming off a bit of a disappointing season by their lofty standards, losing three games — all on the road — by a total of seven points.

Dillon Gabriel, who seized the quarterback job early in his freshman season, said he’s far more prepared for those sort of tight games as a sophomore — despite the unusual offseason and a delayed start to the regular season because of the coronavirus pandemic.

“Now I know how to approach them,” said Gabriel, who threw for 3,653 yards and 29 touchdowns in 2019. “It feels a lot different. Even with all this uncertainty, I feel confident with our guys.”

Some things to watch for when Georgia Tech hosts UCF:

The UCF defense hopes to take Sims out of his comfort zone.

While the Knights aren’t known for bringing a lot of blitzes, they do play press coverage and look to deny the short and intermediate throws that worked so well for Sims in the opener.

“It’s critical for us that we create negative plays, get him into third-and-long situations, and try to put him in uncomfortable situations,” UCF coach Josh Huepel said. “That’s true with every young quarterback that you play.”

The Yellow Jackets are looking to bounce back from a miserable performance in the kicking game.

Freshman Jude Kelley had three kicks blocked by Florida State — two field goals and an extra point — but gathered himself to boot a game-winning 32-yarder in the fourth quarter.

Collins blamed himself for not giving the special teams more work in preseason practice because he was so concerned about making sure the players followed coronavirus protocols.

“That’s completely on me,” he said. “Hats off to our guys for regrouping on that game-winning field goal.”

UCF is counting on another big season from Greg McCrae, who rushed for more than 1,000 yards two years ago.

RUN TO THE BALL

The Knights are focused on creating more turnovers this season.

They had 21 a year ago — a significant drop from their average the previous two seasons (30) — and five of those came during a bowl win over Marshall.

FANS IN THE STANDS

Georgia Tech is allowing a socially distanced crowd of about 11,000 for the game at 55,000-seat Bobby Dodd Stadium.

Fans will be required to wear masks except when their eating or drinking at their seats. Georgia Tech athletic director Todd Stansbury said ushers would be moving through the stands to make sure everyone abides by the mandate.

“A lot of people will be watching us to see if we can pull this off in a safe manner,” Stansbury said. “Our athletes know they must represent their teams in the right way at all times. We’re asking our fans to do the same.”